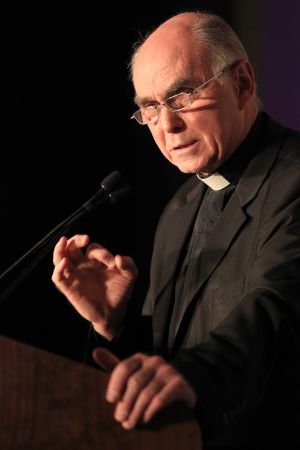 WASHINGTON (CNS) — The focus thus far by Pope Francis on the church’s responsibilities to the poor are certainly not new, and there will continue to be new challenges as his attention encompasses other aspects of Catholic social teaching, suggested Father J. Bryan Hehir in an address to people who work in social ministries.

Neither the much-heralded first 100 days of President Franklin Roosevelt’s administration or the renowned 1,000 days of the John F. Kennedy presidency “had the global impact that Pope Francis has had” in the first months of his papacy, said Father Hehir, speaking Feb. 3 at the Catholic Social Ministries Gathering.

Father Hehir is secretary for health care and social services for the Archdiocese of Boston and a professor in religion and public life at Harvard University.

The priest told the annual gathering that the focus on the poor and society’s inequities that Pope Francis has made a centerpiece are part of a Catholic tradition that goes back centuries, although the formal Catholic social teaching has a more recent history, only 135 years or so.

The pope’s November apostolic exhortation, “Evangelii Gaudium” (“The Joy of the Gospel”) carried many echoes of a previous major church document on social teachings, “Gaudium et Spes,” the Second Vatican Council’s Pastoral Constitution on the Church in the Modern World, he said.

“Gaudium et Spes,” the last document of Vatican II, made it clear that the church has a responsibility to be involved in the world’s social actions, he said.

Before that, while there was a clear tradition of such responsibility, “there was a question whether it was a required part of the course or extra credit,” for Catholics, Father Hehir said.

Social justice responsibilities were important themes for other popes, too, he observed, but Pope Francis has come at them in new ways, which have caught the attention of the world.

Father Hehir, quoted the late Jesuit theologian Father John Courtney Murray, who said Catholic teaching has to have a center — grounded in tradition and Scripture — as well as a ‘”growing edge,” that brings the teaching out into the world. “Francis stands on the growing edge of Catholic social tradition,” he said.

The pope’s role at that growing edge will be shaped by several characteristics he brings to the papacy, Father Hehir predicted. Among them is his status as a Latin American, particularly one who lived through Argentina’s “dirty war,” which took place from 1976 to 1983, and the social and political upheavals experienced throughout the continent, he said.

And having “come of age” in the Vatican II era, being ordained in 1969, after the council ended, but having grown up in the pre-conciliar Catholic Church, also will shape Pope Francis’ approaches, he said.

Thus far, that has meant talking about the poor “as participants,” in improving their own situations, not merely as recipients of efforts on their behalf. Like Blessed John Paul II before him, but in stronger terms, Pope Francis also has hit upon inequality in the world, he said. This “is not surprising from a Latin American bishop,” said Father Hehir.

Like Blessed John Paul, Pope Francis recognizes that while globalization has its problems for social inequality, “it’s not going away,” and therefore needs direction, which the church can provide.

Father Hehir said the conference participants are of course well-versed in the church’s social teaching, and have at times, felt like they are at the far edge of the church’s work, as attention focused on other matters.

“With the leadership of this pope, you are now at the center of the church’s work,” Father Hehir said.

NEXT: Ukrainian Catholics pray, worry as unrest unfolds in homeland