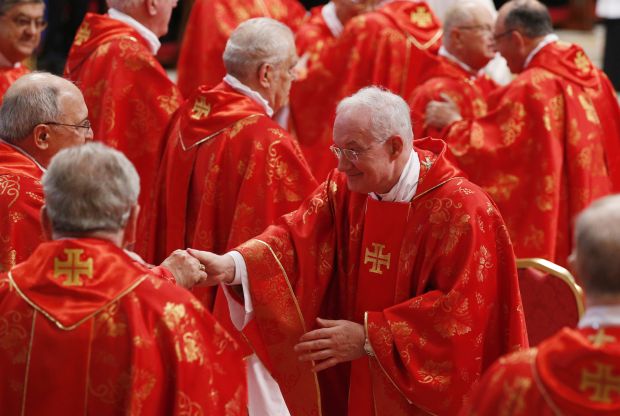 Canadian Cardinal Marc Ouellet, prefect of the Congregation for Bishops, exchanges a sign of peace with fellow cardinals during the Mass for the election of the Roman pontiff in St. Peter's Basilica at the Vatican March 12. Attending the service were some 170 cardinals, including 115 under 80 who were to enter the conclave in the Sistine Chapel that afternoon. (CNS photo/Paul Haring)

VATICAN CITY (CNS) — The tasseled felt hats of German horse riders and the brightly colored head wraps of women from the Antilles were just a few signs of the Catholic Church’s universality on display Feb. 22, as pilgrims celebrated the creation of new cardinals.

South Koreans and Canadians, Ivorians and Italians mingled as they celebrated their countrymen’s elevation to the College of Cardinals during a lively reception in the Vatican’s Paul VI hall.

“This is pure, unadulterated joy for me, to see my uncle made a cardinal,” said Rosemarie O’Mard, who left behind snow and ice storms in the New York borough of Queens to see Cardinal Kelvin Felix of Castries, St. Lucia, receive the red biretta.

“To me, he’s my Uncle Kelvin,” she told Catholic News Service, recalling how she grew up with the new cardinal because his father — her grandfather — raised her until she was 13, in an extended family where aunts and uncles were like mothers and fathers.

“You want him all to yourself, he’s so loving, he has that twinkle in his eye,” she said.

“But he’s not ours, he’s theirs, as he’s become a father to so many,” she said, pointing to a cheerful group of priests and laypeople gathered for photographs with the 81-year-old retired archbishop.

“For him, this is not a job. He loves these people, and look how amazing, how they love him back,” O’Mard said. Cardinal Felix is a true shepherd, she said, “and I think Pope Francis saw this in him, his strength and joy, how he lifts the rest of us up.”

Cardinal Felix said that although he was older than 80 and could never vote in a conclave, he was ready to serve the pope and the church.

“The role of the cardinal is not only to elect a pope,” he said, “there is much more to it than that. He is to assist the Holy Father in administering the whole church, all over the world. So the Holy Father can assign you any task that he feels he would like you to do for him.”

British Cardinal Vincent Nichols of Westminster said what struck him most about that morning’s ceremony in St. Peter’s Basilica, when the pope created 19 new cardinals from 15 different countries, “was the breadth of differences among the cardinals, reflecting the universality of the church.”

When retired Pope Benedict joined the ceremony in the basilica, offering each cardinal the opportunity to greet him, “it was very moving and a real surprise,” the 68-year-old English cardinal said.

Cardinal Chibly Langlois of Les Cayes, Haiti, said seeing the retired pope with Pope Francis on the feast of the Chair of St. Peter expressed “the unity of the church — that everyone is a servant in the church and is here to serve.”

The 55-year-old Haitian cardinal said his new role is a “call from God” to help the church, the people of Haiti and the pope, and “share with him his responsibility of pastor of the church.”

Philippine Cardinal Orlando Quevedo of Cotabato said he had “a great feeling of inadequacy” about becoming a cardinal. He said hearing the “old cardinals” speak at the two-day meeting the pope had called before the consistory made him think: “That’s the product of accumulated wisdom, pastoral experience and knowledge — what can I contribute?”

Cardinal Quevedo, 74, said he hoped he could offer the College of Cardinals lessons from his work with the poor, Christian “base communities,” indigenous peoples and Muslim dialogue partners.

Before going to the consistory, he said, he and Cardinal Luis Tagle of Manila celebrated Mass at the Pontifical Filipino College.

“I was overwhelmed with some feelings,” Cardinal Quevedo said, “and Cardinal Tagle made it worse, because he and I started crying on each other’s shoulders.”

Cardinal Gerald Lacroix of Quebec, 56, walked into the Vatican audience hall with his mother, Brigitte, on one side and his father, Raymond, on the other.

He said his bright red robes reflected something Pope Francis had said at the consistory, that following Jesus is not always comfortable, “it requires courage and it means taking up the cross — that’s about as red as it gets.”

Across St. Peter’s Square, thousands of pilgrims circulated through the frescoed halls of the Apostolic Palace as they greeted new cardinals who reside in Rome as senior officials at the Vatican.

One group of Germans, wearing tasseled felt hats, woolen jackets, riding pants and knee-high leather boots, stood for hours waiting to see their former bishop of Regensburg, Cardinal Gerhard Muller, now prefect of the Congregation for the Doctrine of the Faith.

Franz Grasse said about 30 riders came from southern region of Bavaria to pay their respects to a former fellow horseman.

Hundreds of men make an annual Pentecost pilgrimage on horseback from Bad Kotzting to a chapel four miles away and back, Grasse said. The future Cardinal Muller encouraged the custom for the decade he led the diocese and rode with the pilgrims every year.

PREVIOUS: Pope tells cardinals they are servants, not courtiers