Pope tells cardinals they are servants, not courtiers 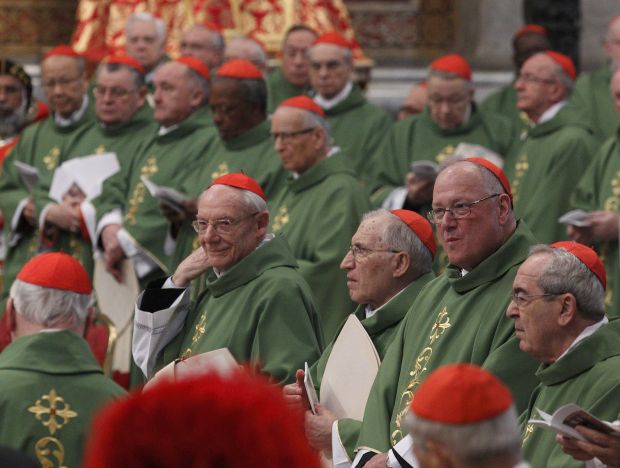 Cardinals attend Pope Francis' Mass for new cardinals in St. Peter's Basilica at the Vatican Feb. 23. Among those pictured are U.S. Cardinals Timothy M. Dolan of New York and Justin Rigali, retired archbishop of Philadelphia, both at right. The previous day, the pope created 19 new cardinals from 15 countries at a consistory attended by his predecessor, retired Pope Benedict XVI. (CNS photo/Paul Haring)

VATICAN CITY (CNS) — Celebrating Mass with the newest members of the College of the Cardinals one day after their elevation, Pope Francis urged them to regard their new role not as one of worldly honor but of humble service and sacrifice.

“A cardinal enters the church of Rome, not a royal court,” the pope said in his homily Feb. 23, during morning Mass in St. Peter’s Basilica. “May all of us avoid, and help others to avoid, habits and ways of acting typical of a court: intrigue, gossip, cliques, favoritism and preferences.”

“May our language be that of the Gospel: ‘yes when we mean yes; no when we mean no,'” he said. “May our attitudes be those of the beatitudes and our way be that of holiness.”

Pope Francis celebrated the Mass with 18 of the 19 men he had raised to the rank of cardinal the previous day in the same basilica. Cardinal Loris Capovilla, who at age 98 is now the oldest member of the college, was absent on both occasions for reasons of health.

The 18 new cardinals, clad in the green vestments of the liturgical season of ordinary time, sat in a near semicircle around the main altar. More than a hundred of their fellow cardinals, also serving as concelebrants, sat in rows at the front of the congregation. 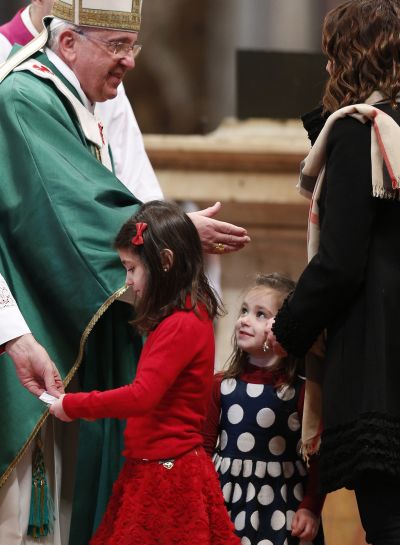 A young girl looks up at Pope Francis as he accepts offertory gifts during a Mass with new cardinals in St. Peter’s Basilica at the Vatican Feb. 23. The previous day, Pope Francis created 19 new cardinals from 15 countries at a consistory attended by his predecessor, retired Pope Benedict XVI. (CNS photo/Paul Haring)

Retired Pope Benedict, whose appearance at the previous day’s consistory had surprised practically all the participants, did not return to the basilica for the Mass.

Pope Francis’ call for humility echoed a letter he had sent the new cardinals shortly after the announcement of their elevation in January, telling them that a red hat “does not signify a promotion, an honor or a decoration; it is simply a form of service that requires expanding your vision and enlarging your heart,” and that they should celebrate their new distinction only in an “evangelical spirit of austerity, sobriety and poverty.”

In his homily, the pope said that “Jesus did not come to teach us good manners, how to behave well at the table. To do that, he would not have had to come down from heaven and die on the cross. Christ came to save us, to show us the way, the only way out of the quicksand of sin, and this is mercy.”

“To be saint is not a luxury,” he said. “It is necessary for the salvation of the world.”

Quoting from the day’s reading from the Gospel according to St. Matthew, in which Jesus enjoins his disciples to love their enemies and pray for their persecutors, the pope said cardinals are called to live out that injunction with even “greater zeal and ardor” than other Christians.

“We love, therefore, those who are hostile to us; we bless those who speak ill of us; we greet with a smile those who may not deserve it,” he said. “We do not aim to assert ourselves; we oppose arrogance with meekness; we forget the humiliations that we have endured.”

The pope’s words recalled his previous day’s talk to the cardinals — whose traditional scarlet garb is said to symbolize the blood of martyrs — when he called on them to pray for “all Christians suffering from discrimination and persecution” and “every man and woman suffering injustice on account of his or her religious convictions.”

Following the Mass, the pope appeared at the window of his office in the Apostolic Palace and addressed a crowd in St. Peter’s Square before praying the noon Angelus.

He said the weekend’s gathering of the world’s cardinals was a “precious occasion for experiencing the catholicity of the church, well represented by the varied origins of the members of the College of Cardinals, gathered in close communion around the successor of Peter. And may the Lord gives us the grace to work for the unity of the church.”