From tarps to steel roofs: Filipinos move to transitional shelters 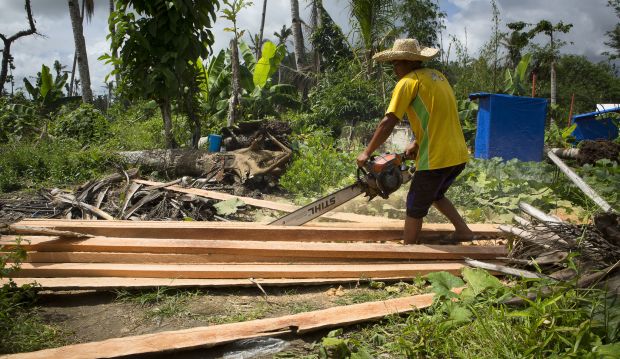 A man saws a coconut tree into construction beams Feb. 6 in Barangay Cabarasan Guti, a community in Tanauan, Philippines. Catholic Relief Services has hired experienced chainsaw operators from Mindanao in southern Philippines to cut coconut trees that were felled or sheared off by Typhoon Haiyanâs powerful winds. (CNS photo/Tyler Orsburn)

TANAUAN, Philippines (CNS) — Two-week-old Jesse Awa did not seem to mind the sound of loud hammering and saw blades cutting through wood as he slept peacefully, snuggled in his mother’s arms.

Just a few feet away, carpenters worked under a hot midday sun constructing a new home, albeit temporary, for his family.

His parents, Jeniffer and Maria Cecelia Awa, were excited though. In a couple of days they, Jesse and their three other school-age children would be able to move into a model transitional shelter, a far better alternative than their Typhoon Haiyan-ravaged home.

“I’m too much happy for my family,” Maria Cecelia Awa said.

“It’s a very helpful program because we can sleep well without any worries,” said Jeniffer Awa, a mechanic who works in nearby Tunauan.

The Awa family is the first in the community, known as Barangay Cabarasan Guti, who are preparing to move into a shelter being built from felled coconut trees in the poor rural community. The shelter is part of a burgeoning Catholic Relief Services typhoon recovery effort.

While not victims of the powerful storm surge because their community is nearly a mile from the Pacific Ocean shore, the Awas rode out the storm in their home as parts of it were peeled away by the fierce winds from the Nov. 8 storm. Currently, a tarp covers a portion of their tiny home made of wood, palm leaves and rusty corrugated steel.

“It was bad. It was an unforgettable moment,” Jeniffer Awa told Catholic News Service.

The shelters are being built as CRS transitions from emergency to recovery mode three months after the typhoon wrecked a large swath of the Visayas region of the central Philippines. In all, 25 families in Cabarasan Guti will be the beneficiaries of the transitional dwellings. Their homes were among the 551,000 lost or severely damaged in the storm.

The shelters are available in two sizes: 194 square feet for families with six or fewer members and 259 square feet for larger families. Once framed, a corrugated steel roof tops the structure before the walls are finished. The structures are built about three feet above ground level to prevent damage from potential flooding.

Some families in the community were living in donated tents or under large tarps carefully draped and tied over what was left of their homes.

The shelters are meant to be transitional and will last about three years, said Ruel Bansala, transitional shelter engineer with CRS, the U.S. bishops’ international relief and development agency. That’s more than enough time to allow a family to save resources to build a new home, he said.

Families are chosen based on various criteria. Barangay captains identify families in need and identify any special circumstances, such as an elderly or disabled member or newborn child. CRS staff members make the final decision on who will be part of the program. Under terms of the agreement, at least one family member must volunteer to help with construction in some way, even if they have no carpentry skills.

Near the Awas’ shelter, workers were building a larger structure for another family. Both buildings will serve as models for other families to visit and for other agencies to study.

Landowners also are brought into the process to assure that the dwelling occupants will be able to stay on the same property.

Materials costs are about $750. CRS hires local carpenters to build the shelters.

The shelter project also is helping the community in another way. CRS has hired experienced chainsaw operators from Mindanao in the southern Philippines to cut coconut trees that were felled or sheared off by Haiyan’s howling winds. Not far from the Awas’ home, a team of workers adeptly cut the timbers into the appropriate lengths and widths for use in the shelters.

The operators are training local men in the skill of lumber production as well.

Elizabeth Tromans, technical adviser for emergency preparedness and response for CRS, explained that hiring local operators gets money flowing in local economies, a must when a disaster has forced people out of work.

Bansala said CRS plans to build about 10,000 shelters throughout the Archdiocese of Palo in the next several months.

NEXT: Pope says relativistic ideas of marriage lead to divorce