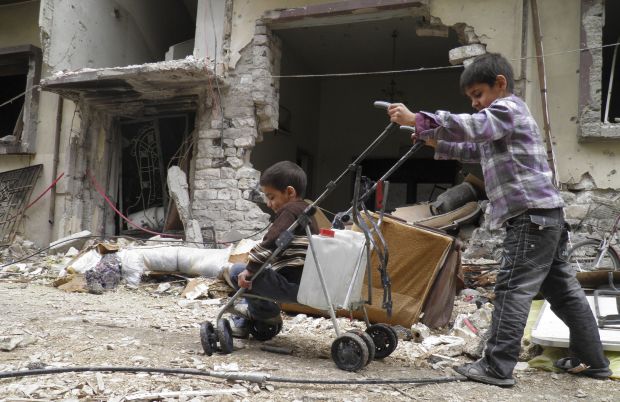 A boy pushes a stroller holding water and another child past destroyed buildings in the besieged area of Homs, Syria, Feb. 2. (CNS photo/Thaer Al Khalidiya, Reuters)

MAFRAQ, Jordan (CNS) — Syrians fleeing to neighboring Jordan from the besieged central city of Homs said some people there are starving to death for lack of food.

“People are dying of hunger especially, babies and young children,” said Um Mohamed, the mother of four children, who fled with her family to this northern Jordanian town in mid-2013 after her son was hit in the chest with shrapnel from an exploding bomb.

“There is no milk, no basics are available,” she said, citing phone conversations with family members stuck in Homs.

“It’s almost impossible to leave Homs,” said another former resident of Homs, Abu Ha’il, whose family of six made the long and perilous journey to Jordan in late January. “The city is surrounded. We risked our lives to get out.

“Government planes fly overhead and bombs are going off. There is torture, hunger. In some places there is food, but it’s not enough or there is simply no food at all,” he cited as the reasons why his family decided to risk their lives leaving.

“The international community is not able to deliver food or heating fuel in the dead of a very cold winter,” said the gaunt man, explaining that this has added immeasurably to the city’s woes.

The U.N.’s World Food Program has been demanding access to besieged areas in Syria but with only limited success. It said that it has reached about 3 million people with food aid inside the conflict-ridden country undergoing a civil war for almost three years.

But the organization believes there are still about a million more people who desperately need food, and among these are the residents of Homs.

The Syrian government said it reached an agreement with the United Nations Feb. 6 to evacuate hundreds of trapped civilians from besieged parts of Homs, according to its state-run TV. The Associated Press reported the evacuation began Feb. 7.

But a day earlier, a Dutch priest trapped in the siege on Homs’ Old City was cautious about the Syrian-U.N. agreement, preferring to see if it would be upheld and whether the proposed evacuation and delivery of aid would take place.

Jesuit Father Frans van der Lugt, who has served in Syria since 1966, told Catholic News Service Feb. 6: “There has been no food. People are hungry and waiting for help. No injured people have been allowed to leave.

“Families have been hoping to get out of the siege and out of the fighting between the two sides,” he told CNS by phone, through an interpreter.

Syrian Jesuit Father Ghassan Sahoui, who visited Beirut in early February, told CNS, “The cordon around the Old City (of Homs) has prevented badly needed foods and medicines from entering the area.”

Father Sahoui serves in a community about half a mile from Father van der Lugt. He said the loss of work due to the conflict added to hardships suffered by the Syrians.

“Stealing is taking place, sometimes because of hunger,” said Father Sahoui. “People are hungry, and they cannot buy food and heating fuel.”

For some, the little food available consists of bulgur and some olives, and people with access are making soup of bulgur and water. The priest said people eat a few olives as an alternative meal.

Father Sahoui said his Jesuit community is trying to help Syrians by distributing some food and helping to pay rent for people in Homs.

“We receive everybody, Muslims as well as Christians. Muslims from any background, Sunni and Alawite,” he said.

“We are trying to help them to live together and to live in reconciliation,” Father Sahoui said.

The news of the proposed truce between the government and rebels to provide aid to Homs could not come soon enough for Um Sahige, a woman who fled Homs with her immediate family to Jordan late last year.

“We’ve spoken with our families by phone. I got the worrying news that my brother-in-law has fainted from this lack of nourishment. He is so weak now that he cannot move,” she said.

NEXT: From tarps to steel roofs: Filipinos move to transitional shelters