In unusual video, pope speaks of his longing for Christian unity 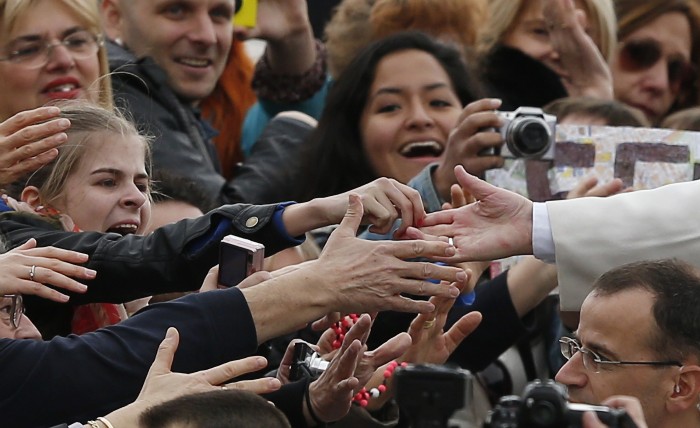 VATICAN CITY (CNS) — In an unusual video message, recorded on an iPhone by a Pentecostal pastor Pope Francis knew in Argentina, the pope says all Christians share blame for their divisions, speaks of his “longing” for their unity and insists that God will bring the miracle of Christian unity to completion.

(Watch the full video below.)

“Pray to the Lord that he will unite us all,” the pope tells a group of Pentecostals meeting in the United States. “Let’s move forward, we are brothers; let us give each other that spiritual embrace and allow the Lord to complete the work he has begun. Because this is a miracle; the miracle of unity has begun.”

In the video, posted on YouTube and never released by the Vatican, the pope quotes a character from a novel by Alessandro Manzoni; the character says, “‘I have never found that the Lord began a miracle without finishing it well.’ He will finish well this miracle of unity,” the pope added.

The Vatican did not release any details when it announced Jan. 14 that Pope Francis had met with “Anthony Palmer, bishop and international ecumenical officer for the Communion of Evangelical Episcopal Churches,” a group that is not affiliated with the Anglican Communion.

The video, which Palmer said he took with his iPhone, begins in English with the pope apologizing that he will have to switch to Italian, although mostly, he said, he would speak from the heart, which is “a more simple, more authentic language.”

Addressing Palmer as “my brother, a bishop-brother” and saying they had “been friends for years,” the pope offered what he said were greetings “both joyful and full of longing” to participants in a forthcoming meeting of the Kenneth Copeland Ministries, a Pentecostal group that sponsors large prayer gatherings around the world.

The joy, the pope said, comes from knowing that “the Lord is working all over the whole world.”

But he said he is full of longing because Christians are still separated, “separated because of sin, our sins.”

“Who is at fault?” he asked. “All of us are, we are all sinners. There is only one who is just and that is the Lord.”

Pope Francis said he longs for the day when “this separation would end and there would be communion.”

“Let’s allow our longing to increase so that it propels us to find each other, embrace each other and to praise Jesus Christ as the only Lord of history,” the pope said.

The video begins with Palmer telling a Pentecostal gathering about the importance of Christian unity for preaching salvation in Christ to the world.

Palmer said that the Catholic-Protestant divisions have had no reason to exist since the 1999 Catholic-Lutheran Joint Declaration on the Doctrine of Justification. The agreement recognized that “by grace alone, in faith in Christ’s saving work and not because of any merit on our part, we are accepted by God and receive the Holy Spirit, who renews our hearts while equipping and calling us to good works.”

“Brothers and sisters, Luther’s protest is over,” Palmer told his audience. “Is yours?”

“We are not protesting the doctrine of salvation (taught) by the Catholic Church anymore,” he said. “We now preach the same Gospel.”

The Catholic Church has celebrated the agreement on justification and other ecumenical agreements, while insisting that further progress must be made to resolve other differences before there is full unity and sacramental sharing. Those differences include how different Christians view the sacraments and how they see the role of the papacy.

NEXT: Pope: By taking care of elders, families show world all life has value