Pope: By taking care of elders, families show world all life has value 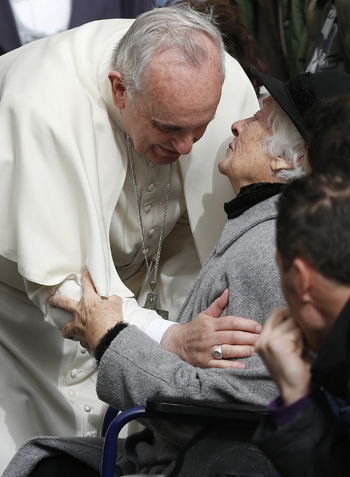 Pope Francis greets an elderly woman in a wheelchair during his general audience in St. Peter’s Square at the Vatican Feb. 19. (CNS photo/Paul Haring)

VATICAN CITY (CNS) — Pope Francis said the worst thing about growing old is not becoming weaker or infirm, but the “abandonment, the exclusion, the deprivation of love” in today’s “throwaway culture.”

The pope’s remarks came in a written message sent to bioethicists, scientists, healthcare professionals, religious, theologians and other experts attending the Pontifical Academy for Life’s Feb. 20-21 workshop on “Aging and Disability.”

The pope thanked the academy for its “often tiring work, because it demands going against the tide” in a world facing the “tyrannical domination of an economic logic that excludes and sometimes kills.”

“We have created a ‘throwaway’ culture” that is no longer about exploitation or oppression, but about treating people as “the outcasts, the ‘leftovers,'” he wrote, citing his apostolic exhortation, “Evangelii Gaudium” (“The Joy of the Gospel”).

The elderly are particularly affected by this trend of exclusion, especially if they are ill, disabled or vulnerable in other ways, he wrote.

People forget that human relationships “are always relationships of reciprocal dependence” in which the degree of dependence changes over the course of a person’s life, especially at its early and later stages and during periods of illness or suffering.

“The loss of health and having a disability are never a good reason for exclusion or, worse, eliminating a person,” he wrote in the message.

The best place to learn the real value of human life and the duty of solidarity is the family, he wrote.

“In the family you can learn that the loss of health is not a reason to discriminate against some human lives; the family teaches not to succumb to individualism and to strike a balance between the ‘I’ and the ‘we.'”

It’s in the family that people learn that taking care of others is “a foundation of human existence,” the pope wrote. How families treat and care for their elders “becomes critical in order to reconfirm before all of society the importance of older people” and the active role they should play in the community.

Though older people may seem to “take without anything to give,” he wrote, their experience “warns us not to foolishly repeat our past mistakes.”

Pope Francis noted the academy was celebrating 20 years since Blessed John Paul II established it to promote the dignity of life and study current challenges to life in the fields of medicine and law.

The academy’s work is meant to “let people of goodwill know that science and technology, when put at the service of the human person and his or her fundamental rights, contribute to the integral wellbeing of the person,” Pope Francis said.

PREVIOUS: In unusual video, pope speaks of his longing for Christian unity

NEXT: Pope calls for ‘intelligent, courageous, loving’ approach to families