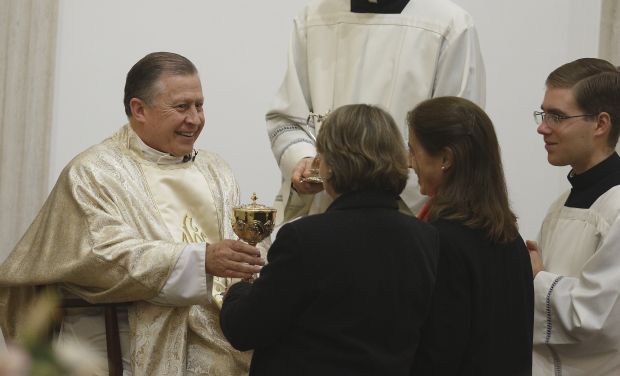 ROME (CNS) — Representatives of the Legionaries of Christ, meeting to reform their troubled congregation nearly four years after it was effectively taken over by the Vatican, announced a new slate of leaders and formally apologized to victims of their disgraced founder.

The statement by the congregation’s extraordinary general chapter, released Feb. 6, expressed “deep sorrow” for the late Father Marcial Maciel Degollado’s “reprehensible and objectively immoral behavior,” including “abuse of minor seminarians,” “immoral acts with adult men and women,” “arbitrary use of his authority and of material goods,” “indiscriminate consumption of addictive medicines” and plagiarism.

Saying they were “grieved” it had taken so long to apologize to Father Maciel’s “many victims,” the members of the chapter acknowledged a “long institutional silence” in response to accusations against him, and offered a progress report on efforts to overcome the founder’s demoralizing legacy.

The gathering of 61 Legionary priests from 11 countries, which opened Jan. 8 and is expected to last until the end of February, is the culmination of a reform process that began with a Vatican-ordered apostolic visitation in 2009. That investigation was prompted by revelations Father Maciel, who died in 2008, had fathered at least one illegitimate child and sexually abused minors.

In 2010, the Vatican announced that Father Maciel had been guilty of “seriously and objectively immoral behavior” and “real crimes,” and had lived a “life devoid of scruples and of genuine religious meaning.” That same year, Pope Benedict XVI named Cardinal Velasio De Paolis to supervise the Legionaries’ reform. 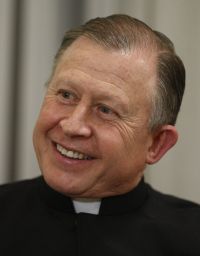 Mexican Father Eduardo Robles Gil, the new general director of the Legionaries of Christ, is pictured during an interview at the order’s Center for Higher Studies in Rome Feb. 6. (CNS photo/Paul Haring)

The Legionaries announced Feb. 6 that the chapter had elected Mexican Father Eduardo Robles Gil Orvananos to serve as the congregation’s general director. Father Robles Gil was to succeed German Father Sylvester Heereman, who has served as the congregation’s vicar general and then acting general director since February 2012. Father Heereman will now serve as general councilor, one of four other posts filled in the election. Two other officials, including the new vicar general, Spanish Father Juan Jose Arrieta, were named directly by the Holy See.

In 2012, Cardinal De Paolis invited Father Maciel’s immediate successor as general director, Father Alvaro Corcuera, to step down for the sake of his health.

The chapter members said Father Maciel had been treated with “excessive exaltation” by his followers, but that, since the 2006 abolition of a private vow forbidding the criticism of superiors, Legionaries had been learning to “freely debate” how their congregation is governed.

The statement also said Legionaries had exhibited certain “personal and institutional behaviors that were not proper to religious life,” including “insufficient collaboration with the local church, excessive emphasis on the role of personal effort and merely human effectiveness, striving after prestige, and an indiscriminate fulfilling of minute norms.”

“All of this demands of us not only a change in legislative texts, but also a continual conversion of mind and heart,” the statement said.

Before it adjourns at the end of February, the chapter is supposed to approve a revised constitution, which has not yet been released to the press.

In their statement, chapter members expressed a desire to maintain “friendship and fraternal dialogue” with former Legionaries. According to Father Benjamin Clariond, a spokesman for the order, 84 priests and at least 439 seminarians have left since 2010. He said the congregation now counts four bishops and 954 priests among its members, and is preparing 836 adult seminarians for ordination.

Chapter members also noted that some branches of the congregation had been burdened with increasing debt in recent years, owing in part to a “fall-off in donations.”

Despite their troubles, the Legionaries remain influential at the Vatican, among other ways through Rome’s Pontifical Regina Apostolorum University, which they run.

In November, Pope Francis, who must approve the Legionaries’ new constitution before it takes effect, ordained Bishop Fernando Vergez, a member of the congregation, three months after naming him to the second-highest post in the office governing Vatican City.

NEXT: Syrians fleeing to Jordan say Homs residents starving from lack of food