Mass, even with the pope, isn’t a tourist activity; it’s God’s time 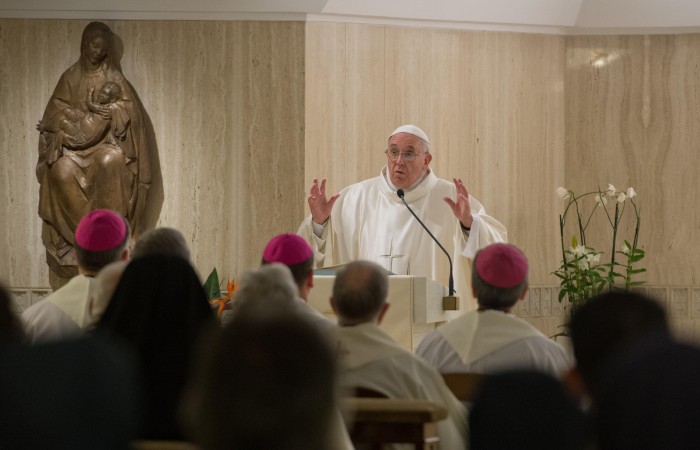 VATICAN CITY (CNS) — An invitation to attend Pope Francis’ early morning Mass is a hot ticket in Rome, but the pope said the Mass — in his residence or anywhere else — isn’t an event, but a time for entering into the mystery of God.

“Maybe someone would say, ‘Oh, I must get to Mass at Sanctae Marthae because the pope’s morning Mass is on the Rome tourist itinerary,'” he said, according to a report by Vatican Radio.

Addressing those gathered for the Mass Feb. 10, he said, “All of you come here, all of us gather here to enter into a mystery, which is the liturgy. It is God’s time, it is God’s space, it is God’s cloud that envelops us all.”

Throughout history, God has spoken to his people in different ways: through prophets, priests and the Scriptures, the pope said. But the Bible also tells of special moments, “theophanies,” when God is present in a more direct way.

The Mass is one of those occasions when the Lord is present, Pope Francis said. The Mass isn’t a social occasion or even “a prayer meeting. It’s something else. In the liturgy, God is present.”

Pope Francis said that when Catholics construct a Nativity scene, pray the rosary or participate in the Stations of the Cross, they are remembering historical events, which helps them to pray.

But the Mass is something different, it’s not a re-enactment of the Last Supper, he said. “It is the Last Supper. It is living again the passion and redeeming death of the Lord. It is a theophany: the Lord is present on the altar to be offered to the Father for the salvation of the world.”

The pope said it’s not right for people to look at their watches during Mass — “we must put ourselves there, in God’s time and space, without looking at our watches.”

NEXT: Philippine program brings boats to fishermen, jobs to carpenters