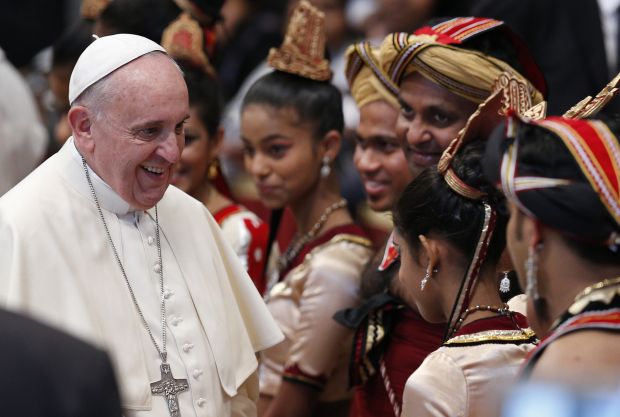 Pope Francis greets Sri Lankan dancers after a Mass for Sri Lankan pilgrims in St. Peter's Basilica at the Vatican Feb. 8. The pope arrived after Mass and greeted an estimated 12,000 Sri Lankans living in Italy who were in attendance. (CNS photo/Paul Haring)

VATICAN CITY (CNS) — When civil strife, conflict and bloodshed have pitted people of different ethnic groups against one another, reconciliation is particularly difficult, but it’s still the only way to ensure a better future for all, Pope Francis told a large group of Sri Lankan pilgrims.

“It is not easy, I know, to heal the wounds and cooperate with yesterday’s enemy to build tomorrow together, but it is the only path that gives hope for the future,” the pope said Feb. 8 during a meeting with an estimated 12,000 Sri Lankan pilgrims.

From 1983 to 2009, Sri Lanka was involved in a bloody internal conflict. Rebels from the Liberation Tigers of Tamil Elam carried out a violent campaign seeking autonomy for the Tamil majority in areas north and east of Sri Lanka. Sinhalese make up the majority of the country’s 20 million inhabitants.

Pope Francis joined the pilgrims in St. Peter’s Basilica after Cardinal Albert Malcolm Ranjith of Colombo celebrated Mass. The cardinal invited Pope Francis to visit Sri Lanka, to which the pope responded, “I welcome this invitation and believe the Lord will give me the grace to do so.”

Cardinal Ranjith had told the pope that the more fortunate among the pilgrims work as housekeepers, caregivers or factory workers in Italy. The others, he said, have part-time jobs or no work at all; “many live in harsh and difficult conditions.”

Pope Francis asked the pilgrims, who were marking the 75th anniversary of the consecration of their country to Mary, to share with him some of their songs. The Tamil- and Sinhalese-language choirs and dancers were happy to comply. 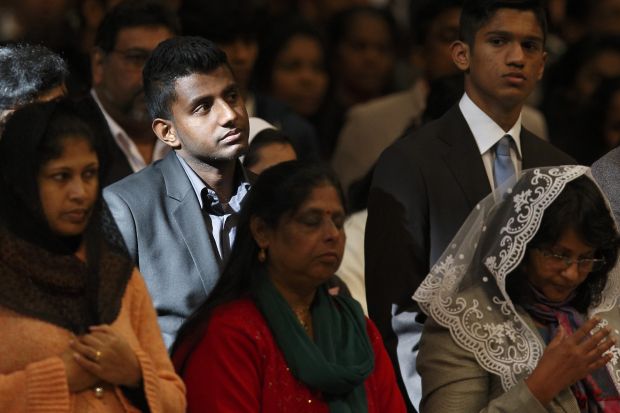 NEXT: Mass, even with the pope, isn’t a tourist activity; it’s God’s time