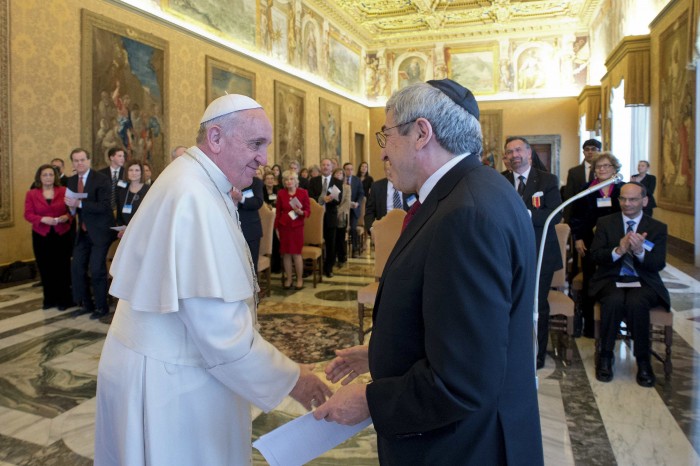 Pope Francis greets Stanley Bergman, president of the American Jewish Committee, during a meeting at the Vatican Feb. 13. (CNS photo/L'Osservatore Romano via Reuters)

VATICAN CITY (CNS) — Pope Francis asked leaders of the American Jewish Committee to pray for his May trip to Jerusalem, “so that this pilgrimage may bring forth the fruits of communion, hope and peace.”

The modern relationship between Jews and Catholics, he said Feb. 13, has a “theological foundation” and is “not simply an expression of our desire for reciprocal respect and esteem.”

Pope Francis noted that in 2015, the Catholic Church will mark the 50th anniversary of “Nostra Aetate,” the Second Vatican Council’s declaration on relations with other religions. The document, the pope said, is “the sure point of reference for relations with our ‘elder brothers.'”

The declaration said Christians and Jews share a common heritage and a profound spiritual bond and denounced any form of contempt of the Jews. It also explicitly taught that responsibility for Jesus’ death “cannot be charged against all the Jews, without distinction, then alive, nor against the Jews of today.”

Pope Francis told the American Jewish Committee delegation that while the Catholic-Jewish exploration of theological themes must continue, the two communities also must find ways to work together to construct “a more just and fraternal world,” especially through service to the poor, the marginalized and the suffering.

In addition, he said, “it is important that we dedicate ourselves to transmitting to new generations the heritage of our mutual knowledge, esteem and friendship,” especially in seminaries and education programs for lay Catholics. “I am similarly hopeful that a desire for an understanding of Christianity may grow among young rabbis and the Jewish community.”

Stanley Bergman, president of the committee, thanked the pope for his commitment to improving Jewish-Catholic relations and told him, “We come here feeling deeply that you are our true friend, and we feel that we are yours.”

The Jewish delegation also met with Cardinal Kurt Koch, president of the Pontifical Commission for Religious Relations With the Jews, and with Cardinal-designate Pietro Parolin, Vatican secretary of state.

Rabbi David Rosen, the committee’s international director of interreligious relations, told reporters that the talks with the secretary of state focused on promoting religious freedom, education and cooperation in charitable activities. When asked, he said that neither the committee members nor the Vatican officials brought up the sainthood cause of Pope Pius XII, a figure of controversy because of what he did or did not do during World War II to help save Jews.

As for Pope Francis’ May trip to the Holy Land, the Israel-based Rabbi Rosen said he wished plans called for the pope to be in Israel for more than 30 hours, but he was sure Pope Francis would “do everything that has to be done.”

“Everybody is so excited — whether Jordanians, Palestinians and Israelis — that no matter how short his visit is, it’s a guaranteed success,” the rabbi said. “Hopefully it will leave behind it a sense of greater hope for the future. That’s what we need in the Middle East.”

Addressing questions about the possibility of a Catholic-Jewish theological dialogue, Rabbi Rosen said both Blessed John Paul II and retired Pope Benedict XVI had noted that Christians cannot understand Christianity without knowing something about Judaism. He said Cardinal Koch described that situation as being like “a child who does not know his mother.”

While “it’s true that Judaism does not have to understand Christianity in order to understand itself,” he said, “that doesn’t mean that we shouldn’t.”

Rabbi Rosen said he believes that in the relationship between Jews and Christians, “God is speaking to us and, therefore, it’s our moral obligation to ask what this relationship means.”

NEXT: Pope: Catholic educators must share Gospel with multicultural society