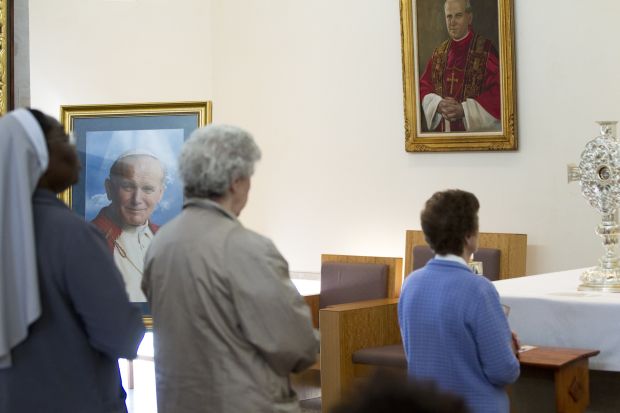 People pray in front of a relic of Blessed Pope John Paul II Sept. 30 in the chapel of the Washington shrine dedicated to the late Polish pontiff. (CNS photo/Tyler Orsburn)

VATICAN CITY (CNS) — The sainthood process is long and technically complicated, and ultimately requires the approval of the pope, but the whole procedure is driven by Catholics in the pews and, especially, those on their knees.

The Congregation for Saints’ Causes and the official promoters of causes — known as postulators — do the paperwork, but if there is no evidence of widespread devotion to a candidate, no visits to the person’s grave, no reports of favors and even miracles received through the potential saint’s intercession, the cause just sits there. Even for centuries.

Jesuit Father Marc Lindeijer, assistant postulator of sainthood causes for his order, says he has no problem waiting.

On the contrary, as far as the Dutch priest is concerned, the more time passes, the more certain the church can be of the lasting importance of a candidate’s witness.

“I think the process has to be long and complicated,” he said. The solemn declaration that a specific person is in heaven with God and is worthy of global Catholic devotion “has to be treated with care.”

“It’s not as if the Vatican is asking for a canonization, it’s the people,” he said. Nothing happens without grass-roots pressure at the start.

That helps explain why members of religious orders occupy most of the places on the church’s calendar of saints, and why lay saints are so few.

“One could say a religious order is a mightier lobby for a cause,” encouraging its members and the people they serve to pray to the habited holy one and report back any favors received, Father Lindeijer said.

Generally for canonization, the church requires a demonstration that the popular devotion to a candidate has extended over a long period of time. Canonization, Father Lindeijer said, “is not a stamp of approval” for how someone lived his or her life, but is a way for the church to hold that person up as an example for today’s Catholics and the Catholics of tomorrow

For example, the Diocese of Macerata, Italy, recently concluded the preliminary phase of the cause of its native son Jesuit Father Matteo Ricci, the 16th-century missionary to China. The cause also has received strong support from Chinese bishops, Father Lindeijer said.

However, he worries that outside of Macerata and China, Father Ricci is admired for his scholarship and culturally sensitive approach to missionary work, but not necessarily venerated as holy. To promote his cause successfully, Father Lindeijer will need to answer the question: “Are people praying to Matteo Ricci?”

“Massive popular devotion” is even more important than verified miracles in deciding whether or not to canonize someone, Father Lindeijer said. When “the cult is clear and many people receive many graces praying to them,” the pope can waive the requirement of a miracle attributed to the candidate’s intercession.

For instance, Pope Francis will canonize Blessed John XXIII April 27 even though there is no papal decree recognizing a specific miracle; he is expected to do the same later this year with Blessed Jose Anchieta, a late 16th-century missionary to Brazil, and Blesseds Marie de l’Incarnation and Francois de Laval, who were missionaries in Canada in the 1600s.

Father Lindeijer said he considers setting aside the miracle requirement a less serious exception than shortening the waiting period after a candidate’s death.

The 1917 Code of Canon Law stipulated that a sainthood cause could not open until 50 years after the candidate’s death. Pope John Paul shortened the period to five years, but set even that aside for Mother Teresa of Kolkata. A month after Pope John Paul’s death, Pope Benedict XVI announced he had set aside the waiting period for his predecessor’s cause.

“Fame comes and goes, and fame of sanctity, as Pope Benedict rightly said, is something that should be growing,” he said. “When that phenomenon can be proven, it shows that the Holy Spirit is at work.”