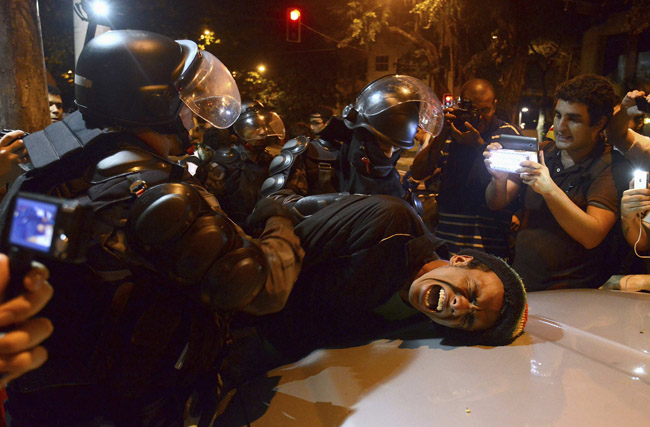 A demonstrator is detained by riot police during a protest against Rio de Janeiro governor Sergio Cabral Filho, near his residence in Rio de Janeiro in early July 2013. Construction of facilities in Brazil for the 2014 FIFA World Cup and the 2016 Olympics was in full swing last year when a wave of street protests swept through the country. (CNS photo/Lucas Landau, Reuters)

LIMA, Peru (CNS) — Construction of facilities in Brazil for 2014 FIFA World Cup and the 2016 Olympic Games was in full swing last year when a wave of street protests swept through the country.

“We want a soccer association-style hospital,” read one demonstrator’s sign, a reference to the quality of the local government health center compared to the new structures going up for the sporting event.

That sentiment is symptomatic of a deeper discontent taking shape around Latin America as a decade-long economic boom slows down and voters in about half the region’s countries prepare to elect their presidents this year.

In countries newly emerged from the ranks of the poor — where a burgeoning middle class is buying new cars and running up credit-card debt as shopping malls and high-rise apartment buildings alter the urban skylines — the seven heads of state elected in 2014 will wrestle with many of the challenges that Pope Francis has warned about over the past year.

Looming largest on the list are “inequalities and inclusion of all members of society,” said Roxana Barrantes, an economics professor at the Pontifical Catholic University of Peru who also heads the Institute of Peruvian Studies, a social sciences think tank in Lima.

“In many countries in Latin America, people are openly questioning the high degree of inequality in income distribution and in opportunities for people who (traditionally) have been excluded, particularly original peoples,” Barrantes said.

By 2012, the proportion of Latin American people living in poverty had dropped to 28 percent. That still means 164 million people — a figure roughly equal to half the U.S. population — still live on the bare minimum needed to survive.

Recent years of economic upheaval in the United States and Europe brought boom times to Latin America, as financial investment in the region rose and countries profited from high international prices for commodities such as minerals and oil.

The bonanza galvanized domestic economies and lifted many people above the poverty line for the first time in decades. The region’s poverty rate has been cut almost in half since 1990, when 48 percent of Latin Americans were poor, and almost half of those lived in extreme poverty.

By 2012, the proportion living in poverty had dropped to 28 percent, according to the U.N. Economic Commission for Latin America and the Caribbean. That still means, however, that 164 million people — a figure roughly equal to half the U.S. population — still live on the bare minimum needed to survive.

The benefits of the economic boom have varied from country to country — nearly half of all Salvadorans still live in poverty, compared to 7 percent of Uruguayans — and within countries, where poverty rates and the lack of job and educational opportunities are highest in rural areas and among indigenous people.

Perhaps most telling are the figures for income inequality. Nearly half the region’s income goes to the wealthiest 20 percent of the population, while the poorest 20 percent receive only 5 percent.

Pope Francis had that in mind when he told political and business leaders at January’s World Economic Forum in Davos, Switzerland, “The successes which have been achieved, even if they have reduced poverty for a great number of people, often have led to a widespread social exclusion.”

He had already warned about the serious consequences of those disparities.

“Until exclusion and inequality in society and between peoples are reversed, it will be impossible to eliminate violence,” the pope wrote in his first apostolic exhortation, Evangelii Gaudium, or “The Joy of the Gospel.” (Buy the book here.)

“Just as the commandment ‘Thou shalt not kill’ sets a clear limit in order to safeguard the value of human life, today we also have to say ‘thou shalt not’ to an economy of exclusion and inequality,” he wrote. 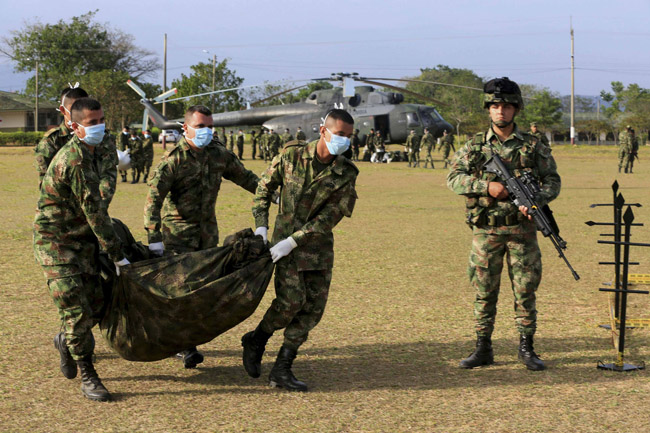 Colombian soldiers carry the bodies of Revolutionary Armed Forces of Colombia rebels killed in combat at an army base in Tame. Colombian President Juan Manuel Santos is staking his hopes for re-election later this year on peace talks aimed at defusing violence in that country and allowing the countrys largest guerrilla group to participate in politics. (CNS photo/Jose Miguel Gomez, Reuters)

The pope’s combined reference to inequality and killing also reflects the trend in his native Latin America. Fears about security are near the top of the list of concerns for voters in many Latin American countries, where homicide rates have increased even as poverty levels have dropped.

Five of the region’s countries — El Salvador, Colombia, Venezuela, Guatemala and Brazil — have the world’s highest youth homicide rates, according to the World Health Organization.

In some countries, particularly those where illegal drugs are produced or shipped, drug trafficking and other organized crime drive up crime rates. In Honduras, which has one of the world’s highest homicide rates, Juan Orlando Hernandez won the presidency in November after campaigning on a law-and-order platform.

In Colombia, President Juan Manuel Santos is staking his hopes for re-election later this year on peace talks aimed at defusing violence in that country and allowing the country’s largest guerrilla group to participate in politics.

“Minimum standards for peace” should include “life, access to health, education, housing and jobs,” Cardinal Ruben Salazar Gomez of Bogota said during a recent assembly of Colombia’s bishops.

For the guerrillas, that means “these are rights that cannot be violated,” Cardinal Salazar said. “And the government must understand that it has the obligation to promote those rights.”

In a sense, that is the balancing act that presidents elected this year in Panama, Costa Rica, El Salvador, Brazil, Bolivia and Uruguay also will face, as voters clamor for a greater share of the wealth, just as the region’s economic growth appears to be slowing down.

In Brazil, where President Dilma Rousseff’s re-election bid is challenged by Marina Silva, a former rubber tapper and a domestic servant who rose to become the country’s environment minister, trouble is brewing again.

In January, four months before the start of the World Cup, demonstrators burned buses to protest fare increases — the same issue that touched off the protests a year ago.

The demonstrations are a reminder of the challenges still facing Latin American leaders despite the region’s newfound prosperity.

Said Barrantes of Peru’s Catholic University, “They will have to combine giving confidence to investors with an effective redistribution (of wealth), so that the majority of people are included in the fruits of economic growth.”