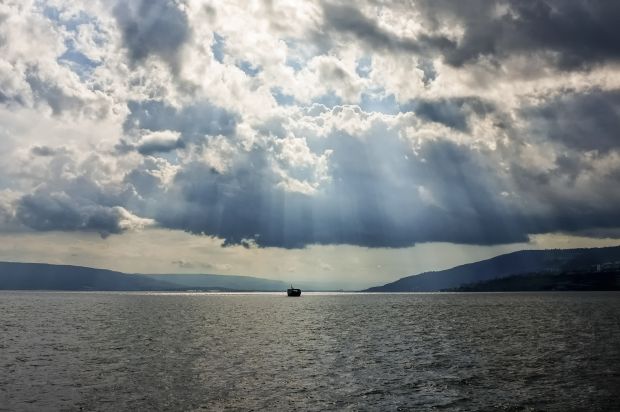 Rays of sunlight stream from the clouds as a fishing boat makes its way on the Sea of Galilee. (CNS photo/Bob Mullen)

NAZARETH, Israel (CNS) –- Driving along the main road from Nazareth toward the Sea of Galilee, a green oasis of farmland and fields greets the traveler.

The road passes fertile fields and homesteads interspersed with meadows, forests and springs. It’s a scene largely unchanged — save for the modern invention of cell phone towers and electrical lines — for centuries.

But it’s not hard to imagine that the scenes differ little from what Jesus saw as he made his way to the region where he spent most of his public life ministering to the poor, sick and forgotten, and began gaining the attention of the Roman rulers.

Located northeast of Nazareth, Galilee offers a peek at an Israel that is far removed from the conflict between Israelis and Palestinians. Life is less hectic in Galilee, and tourists will find the relaxing atmosphere a welcome alternative to the noisy, bustling environment of the Old City of Jerusalem. It is in Galilee where many of the Gospel narratives are centered and the stories of Jesus’ miracles come to life.

The road from Nazareth into Galilee passes through the Arab town of Kafr Kanna, or Cana, where many believe Jesus performed his first miracle turning water into wine. The main street through town passes small businesses and a few restaurants that offer tasty meals at low cost.

A short walk off the street through a crowded but quiet neighborhood is the Catholic Church of the Wedding Feast overseen by the Franciscans. The small ornate church features a large mural above the main altar depicting Jesus instructing the wedding staff about what to do with the cisterns full of water. The wooden altar itself is intricately carved with grape vines.

Venturing deeper into Galilee, pilgrims will get their first glimpse of the Sea of Galilee as a broad vista of the fertile valley unfolds below. The region is peppered with ancient ruins of Jewish synagogues and long-lost villages that continue to yield significant archaeological finds, leading to new understanding about life in the region extending back several millennia. 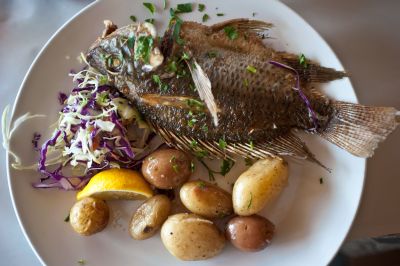 A simple meal of fish and potatoes is served up at a restaurant on the shore of the Sea of Galilee. (CNS photo/Bob Mullen)

The road eventually reaches the edge of the Sea of Galilee, which was teeming at one time with scores of Jewish settlements. Traveling northward along the seafront road, visitors will pass several kibbutzim, part of a movement established in the early 20th century to promote collectivism and Zionism. Originally the kibbutz were agriculturally based, but have evolved over the decades into commercial ventures encompassing various industries to take advantage of tourism and modern technology.

One, Kibbutz Ginosar, is home to a fishing boat that was discovered in 1986 buried under layers of mud on the edge of the sea. Carbon dating placed the small boat in the time of Christ. Its remnants — known as the “Jesus boat” — are on display in a small museum that uses video technology to tell the story of its discovery and preservation.

Further north is the town of Tabgha, site of the Church of the Multiplication of Loaves and Fishes. It is on this site where Jesus asked God to bless the food gathered from the throng of people who were following him so that all would be fed. It is the only miracle described in all four Gospels.

The church, built in 1982, has a simple stone altar over a rock outcropping in the floor where Jesus prayed over the fish and bread. A simple mosaic in front of the altar depicts a basket of bread flanked by fish.

Nearby is the Mount of Beatitudes, where Jesus gave his sermon on the mount, advising the crowds of followers on how to live life through respect and care of others. The grassy hill where Jesus offered the Eight Beatitudes is located on the northwest edge of the Sea of Galilee, with views toward Tabgha and Capernaum, the home of St. Peter.

Today the amphitheater-like setting is commemorated by flower-filled gardens and the black-domed Church of the Beatitudes, built in 1937 with funds from the Italian government. The simply decorated and brightly lit church offers a quiet setting to contemplate the meaning of the beatitudes in daily life.

Returning down the hill and following the road seaside road to the north, the Holy Land pilgrim comes to the town of Capernaum, where Jesus settled and chose the first four apostles from among the fishermen merchants. The town’s ruins, including a fourth-century synagogue built over the synagogue where Jesus is believed to have preached and the home of St. Peter, hints at what life might have been like in an out-of-the-way place in first-century Israel.

Back in Nazareth, Holy Land visitors can experience a mix of the old and the new. It is the city where the angel Gabriel told Mary she would conceive a son by the power of the Holy Spirit and where Jesus spent much of his life.

The old town is inhabited by Muslim and Christian Palestinians and is where the Church of the Annunciation is located. Jewish residents inhabit Nazareth Illit to the north. Founded in 1957, it was developed as part of plan for Jewish colonists to inhabit all of Galilee.

Many ancient and historic Christian churches are located in the old town. The most notable is the Basilica of the Annunciation, consecrated in 1969 after a years-long construction project. It is the most recent in a line of Crusader and Byzantine churches built on the site of Mary’s home; it enshrines the cave where the Annunciation is believed to have occurred. Overseen by the Franciscans, the church retained parts of those former churches in its design.

The basilica actually consists of a lower church and an upper church. The lower church is where Mass is usually celebrated. The upper church, with its numerous paintings and sculptures by artists from around the world, is reserved for use on special occasions and religious holidays.

The Church of St. Gabriel nearby is the Orthodox counterpart to the basilica. Orthodox tradition holds that Mary learned she would bear the son of God while getting water for her family and it is at a site known as Mary’s Well that the church is built.

The upper church houses ornate wooden carvings and painted icons. Pilgrims can descend to the lower chapel of the spring from the north aisle of the church. It is from here that the spring — Mary’s Well — that runs beneath the altar can be seen.

PREVIOUS: Capernaum, ‘the town of Jesus,’ offers a glimpse of Christ’s ministry

NEXT: Gospel Trail puts visitors on the path of Christ through Galilee