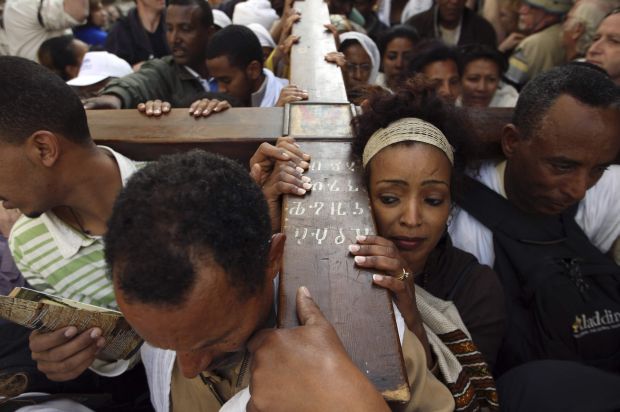 Christian pilgrims carry a cross to the Church of the Holy Sepulcher along the Via Dolorosa -- the Way of Sorrows -- in Jerusalem's Old City. (CNS photo/Reuters)

JERUSALEM (CNS) – A stack of thin wooden crosses grows by the hour near the entrance of the Coptic Monastery of St. Anthony, indicating the number of pilgrims marking the final steps of Christ before his crucifixion.

Nearby, a part of the shaft of a Roman column marks the site of Jesus’ third fall — the ninth station.

The crosses mark the end of the outdoor portion of the Via Dolorosa — the Way of Sorrows — which traverses the Christian and Muslim quarters of Jerusalem’s Old City and, which tradition holds, marks the path Christ followed from condemnation through death.

The 10th through 14th stations are commemorated inside the Church of the Holy Sepulcher, which adjoins St. Anthony’s. But it’s at the sites marking the first nine stations where devoted Christian pilgrims can be seen praying, reflecting and recalling the arduous journey of Christ on his way to Golgotha, now within the boundaries of the Old City.

The Via Dolorosa has more to do with tradition than the actual path Jesus took through ancient Jerusalem as he was prodded and pushed along by Roman soldiers charged with carrying out his death sentence. The Via Dolorosa as it exists today was established in the 18th century and closely follows an ancient Byzantine devotional route. The actual path Jesus followed is lost to history.

Modern-day life being carried out along much of the Via Dolorosa can be distracting to visitors making a spiritual pilgrimage, however. The hawking of shop owners, loudspeakers announcing the Muslim call to prayer, the boisterous chatter of boys chasing each other at play, the fragrant smell of burning incense and the local traffic are challenges with which to contend.

Such scenes offer a glimpse of the realities of daily life that has probably changed little over the centuries and can help make the Via Dolorosa all the more enthralling.

The Via Dolorosa has been remade numerous times since early Christianity. It has been shaped by the construction of churches and hospices that commemorate a particular stage in Christ’s final hours. Just as significant in the path’s repeated reconfigurations over the centuries has been the political leadership — Jewish, Byzantine and Ottoman — as the boundaries of the Old City itself changed again and again.

Whatever its form, devout Christians have followed some type of path marking the death of Jesus since Constantine legalized Christianity in the fourth century.

The nearly half-mile-long Via Dolorosa begins in the Muslim Quarter near Lions’ Gate (also known as St. Stephen’s Gate), one of seven gates in the walls surrounding the Old City that were built by the Ottoman Turks in the 16th century. The path connects the fortress Antonia, where Christ was judged by Pontius Pilate, and Calvary. Most stations are marked by a simple marker, sign or round shield inscribed with a Roman numeral.

Today, a complex known as the Church of the Flagellation marks the beginning of the Via Dolorosa, and the first and second stations in particular (Mk. 15:6-20). The site includes the Franciscan Monastery of the Flagellation — known for its intricate stained-glass windows depicting Pilate washing his hands, Christ’s scourging at the pillar and the freeing of Barabbas (Mt. 27: 15-26) — and the Church of the Condemnation and Imposition of the Cross.

Nearby is the Ecce Homo Arch, which spans the Via Dolorosa. It is what remains of a second-century Roman structure built to celebrate the capture of Jerusalem. Christian tradition holds that it was on this site that Pilate presented Jesus to the crowds, saying “Ecce homo,” Latin for “Behold the man.” (Jn. 19:5)

Further afoot, Via Dolorosa turns to the left at the intersection with Al Wad Road, and it is at this corner where the third station commemorating Christ’s first fall is located. A small chapel belonging to the Armenian Catholic Patriarchate with a marble relief above the door marks the event. Visitors are welcome.

Much of the remaining path along the Via Dolorosa is crowded with shopkeepers, small restaurants and souvenir stands selling religious goods. Chapels — two Catholic, two Orthodox — mark the fifth through eighth stations. At the fifth station (Lk. 23:26), the Via Dolorosa turns westward and narrows as it passes through markets and covered streets. In the rain, the well-worn stone streets can be slippery, so caution is advised.

The route between the eighth (Lk. 23:27-31) and ninth stations is confusing with several twists and turns along streets that at times are no more than four feet wide.

A climb up 28 stone steps marks the final approach to the station and the nearby entrance to the Coptic monastery, which provides a not-often used access to the Church of the Holy Sepulcher.

PREVIOUS: Church of the Holy Sepulcher stands at the center of Christianity

NEXT: Capernaum, ‘the town of Jesus,’ offers a glimpse of Christ’s ministry