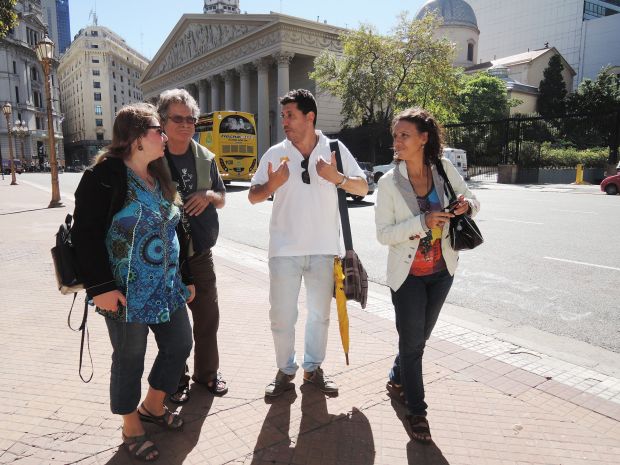 Javier Cortese, center, leads tours sponsored by the Buenos Aires municipal government on sites important or notable during the life of Pope Francis. The tours take in the city's cathedral with its neo-classical facade. (CNS photo/David Agren)

BUENOS AIRES, Argentina (CNS) — Pope Francis used to pick up La Nacion newspaper every day at a kiosk across from the city’s cathedral. Each edition was bound by a rubber band. But then-Cardinal Jorge Bergoglio, being frugal, would save the rubber bands and return them in a ball at the end of every month.

Guide Javier Cortese offered the anecdote while leading tours around central Buenos Aires, where the local government and private companies alike have capitalized on the popularity of Pope Francis. Tour guides now take tourists to the most notable and mundane points — from his neighborhood parish to the newspaper stand — visited by the pope during his life in Buenos Aires.

Cortese said the tours are nothing out of the ordinary, given the excitement in Buenos Aires over Pope Francis’ unexpected election. The idea for the tours “was hatched the same day” of the March 2013 election, he said.

The Buenos Aires government was quick to embrace Pope Francis’ election; it investigated his past and put plaques at places like his childhood home.

Despite the early excitement, the tours in Buenos Aires may be running their course and, at some places, bring more bother than benefits.

The local government’s tours stay away from the newspaper stand, for example. Guides describe it from across the street, even though it made worldwide headlines after Pope Francis phoned to cancel his subscription.

When approached after a tour, Daniel del Regno, the son of the owner, expressed exasperation at the attention and refused to allow photos to be taken of the business made famous by the pope.

“It’s been a stampede of people,” he said of the attention.

One year after the pope’s election, the people keep coming, albeit in smaller numbers. The Buenos Aires municipal government’s tourist office said it took 321 people on its twice-weekly walking tours in 2013, with the biggest number being recorded in May, right after the initiative was unveiled.

One of the 90-minute tours covers the city center and the other in the Barrio Flores, where Pope Francis grew up. The local government also provides a three-hour Saturday excursion to both areas with free transportation. Instructions for unaccompanied tours are also provided; all tours are free of charge.

Private operators jumped in the game, too, with some tours costing more than $100, lasting the day and taking in additional sights, such as the San Lorenzo soccer club installations, since Pope Francis is a fan.

But most tours start with the neoclassical cathedral where Pope Francis used to celebrate Mass; now it is almost as much a tourist attraction as a place of worship. Tourists with translation headsets snapped pictures in the many chapels on a recent Sunday as Mass was being celebrated in the main sanctuary.

The cathedral anchors one end of the plaza the Plaza de Mayo, and the president’s residence, the Casa Rosada (Pink House), the other. The cathedral sits next to the archdiocesan offices, in which Pope Francis famously lived in a one-room apartment.

The plaza, an axis for all things political, fills with protesters ranging from the mothers of the missing in the country’s 1976-83 “dirty war” to disgruntled workers seeking higher salaries to veterans of the 1982 Falklands’ War.

The tours meander to other sites in the city center, including St. Francis of Assisi Basilica and St. Ignatius of Loyola Parish, where Pope Francis used to hear confessions.

In his tours, Cortese shares small anecdotes. At St. Ignatius Parish, he pointed to an image of Mary, Untier (Undoer) of Knots, to whom Pope Francis developed a devotion to while studying in Germany.

On a less Christian-subject, Cortese mentioned that the final four digits of the pope’s membership number in San Lorenzo — the team is owned by members — were drawn in the national lottery on the day of his election. Another lottery game produced No. 88, the number associated with the Buenos Aires cardinal — on the night of the election.

Cortese told the lottery anecdote from a street near the Peluqueria Romano, where the pope used to get his haircut. One of the barbers played down the publicity, however.

“We were already the No. 1 barbershop in Buenos Aires,” said barber Roberto Chiachero, who recalls shaking the pope’s hand on many occasions.

“Everybody’s been here,” the church secretary said after being asked about the tours.

Pope Francis’ childhood home, now a rebuilt, two-story abode with shuttered windows at Membrillar 531, attracts the curious, but does not stand out in any significant way.

If neighbors are tired of the attention, they keep the comments private. The church secretary said they were “happy” so many people were showing up, but noted, “The tours have nothing to do with us.”