Use Lent to shed apathy to sin, poverty, indifference to God, pope says 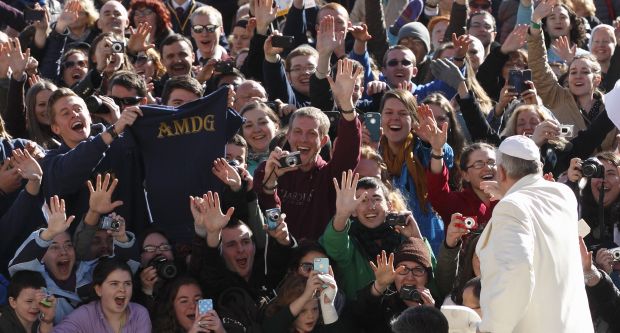 Students from the Gaming, Austria, campus of Franciscan University of Steubenville, Ohio, cheer as Pope Francis arrives to lead his general audience in St. Peter's Square at the Vatican March 5. (CNS photo/Paul Haring)

VATICAN CITY (CNS) — Lent is a time to shed lazy, un-Christian habits and snap out of one’s apathy toward people harmed by violence, poverty and not having God in their lives, Pope Francis said.

Lent is time to “change course, to recover the ability to respond to the reality of evil that always challenges us,” he said during his weekly general audience March 5, Ash Wednesday.

The pope’s catechesis focused on the meaning of Lent, which, beginning Ash Wednesday for Latin-rite Catholics, marks a 40-day period of penance, prayer and conversion “in preparation for the church’s annual celebration of the saving mysteries of Christ’s passion, death and resurrection,” he said.

Later in the evening, Pope Francis was scheduled to lead a traditional Ash Wednesday procession from Rome’s Basilica of St. Anselm to the Basilica of Santa Sabina for Mass and the imposition of ashes.

At his morning audience, he explained that Lent is a time for “a turnaround,” to convert and change for the better.

“All of us need to improve,” he said, and “Lent helps us. And that way we get out of our tired routine and the lazy addiction to evil that tempts us.”

Lent calls people to live more fully their Baptism, which brings new life, he said. “It invites us to not get used to the situations of degradation and misery that we encounter as we walk along the streets of our cities and towns.

“There’s the risk of passively accepting certain behaviors and to not be astonished by the sad situations around us,” he said. “We get used to violence, as if it were everyday news taken for granted; we get used to our brothers and sisters who sleep on the streets, who don’t have a roof over their heads. We get used to refugees seeking freedom and dignity who aren’t welcomed as they should be.”

People also get too used to living in a culture or society that pretends it can do without God, and where parents, grandparents and adults no longer teach children how to pray, he said.

He asked that people “think about it and answer in your heart.”

Christians need to overcome their indifference, “this addiction to un-Christian and easy-way-out behaviors that drug our hearts,” he said.

Lent is a time to reflect on and be awed by what Christ did for our salvation and to prepare “our mind and our heart for an attitude of gratitude toward God, for all he has given us,” the pope said, because “when we see this love that God has for us, we feel the urge to get closer to him and this is conversion.”

Summing up, the pope said the “essential elements for living the Lenten season are: giving God thanks for the mystery of his crucified love; authentic faith; conversion; and opening our heart to our brothers and sisters.”