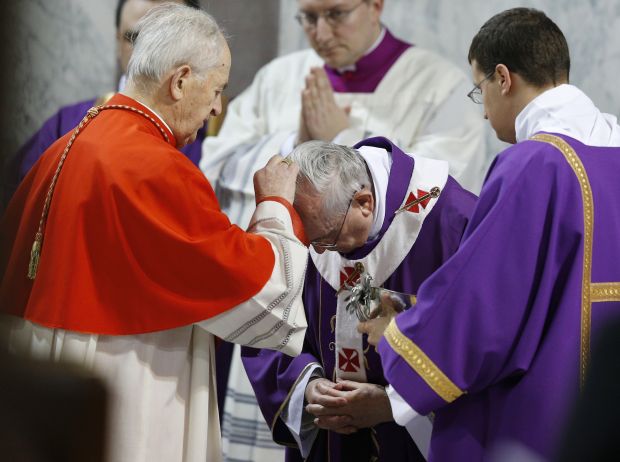 ROME (CNS) — Lent is meant to wake up Christians and help them see that God can give them the strength to change their lives and their surroundings, Pope Francis said.

Before receiving and distributing ashes at an evening Mass March 5, Ash Wednesday, Pope Francis gave a homily focused on a line from the prophet Joel: “Rend your hearts, not your garments.”

The prophet, he said at the Mass at Rome’s Basilica of Santa Sabina, “reminds us that conversion can’t be reduced to exterior forms or vague resolutions, but involves and transforms one’s entire existence, starting with the center of the person, the conscience.”

The Mass began after a penitential procession from the nearby monastery of St. Anselm. To a chanted litany of saints, the pope walked behind Benedictines from St. Anselm, Dominicans from Santa Sabina and cardinals who work in the Vatican.

Conversion starts with recognizing that “we are creatures, that we are not God,” the pope said in his homily at Mass. Too many people today, he said, think they have power and “play at being God the creator.”

During Lent, he said, Christians are called to use the three elements the Gospel recommends for spiritual growth: prayer, fasting and almsgiving.

“In the face of so many wounds that hurt us and could lead to a hardness of heart, we are called to dive into the sea of prayer, which is the sea of the boundless love of God, in order to experience his tenderness,” the pope said.

With more regular and intense prayer during Lent, he said, Christians are called to think of the needs of others, “interceding before God for the many situations of poverty and suffering” in the world.

As for fasting, Pope Francis said the point isn’t just to follow the rules for Lenten fasting and abstinence, because that could lead to self-satisfaction.

“Fasting makes sense if it really chips away at our security and, as a consequence, benefits someone else, if it helps us cultivate the style of the good Samaritan, who bent down to his brother in need and took care of him,” he said.

Fasting, he said, should “exercise the heart” to recognize what is absolutely essential and to teach one how to share with others. “It is a sign of becoming aware of and taking responsibility for injustice and oppression, especially of the poor and the least, and is a sign of the trust we place in God and his providence.”

Almsgiving is a practice that should be common among all Christians, but especially during Lent, he said. Christians give concrete help and attention to those in need — asking nothing in return — because they recognize how much God has given them even though they were not deserving.

Almsgiving also helps free people from “the obsession of possession, from the fear of losing what they have and from the sadness of not sharing their well-being with others,” the pope said.

“Lent comes providentially to reawaken us, to shake us from our lethargy,” the pope said.

The need for conversion is clear, he said. “There is something not right with us, with our society, with the church and we need to change, to turn, to convert!”

The call of the prophets to turn back to God, he said, “reminds us that it is possible to realize something new within ourselves and around us simply because God is faithful, he continues to be rich in goodness and mercy, and he is always reading to forgive us and start all over.”