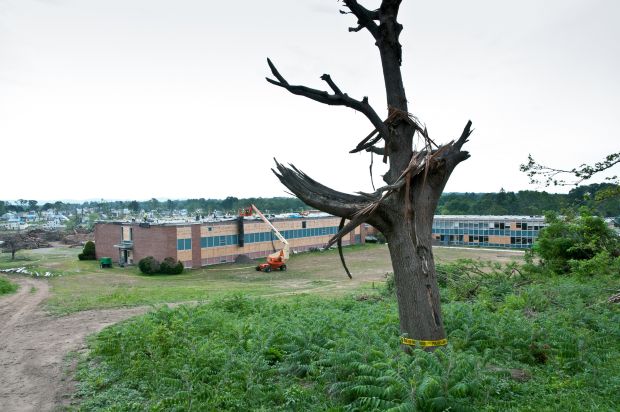 Springfield Bishop Timothy A. McDonnell said the grant will allow for the demolition of Cathedral High School, St. Michael’s Academy Middle School and St. Michael Academy Preschool to make way for the reconstruction.

The federal funds will supplement about $40 million in insurance coverage that the diocese received in the fall.

The grant covers about 75 percent of the unfunded costs to replace the schools as determined by FEMA officials. The funds can be used for construction as well as school furnishings.

The June 1, 2011 tornado ravaged the campus on the outskirts of Springfield.

Diocesan officials were uncertain that the school would reopen after the storm, particularly in light of declining enrollment in recent decades.

In announcing receipt of the grant at a March 3 news conference, Bishop McDonnell thanked the Cathedral High School community and other supporters for their patience in undertaking the effort to secure the funding. He said it has been “a long haul” since the tornado.

“It’s taken patience and persistence to reach this happy occasion,” he said.

The grant also covers the cost of removal of hazardous materials and site preparation.

In addition, FEMA will provide funding through a series of smaller grants totaling $9 million to cover expenses related to contents and equipment, site safety, security work and temporary facilities that the schools will need until the new facilities are completed.

Rep. Richard Neal, D-Mass., Springfield Mayor Domenic Sarno and Paul Ford, FEMA’s acting regional administrator, all of whom worked with the diocese to broker the agreement, were on hand for the announcement.

Bishop McDonnell and Neal said building an endowment for tuition assistance for future Cathedral students remained the largest challenge facing the school. After the insurance settlement was reached in the fall, Bishop McDonnell challenged Cathedral alumni to pledge an amount equal to one year of Cathedral tuition, $9,300, to establish a $10 million endowment.

Since the tornado, students have been attending classes in the former Memorial School in nearby Wilbraham. The diocese’s lease for the facility runs through June 2015.