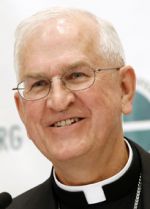 WASHINGTON (CNS) — U.S. Catholics stand in solidarity with the people of Ukraine as their country struggles with political tensions, said a statement from the president of the U.S. Conference of Catholic Bishops.

Archbishop Joseph E. Kurtz of Louisville, Ky., said in the March 4 statement that the U.S. bishops, “together with tens of millions of U.S. Catholics of Eastern European descent join Pope Francis in solidarity and prayers for the people of Ukraine for an end to the current tensions and troubling events which continue to unfold there.”

He lauded the heroic witness of Ukrainian Greek and Latin Catholic leaders “who stand firm for human rights and democracy,” which gives hope that peaceful means to rebuild civil society may prevail.

Archbishop Kurtz noted that Catholics in Ukraine have a history of being persecuted, and pleaded for religious liberty to be protected there. He asked U.S. Catholic communities gathered for the Ash Wednesday services to pray for a peaceful resolution of the crisis, “one that secures the just and fundamental human rights of a long-suffering, oppressed people.”

NEXT: Crisis in Ukraine ‘replay’ of what led up to World War II, says priest