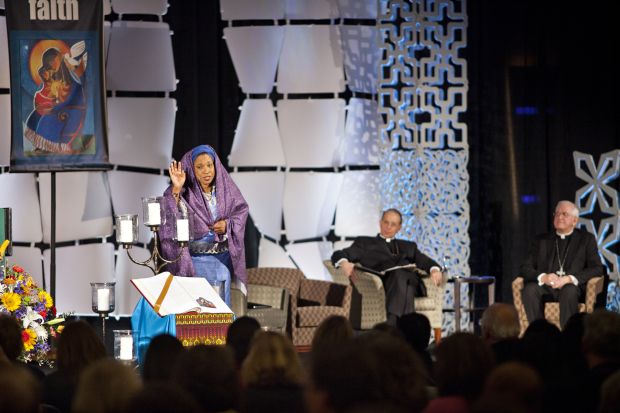 BALTIMORE (CNS) — What Dawn Sirface has learned at the Mid-Atlantic Congress for Pastoral Leaders enriches her ministry as the parish formation coordinator at St. Ann in Hagerstown.

“It’s a great experience to go and talk to a lot of different people,” said Sirface, who is working on a master’s of theology at the Ecumenical Institute of Theology at St. Mary’s Seminary and University in Roland Park. “It’s a cornucopia of different materials, different talks and leadership presenting styles.”

Sirface was among the hundreds who gathered at the Hilton Baltimore for the third annual Mid-Atlantic Congress, held Feb. 27 to March 1.

Designed to strengthen pastoral ministers from parishes, schools and representatives from more than 60 dioceses, it offers a variety of classes and breakout sessions featuring more than 75 speakers. This year’s theme was “Forming Catholic Leaders for Faith-filled Service.”

The congress, co-sponsored by the Archdiocese of Baltimore and the Association of Catholic Publishers, in partnership with the National Leadership Roundtable for Church Management, works to rejuvenate zeal for ministry and cultivate leadership knowledge and skills.

It was the second year at the congress for Sirface, one of eight students from the Ecumenical Institute of Theology at St. Mary’s Seminary and University who are earning credit there through a course offered in conjunction with the congress.

Founded in 1968, the Ecumenical Institute offers fully accredited master’s level courses and degrees to men and women of all faith traditions.

“It (the congress) gets me thinking and doing things that apply to my field,” said Sirface, 52. “There’s a lot of theoretical stuff; this is practical. I know that when I come back home I have to follow up on one or two of the things I heard there. It forces me to put one or two of these things into action.”

Ben Maerzke, who is working on a master’s of moral theology at St. Mary’s, was one of the Ecumenical Institute students at the congress. It was the first year he was attending it.

“Today inspired me to try new things,” Maerzke, 27, a parishioner of Our Lady of the Fields in Millersville and a youth minister at seven parishes in the archdiocese, said Feb. 28.

“To look around and see leaders from the parishes that I work with, that they’re also here hearing the same things, it’s a sense of we’re all on the same team, we’re all working for the same goals,” he told The Catholic Review, Baltimore’s archdiocesan newspaper.

Among the offerings Maerzke attended was “Practical Ecumenism,” a breakout session sponsored by the U.S. Archdiocese for the Military Services and presented by Paulist Father Tom Ryan, from the Paulist Office for Ecumenical and Interfaith Relations.

“He had a lot of practical advice for working with other denominations and other faiths and ways of sharing the faith,” Maerzke said. “I really liked some of his ideas about working with some of the Protestant churches around where I work. That’s something that I’m eager to take back to my job.”

During the leadership assembly Feb. 27, Baltimore Archbishop William E. Lori impressed upon the hundreds of participants, which included lay ecclesial ministers, priests and religious sisters, the importance of their ministry.

“It’s worth it for us to place ourselves before Jesus for he is the one who fills us with joy and encouragement to go forward,” Archbishop Lori said.

Archbishop Joseph E. Kurtz of Louisville, Ky., president of the U.S. Conference of Catholic Bishops, focused on evangelization during his keynote address.

“The new evangelization is about saying something,” said Archbishop Kurtz, who called Pope Francis a “great evangelizer.”

He outlined the five tasks of today’s catechists: praying, observing, reaching out, gathering and sending forth.

“It is not what is said, but rather what is heard and received that is the core of the new evangelization,” Archbishop Kurtz said. “Faith, like a flame, it grows stronger the more it is shared. Together, let us go forth to share the good news of Jesus Christ. That’s what a good catechist does.”

The congress provides “a nurturing experience for people who come” and they return to their parishes with “a sense of renewal,” said Paulist Father John Hurley, co-chairman of the congress and director of the Archdiocese of Baltimore’s Department of Evangelization.

Lowe is a reporter for The Catholic Review, newspaper of the Baltimore Archdiocese.

NEXT: Archbishop asks for Ash Wednesday prayers for Ukraine