Bahrain cathedral will be ‘symbol of Christianity’ in ‘heart of Islam’ 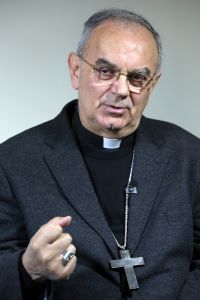 WASHINGTON (CNS) — Bishop Camillo Ballin, apostolic vicar of Northern Arabia, knows full well what it is like to minister to Catholics in a Muslim region because he has been doing that for more than four decades.

In recent years, the 69-year-old Italian bishop — a member of the Comboni Missionaries of the Heart of Jesus who has served in Egypt, Sudan, Lebanon, Kuwait and now Bahrain — has seen the number of Catholics particularly in the Persian Gulf rise sharply. He attributes the increase to the growing number of workers migrating to the oil-rich nations for manual labor and domestic service work.

In his territory, the Northern Arabia vicariate — which includes Kuwait, Bahrain, Qatar and Saudi Arabia — there are more than 2.5 million Catholics.

In response, he is preparing to build a new cathedral in Awali, Bahrain, called Our Lady of Arabia, which will hold 2,600 congregants. The current church on the island nation seats about 700. The Catholic population in Bahrain numbers about 140,000, the bishop said.

King Hamad bin Isa Al Khalifa of Bahrain donated more than two acres to the bishop last year to build the cathedral complex, including the cathedral, a bishop’s residence, 16 multipurpose halls, residential accommodations for visiting clergy and a training center for catechists. Construction is set to begin in October and the new cathedral should open in 2016.

The bishop spoke to Catholic News Service March 13 during a U.S. visit to collect “cement” as he described it, or financial backing for the cathedral, which he said will be the “symbol of Christianity in the “heart of Islam.” To date, the local Catholic community has contributed $3 million to the project, but the cost for the cathedral alone is $30 million, which is why the vicariate is working with Aid to the Church in Need, an international Catholic charity, to help raise needed funds.

Bishop Ballin pointed out that beyond the church structure itself being a symbol of Christianity, there will be no exterior symbols, such as crosses on the cathedral or church property.

“We are in an Islamic country. The religion of this country is Islam and we have to respect laws of the country,” he said. “For us, it is not essential to have crosses outside the church. What is essential for us is for Christians to witness the love of God.”

He continued: “It is better not to provoke negative reactions from local people. It is better to work together for peace. External signs can be useful but they are not essential.”

The bishop noted that inside the cathedral crosses or other religious symbols can be displayed. In Bahrain, he said, Catholics have “total freedom to worship in the confines of the church” without government or police interference but they cannot worship in public for example with outdoor processions.

The bishop politely refused to discuss the situation in Saudi Arabia — linked by bridge to Bahrain — saying only that observance of faith there “is another situation for Christians; this is not a secret.”

A report issued by the Aid to the Church in Need notes that Christians are not free to worship or publicly display their faith in Saudi Arabia, which is why many Catholics worship secretly in homes or embassies.

Bishop Ballin, who said he openly wears his cassock and pectoral cross in public and has “always been respected,” stressed that Catholics who worship in his vicariate “don’t want to convert anybody or provoke conversion.”

He noted that he has been ministering in Arab countries for 45 years and “never had one conversion; never expected a conversion.”

“Our mission is not to convert,” he said, but to “do good to everybody” including those of different religions or no religion.

He also pointed out that he has more than enough challenges within his own extremely diverse congregation which includes five rites and Masses celebrated in 13 languages.

“My biggest challenge is to form one Catholic Church” from this diverse group, he said.

The majority of local Catholics are from India, Philippines, Sri Lanka, Bangladesh and Korea, he said. They are all young, he added, noting that when they are 60 years old, they have to leave the country.

“Our church is a young church,” he said, and the parishioners have many activities and initiatives. They want to meet, get together and have spiritual formation. Many of them left their families behind for these jobs and are alone.

For its part, he said the church tries to “help them form communities, find new friends, to have a better human life.”

Bishop Ballin considers himself a local, since he has a passport from Bahrain and only gets back to his Italian homeland about once a year. He described the church in the Persian Gulf as a living church.

He noted that in some regions where you “have to push people to come to participate” he said, almost jokingly, that priests in his vicariate refrain from encouraging participation because there just wouldn’t be enough room if everyone came.

He noted that about 30 to 35 percent of the faithful in these Arab countries attend Sunday Masses, which is a much bigger percentage than in some European countries where less than 5 percent of Catholics attend Mass. He also is convinced more Catholics would attend Masses here but cannot because of their work schedules.