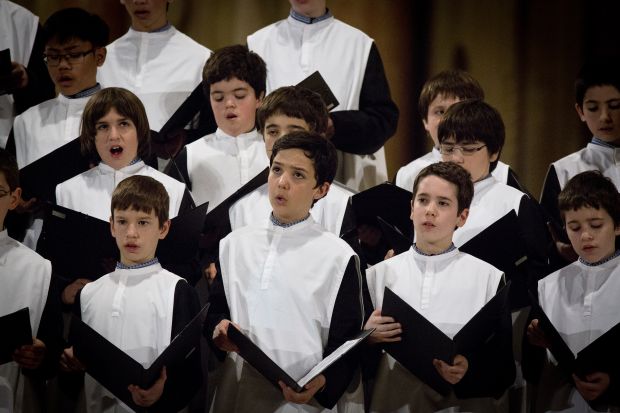 Members of the Escolania de Montserrat, one of the oldest and most venerable boys' choirs in Europe, perform at the Basilica of the National Shrine of the Immaculate Conception in Washington March 15. (CNS photo/Tyler Orsburn)

It took them 800 years, but they have finally arrived in the United States to share their ministry of sacred music.

“Sacred music is important to us, because a monk knows that when he is in the liturgy he is in the presence of God,” said Benedictine Brother Efrem de Montella, deputy headmaster of the Escolania.

The choir sang liturgical music — some of it dating back to the Middle Ages — in New York, Summit, N.J., and Bethesda, Md. On March 15, the congregation at the Basilica of the National Shrine of the Immaculate Conception in Washington were also treated to two songs after Mass.

The sacred music performed by the choir demands a lot of dedication. The boys leave their homes between the ages of 9 and 14 and spend four or five years at Montserrat. They practice for an hour and 10 minutes a day and sing daily in the church. In addition to singing, the boys play piano and at least one other instrument.

When asked if a chorister’s schedule was tiring, Pablo Morales, 12, said that it could be. However, he thought that element was of minor significance.

“The important thing is not to think about oneself,” Pablo said in an interview at the national shrine. “For the choristers it’s just another day like any day, but for the pilgrims that have come to Montserrat it’s a special day. It’s not so much about us, and how we feel — it’s about what we can give to the visitors of Montserrat.”

The boys’ responsibility to the pilgrims is part of the reason why they have toured less extensively than other choirs. The Benedictine abbey on the side of the mountain draws travelers from all over the world. For centuries, the Escolania sang only for their visitors. In 1968, the choir began to leave the monastery to sing.

On tour, audiences listen to selections outside of the Escolania’s normal repertoire.

“We get to share a little bit of who we are too, and to share the Catalan culture,” said 13-year-old chorister Marc Garcia. Their performance at the Strathmore in Bethesda included music composed for Our Lady of Montserrat as well as opera and Catalan folk songs.

The group has enjoyed performing in the United States. “It’s not the last time we will come, we hope,” said Brother Efrem.

Americans who appreciate the beauty of this unique and ancient tradition hope that they will come again, too.

PREVIOUS: Bahrain cathedral will be ‘symbol of Christianity’ in ‘heart of Islam’