Bill would continue programs that help inmates with life after prison 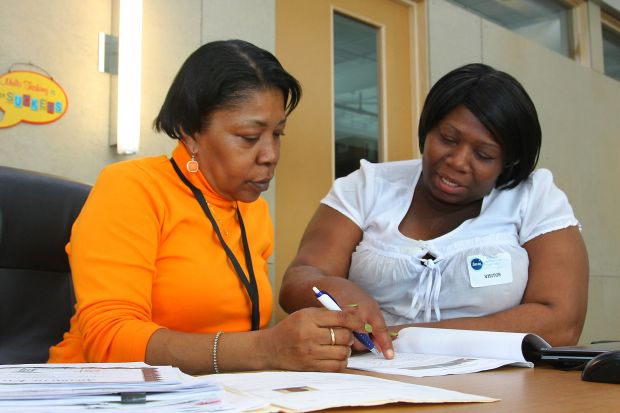 WASHINGTON (CNS) — Clevelander Alease Fleming is no stranger to prison.

Having served three sentences totaling six years plus for theft, robbery and burglary by the time she was 34, she got to know what life is like on the inside and harbored plenty of anger at the world on the outside.

But it was sometime during her last prison term — three years for burglary, a crime committed to support a nasty crack habit — that Fleming began to consider her future. Watching women who were in their 60s and 70s across the prison pod, Fleming thought she did not want to be like them.

“I was looking at them and thinking, ‘I don’t want my grandbabies to see me in prison,'” she told Catholic News Service.

A flier introducing a case management program posted on the wall of the Northeast Pre-Release Center in Cleveland, where inmates are sent a few months before their sentences are finished, convinced Fleming it was time to seek the assistance she needed to stabilize her life and escape the drugs-crime-prison cycle.

Fleming credited the program and case manager Cheryl Walcott with helping reintegrate her into the community after years of being on the streets that saw her live revolve around drugs and prostitution.

Under the program, Walcott guides Fleming through several goals she set for herself while still in prison. Fleming, like most other people leaving prison, had little more than a bag of clothes from which to start rebuilding her life. The program helped Fleming find and furnish an apartment, buy clothing, obtain food and gave her bus tickets to attend GED classes at Cuyahoga Community College.

Today, Fleming is a mentor for women at the Pre-Release Center. She is an example to other women that the traumatic experiences of life that often lead to substance abuse and crime can be overcome through dedication and hard work.

Fleming’s good fortune can be traced to the funds provided to Community Re-Entry under the Second Chance Act. The law provides funding to local programs assisting people leaving prison to reintegrate into society. Community Re-Entry’s case management program is funded by a grant of nearly $300,000 administered through the Cuyahoga County Reentry Office.

“Without that funding, our case management program, we wouldn’t be able to do it,” said Charles See, Community Re-Entry’s executive director.

Signed into law by President George W. Bush in 2008, the Second Chance Act authorized $165 million annually for programs that provide services matched to individual needs of former prison inmates. From 2009 to 2013 nearly 600 grants were made to government agencies and nonprofit organizations for reentry programs serving adults and juveniles in 49 states.

Congress is considering a reauthorization of the act through fiscal year 2018. Identical companion bills are in committee in the House of Representatives and the Senate. The legislation is expected to gain bipartisan support just as the original bill received, but is awaiting action on other bills, including one that would reform minimum sentencing guidelines for certain crimes.

Community Re-Entry’s program works with up to 200 men and women annually, See told CNS. Case managers begin working with inmates in three state prisons near Cleveland prior to their release.

“The case managers offer support to stabilize their lives so they can reintegrate into the community,” See said. “That first year home can be a challenging time if you don’t have your feet firmly planted on the ground.”

Founded in 1973, Community Re-Entry is among the first programs to be established in the U.S. to assist people leaving prison with emotional support and practical services. It was established in a collaborative effort of Lutheran Metropolitan Ministry and the Commission on Catholic Community Action of the Cleveland Diocese.

The Second Chance reauthorization bill contains some changes to the original law, with the biggest being in the level of funding. The new bill calls for $100 million annually — a reduction of $60 million a year — for programs to reduce recidivism and increase public safety. The bill’s supporters said four provisions that were not used extensively during the law’s first five years have been eliminated in the new legislation.

In a March 4 letter to leaders of the House and Senate judiciary committees, Archbishop Thomas G. Wenski of Miami, chairman of the U.S. bishops’ Committee on Domestic Justice and Human Development, and Father Larry Snyder, president of Catholic Charities USA, said programs supported under the law have been successful in reducing recidivism and deserve to continue.

“This legislation is an important step in addressing some of the many issues facing the more than 650,000 men and women and juveniles who reenter society each year from federal and state prisons and local jails and detention centers,” the letter said.

Similar support was offered in 2008 as Congress debated the measure.

The backing stems in part from the U.S. Conference of Catholic Bishops’ 2000 pastoral statement “Responsibility, Rehabilitation and Restoration: A Catholic Perspective on Crime and Criminal Justice.” Among its messages, the statement called on Catholics and society to “be in covenant” with people returning to their communities after serving jail terms to assure reintegration and social stability and to reduce recidivism.

“Without necessary critical support services, these persons have an increased chance of re-offending causing harm to society and increasing our nation’s prison costs,” the letter said.

Cleveland’s Community Re-Entry program has been a vital community service, said Leonard Calabrese, who serves on the agency’s board and is former executive director of the Commission of Catholic Community Action.

“For the other part, we’re trying to connect those folks (being released) with compassionate, caring people who have taken a different path in life who have some things to share.”

NEXT: Pope’s first year marked by ‘real call’ for church to be more pastoral