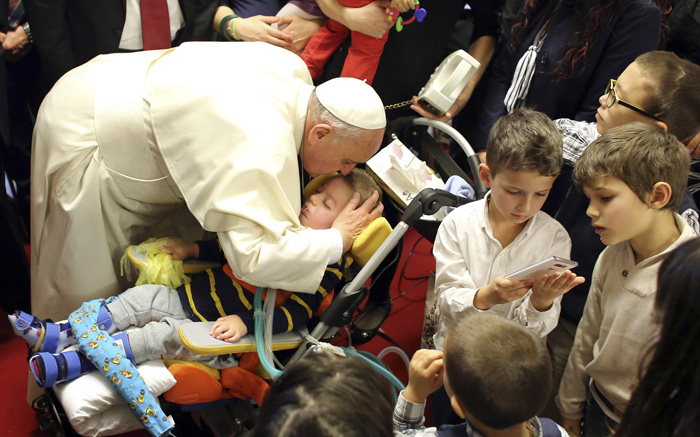 Pope Francis kisses a disabled child during a visit to the parish of Santa Maria dell'Orazione on the outskirts of Rome March 16. (CNS photo/Stefano Rellandini, pool via Reuters) 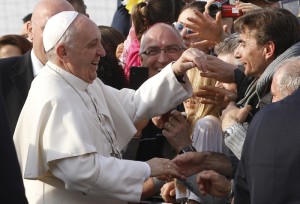 Pope Francis greets people as he arrives for Mass at the parish of Santa Maria dell’Orazione on the outskirts of Rome March 16. (CNS photo/Paul Haring)

NEW YORK (CNS) — Pope Francis “has taken the world by storm” in the year since his election, Archbishop Joseph E. Kurtz of Louisville, Ky., the president of the U.S. Conference of Catholic Bishops, said March 13.

“The eyes of the world are on the church. There’s a real call (by the pope) to make us more pastoral, to be able to reach out and accompany people,” he said. “The pope does it the way Jesus said: ‘Don’t just tell people to do something but do it yourself.'”

Archbishop Kurtz and Cardinal Timothy M. Dolan of New York appeared on “CBS This Morning” to talk about the pope as the Catholic Church around the globe marked the first anniversary of his election.

Later, Archbishop Kurtz and Cardinal Dolan, immediate past president of the USCCB, concelebrated Mass at St. Patrick’s Cathedral to mark the pope’s anniversary.

It was one of many Masses said around the United States in honor of Pope Francis’ first year as the 265th successor of Peter.

In Washington, Cardinal Donald W. Wuerl was the main celebrant at a Mass where he encouraged the congregation to, like Pope Francis, “walk in the footsteps of St. Francis of Assisi as disciples of Jesus who seek to bring his love and hope to others, particularly the poor and neglected in our world.”

“The invitation of Pope Francis to a fresh way of living the Gospel is a bright beacon of hope in our world. Let us simply offer thanks to God for this pastor of souls,” he said.

In New York, the hosts of “CBS This Morning” asked Cardinal Dolan and Archbishop Kurtz if the Catholic Church had gotten the spiritual leader the cardinals expected in electing then-Cardinal Jorge Bergoglio to be pope.

“I think we knew what we were getting because we elected him,” Cardinal Dolan said, but the surprise might be how in just one year he has led the church “so successfully, so effectively, so expeditiously,” he added.

One of the CBS hosts noted that Pope Francis has tried to deflect the media attention being paid to him as some kind of superstar and that he just wants to be seen as “a normal person.”

“Now that shouldn’t surprise us, because that’s the Gospel. Jesus told us when get rid of pomp and prestige, power and clout, people are going to love you and accept you more and that’s happening with him,” the cardinal continued, “so his very ability to put the attention and the spotlight somewhere else, has only intensified” it on him.

Archbishop Kurtz added: “In many ways he puts the attention on the person in front of him, and people love that. Don’t we all love to be noticed?”

Asked if church doctrine is going to change under Pope Francis, Cardinal Dolan and Archbishop Kurtz both replied that it cannot change, but also urged people to understand there will be a change in pastoral strategy.

“(Pope Francis) … says over and over again, ‘I’m a son of the church,’ and his responsibility is to preserve and hand on timeless teachings of the church,” the archbishop said.

“Sometimes people make a mistake and think nothing new is going to happen,” he added, but “you can see already the difference he has made in his own pastoral strategy and that’s really what we’re talking about, not (changing) the timeless teachings of the church.”

Cardinal Dolan added: “Doctrine itself can’t be (changed) … the substance of what God has revealed to us in the Bible, in natural law, in and through his church, that’s a pretty that’s a small nugget of timeless immutable truth. He can’t change that. The way it’s presented and the discipline of the church — our style, strategy, pastoral methodology, that he can and will change.”

PREVIOUS: Bill would continue programs that help inmates with life after prison

NEXT: Federal courts, Homeland Security weigh in on immigration issues