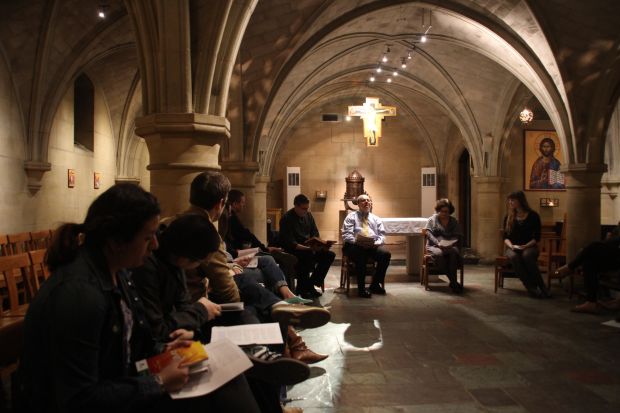 WASHINGTON (CNS) — It’s Thursday evening, and Georgetown University’s small Copley Crypt Chapel is filling up with students from every corner of campus.

Most wear jeans and boots or Converse in contrast to the chapel’s medieval solemnity. Yet if you asked them, they would say they feel right at home.

The students have gathered for a session of the Rite of Christian Initiation of Adults program, which prepares people to join the Catholic Church. Their presence speaks volumes, as the Mason Inn down the street has just opened for Mug Night (bottomless mugs of Bud Light sell for only $2.50).

A related video can been seen here.

In the college world of mug nights, iPads and instant gratification, what draws young people to embrace Catholicism?

“The Catholic Church offers people of my generation the hope of something larger than ourselves,” said Mariana Hernandez, an economics major and senior at Georgetown in Washington.

This hope guides dozens of students a year to participate in Georgetown’s RCIA program. Between 15 and 22 students have been attending the university’s weekly sessions.

Addie Fleron is a sophomore and medieval studies major who will be fully initiated into the church at Easter. Born into an agnostic household, “I always sort of wished I had been raised religiously,” she said.

Fleron had read about religion, but noted that choosing Catholicism was almost “an accident.”

In the second semester of her freshman year, Fleron was helping a boyfriend through some trouble and consequently became very stressed. She began attending Mass and speaking to Georgetown’s Jesuit chaplains. After a few months, Fleron reached a stage when she thought that she couldn’t learn any more on her own.

“In order to decide whether this was right for me,” she told Catholic News Service, “I needed to start the process.”

For students like Fleron who are completing full initiation into the church, that process is a yearlong program beginning in September. First, students meet with the RCIA director in one-on-one meetings to explain their faith journey and interest in Catholicism. They begin weekly classes focused on spiritual reflection, and attend Mass on Sundays.

After a month and a half, inquirers seek acceptance into the church. During the Rite of Acceptance, they officially become catechumens preparing for baptism. They are presented to the congregation at Mass and receive a cross from their sponsors.

Next begins the longest phase of the RCIA process, the catechumenate period, where Fleron is now. Catechumens read from the Catechism of the Catholic Church every week and discuss it.

Usually on the first Sunday of Lent the Rite of Election takes place, when catechumens publicly express their desire for baptism. This is followed by the first, second and third scrutiny on subsequent Sundays during Lent. At last, catechumens are baptized, confirmed and receive the first Eucharist at Easter Vigil.

Fleron conceded it can be a lot to handle for the average college student. “I have a Latin midterm Thursday and a paper due on Tuesday, and I got five hours of sleep in two days,” she admitted in a recent interview.

Rather than being a burden, she believes that Mass and the sacraments give stability to busy students like herself: “The ritual of (Catholicism) is very soothing and helps me to orient my life, especially in college where it is helter-skelter and all over the place.”

Other students in the Georgetown RCIA group are cradle Catholics who waited until college to be confirmed. They called “candidates” and go through the program to enter into full communion with the church.

Kent Carlson, a senior majoring in international politics, credited the Jesuits and Georgetown’s environment with helping him take this extra step in his faith.

“I grew up Catholic, but never received confirmation, though my mother said I should,” he said.

When his friends invited him to attend Mass, something unexpected happened. “Every service and homily seemed to speak to me,” Carlson said. “That sort of feeling is very powerful.”

While many of Georgetown’s students are practicing Catholics, it is by no means an echo chamber.

Jill Zovak, a sophomore, attended a Catholic high school, but said that the diversity of Georgetown led her to examine her beliefs more closely. “A lot of people (at Georgetown) aren’t Catholic,” explained Zovak. “That really made me think about what I believe and why it is important to me.”

The intellectual rigor of college causes many students to re-evaluate their beliefs. Additionally, the life changes of young adulthood, including marriage and raising children, inspire young adults to commit to a faith tradition. The Center for Applied Research in the Apostolate, or CARA, found that young adults are the group most likely to be received into the Catholic Church; 40 percent of people who entered the church as adults entered between the ages of 18-29.

As more and more young people are raised without religion, college offers them an opportunity for discovery.

Kathy Overturf, the RCIA director at Villanova University, has observed that many students raised in non-religious households wish to return to the traditions of their grandparents.

“Students will bring in rosaries, and might not even know what they are- but they know that their grandparents used them,” she said. The memory of attending Mass with their grandparents inspired many of Overturf’s students to explore Catholicism.

Secular colleges as well as Catholic colleges are welcoming students into the faith — some in large numbers.

Gerry Hince is the RCIA coordinator for St. Mary’s Catholic Center at Texas A&M University in College Station. Her group has more than a hundred students who want to enter the church every year, not including numerous baptisms and confirmations.

When asked about the success of the program, Hince said it is because it is considerate of its audience. “RCIA programs have to meet millennials’ needs: spiritual, service, and social,” Hince said. “If you do that, you will get them and keep them.”

The RCIA program has a format that appeals to students, who often arrive stressed and hungry. “We feed them, as in food, and we feed them the word of the Lord,” said Hince. Then the students pray together and hear a lecture.

St. Mary’s also has taken the standard RCIA educational materials and reworked them for their college population. Last summer, team members worked through the binder and created questions to go along with the lessons. They have also developed “cheat sheets” for group leaders so that they can better answer students’ questions. According to Hince, the approach has worked very well.

The program is not only enjoyable and informative for students but has had a lasting impact.

Most of the students who have gone through it still attend Mass weekly. In contrast, only 17 percent of millennials do so, according to CARA. In the past three years, two of Hince’s former RCIA participants became priests, and two more will go to seminary this year.

Hince is grateful to have the opportunity to minister to college students who come seeking the truth.

“The soil here is ripe,” she said, “and St. Mary’s is able to reach out and touch the hearts and minds of pilgrims searching.”

PREVIOUS: SAT changes: Some colleges will not feel impact in application process