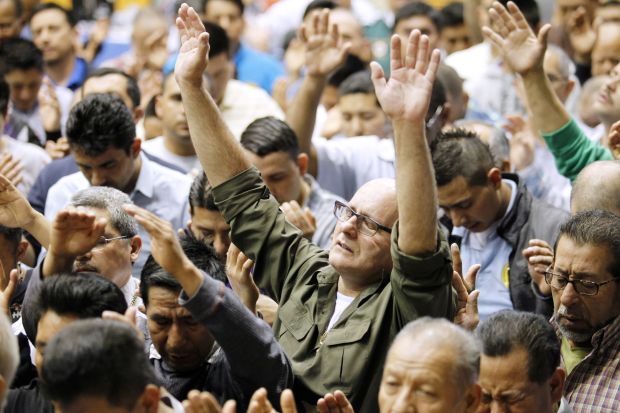 SOUTH ORANGE, N.J. (CNS) — Nearly 3,000 men from throughout the Archdiocese of Newark and other parts of New Jersey filled Seton Hall University’s recreation complex March 15 for a robust spiritual workout.

Cardinal Timothy M. Dolan of New York launched the sixth annual Newark archdiocesan Catholic Men’s Conference with a keynote address, before the men spent the day hearing other talks, praying, sharing in small groups, celebrating the sacrament of penance, and rallying around a festive eucharistic procession.

“The energy here is just unbelievable,” said Pablo DePaulis, a parishioner of St. Aloysius of Caldwell, who has attended every conference since the first in 2009. “Initially it was something to do for Lent,” the computer engineer explained. “Now I feel I really need that energy — that presence of God.”

Back for a second time was Ken Kartanowicz, a parishioner of St. Michael in Lyndhurst. “It’s just great to be together with other men as witnesses,” the warehouse manager said. “It’s like a spiritual revival.”

“The camaraderie is the big part of it,” said Jim Hill, an archdiocesan administrator. “You’re there with other Catholic Christian men. You never have to worry about whether you’re going to say the wrong thing.”

As befitting a diocese where 41 percent of the 1.5 million Catholics are Hispanic, the conference has concurrent events for English- and Spanish-speaking attendees. A third track for 18- to 22-year-old men was added this year. The day’s events end with all re-converging in the field house for a Mass celebrated with exuberant music in both languages.

The archdiocese’s women’s day of reflection will be April 26.

Employing their bilingual skills at the men’s gathering, Cardinal Dolan and Newark Coadjutor Archbishop Bernard A. Hebda gave parts of their addresses in Spanish. The two have been friends since Cardinal Dolan served as rector of the Pontifical North American College in Rome at the same time Hebda served the Pontifical Council for Legislative Texts and as a spiritual director at the college.

“Like the apostles at Pentecost, you will share the good news with other men,” Archbishop Hebda said, adding that the massive turnout was a sure sign that faith and interest in the Catholic Church is on the rise.

In keeping with the conference theme of “Be Not Afraid,” Cardinal Dolan said the men could find inspiration in the lives of Popes John Paul II, Benedict XVI and Francis to give them reasons to “not be afraid” to live the faith.

He called the popes “three stellar examples of men who were not afraid” and singled out the contributions of each. He said Blessed John Paul, who will be canonized April 27 along with Blessed John XXIII, restored the soul of the church; Pope Benedict invigorated its mind; and Pope Francis is restoring the heart of the church.

Noting that Blessed John Paul “bordered on the mystic,” he said the late pope’s deep interior prayer was key to his inner strength, because he put Jesus first.

Now-retired Pope Benedict re-emphasized how faith and reason must go together. “Reason unaided by faith leads to tyranny and anarchy,” Cardinal Dolan said. “Benedict says you need both. They come from God and lead back to God.”

Citing Pope Francis’ visits with refugees and the sick, the cardinal said, “this is a pope who wants to wake up the heart of this church,” adding that his sincerity, simplicity and compassion show off no other agenda than to rebuild the church into “a family where all can be warmly embraced.”

Earlier, Cardinal Dolan warmed up the audience with several New Jersey jokes, as well as self-effacing remarks about his weight.

One involved the day the cardinals filed into the Sistine Chapel for the conclave that would ultimately elect then-Cardinal Jorge Bergoglio as pope. As they did so, they passed three white cassocks on standby: small, medium and large. “When I saw there was no XXL, I knew I didn’t have a chance,” Cardinal Dolan said.

Many attendees said they were anxious after registering for their first conference.

“I didn’t know what to expect and there was a little trepidation,” said Mark Pergola, a parishioner of Holy Name in Garfield. But it didn’t take much for him to get hooked — this year’s gathering was his third conference.

“Coming together with all these people was just awesome,” the electrician said. “What impressed me was the adoration. Jesus came in the room. I felt he was there.”

Hill, the archdiocesan administrator, echoed Pergola’s sentiments, noting how an honor guard of sword-carrying, plume-hatted Knights of Columbus escorted the monstrance in the procession around the incense-filled field house.