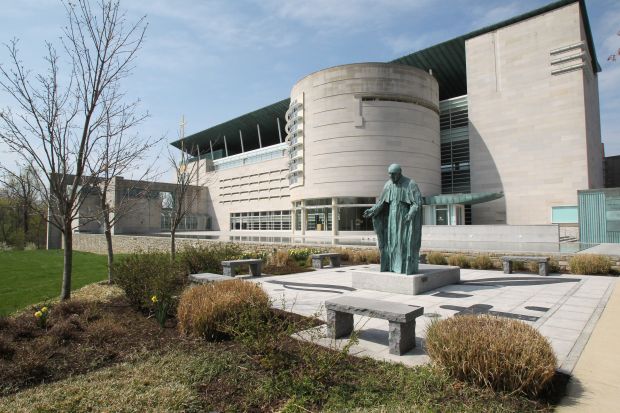 As president of the U.S. Conference of Catholic Bishops, he signed the decree declaring the designation for the site of the former John Paul II Cultural Center.

Liturgical celebrations, a reception and a gathering of young people will mark the occasion.

“This national shrine is truly America’s fitting tribute and remembrance of his legacy,” Archbishop Kurtz said in a statement.

The center, which first opened in 2001 as a cultural center, named for the pope, with a research component, museum and gallery, sits on 12 acres in Washington’s northeast quadrant just steps from the Basilica of the National Shrine of the Immaculate Conception and The Catholic University of America.

The Knights of Columbus took ownership of the facility in 2011, with plans to create a shrine dedicated to the pope and his contributions to the church and society. It is currently known as the Blessed John Paul II Shrine.

“Pope John Paul II shaped an entire generation of Catholics, and the shrine serves to remind people throughout this country of his saintly life, and of his call to holiness for each of us,” Supreme Knight Carl Anderson said in a statement. “This shrine gives us the opportunity and privilege of continuing Pope John Paul II’s mission of the new evangelization for future generations of Catholics and we gladly accept it.”

Cardinal Donald W. Wuerl of Washington in 2011 blessed the Knights’ initiative and declared the site an archdiocesan shrine.

In a statement about the national shrine designation for the facility, Cardinal Wuerl noted that Blessed John Paul had visited Washington in 1979. Three years earlier, as Cardinal Karol Wojtyla, the future pope paid a visit to the nation’s capital.

“Pope John Paul … was an important force for good in America, so we are particularly honored to have this saint’s national shrine here and to be one of the first places of worship in the world to bear his name,” said Cardinal Wuerl. “In its three years as a local shrine, it has also become a place of pilgrimage and prayer, attracting people from far beyond this city.”

A centerpiece of the shrine will be a relic consisting of a vial of Blessed John Paul II’s blood. The Knights received it from Cardinal Stanislaw Dziwisz of Krakow, Poland, longtime personal secretary to the late pontiff.

According to a news release from the Knights, the shrine’s lower level will feature a 16,000-square-foot permanent exhibition on the pope’s life and teaching slated to open later this year. The main floor will be converted into a church, and the current chapel will serve as a reliquary chapel. Both will feature floor-to-ceiling mosaics.

The shrine’s executive director, Patrick Kelly, said the shrine will be the premier U.S. site dedicated to the soon-to-be saint.

“We are grateful that the U.S. bishops have elevated our status to a national shrine and we look forward to welcoming pilgrims to this place of prayer,” he said in a statement. “It is dedicated to a great saint who bore courageous witness to the love of God and the dignity of the human person.”