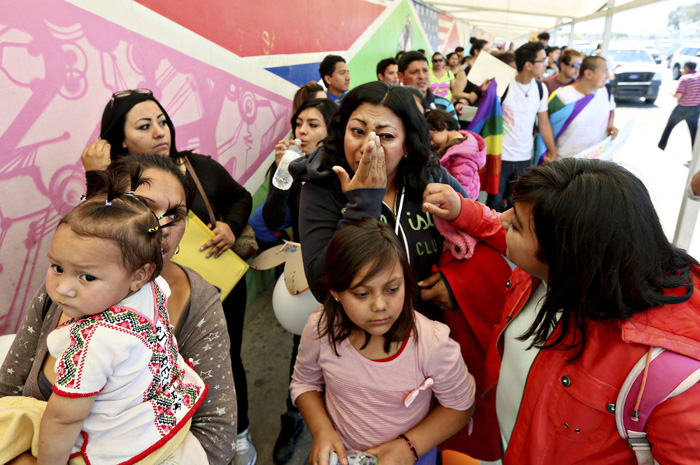 Cecilia Garcia wipes away a tear as she stands in line with deportees during a protest in Tijuana, Mexico, March 16. Federal judges' rulings in two cases may ease detention for some immigrants, and a federal agency clarified Border Patrol policies for use of force at the border. (CNS photo/ Sandy Huffaker, Reuters)

WASHINGTON (CNS) — In early March, federal judges ruled in two cases in ways that may ease detention for some immigrants, and a federal agency’s new directive clarifies Border Patrol policies for use of force at the border.

As efforts continued in Washington and in congressional district offices to press for changes in immigration law, several situations being handled by the courts and within the Department of Homeland Security advanced.

On March 12, a federal court in Washington state ruled that certain immigrants held at the Northwest Detention Center in Tacoma must be given bond hearings. Hundreds of detainees have been participating in a hunger strike there while suing for the right to be released on bond as their cases progress.

The complaint on the inmates’ behalf brought by the Northwest Immigrant Rights Project and the American Civil Liberties Union said Homeland Security and the Justice Department kept people who were facing possible deportation locked up without the chance for a judge to consider whether they present a flight risk or danger to the community.

A press release from the Immigrant Rights Project said U.S. District Court Judge Richard Jones ruled that many of the detainees present no risk, because they have been living in the U.S. for decades and have families and careers. A provision of immigration law requires that immigrants who complete a sentence for certain types of crimes continue to be locked up, with no chance for a bond hearing, while deportation is pursued.

Federal law mandates deportation of immigrants who are convicted of a wide variety of crimes, including being a drug user, prostitution, falsifying an immigration document and tax evasion, as well as murder, robbery, arson, welfare fraud, child pornography and threats to national security.

The lawsuit was brought on behalf of three immigrants, two of whom are lawful permanent residents, who were allowed to return home after serving sentences for crimes. Years later, they were arrested and locked up while deportation was pursued, an often lengthy process.

In a second case, the 3rd U.S. Circuit Court of Appeals ruled March 4 that state and local law enforcement authorities have no obligation to comply with requests from Immigration and Customs Enforcement to hold people without probable cause that they violated immigration laws. The ruling involved a U.S. citizen who was arrested along with co-workers as police picked up their boss on drug charges.

Ernesto Galarza posted bail, but instead of being released, he was held for three days under an immigration detainer, until his citizenship was established. He was later acquitted by a jury of the drug charge. He sued for wrongful incarceration under the Fourth Amendment. The ruling sends his lawsuit back to lower courts for consideration on the merits of his claim.

Finally, Customs and Border Protection issued a directive March 7 to spell out when the use of deadly force is warranted and when agents should seek less confrontational approaches. The directive followed news stories about a leaked report on the use of force by the Border Patrol.

The Los Angeles Times in February reported on an independent review by law enforcement officers of the Border Patrol’s use of force. The review criticized actions such as agents standing in the path of a moving vehicle “thereby exposing themselves to additional risk and creating justification for the use of deadly force,” the report reads, according to the Times. In some cases, “passengers were struck by agents’ gunfire,” the newspaper said.

The review recommended training agents “to get out of the way” instead of deliberately positioning themselves in the path of fleeing vehicles. The review studied 67 incidents that resulted in 19 deaths from 2010 to 2012.

Among the situations addressed by the directive are what Border Patrol agents call “rocking,” when people throw rocks at agents, typically over the border fence. Several such incidents have resulted in agents firing guns through the fence into Mexico, resulting in injuries and at least one death.

The Times said the review recommended agents could simply move out of the way of rock-throwing rather than shoot back.

The new directive said firearms may not be discharged in response to “thrown or hurled projectiles unless the agent has a reasonable belief, based on the totality of the circumstances, to include the size and nature of the projectiles, that the subject of such force poses an imminent danger of death or serious injury.”

The memo from Border Patrol Chief Michael Fisher noted that since 2010, agents have had rocks thrown at them 1,713 times, which led to use of force 43 times, resulting in 10 deaths.

Some of those events happened entirely within the United States; others involved participants on both sides of the border.

Fisher’s memo said that among the alternatives to firing a weapon, agents should “obtain a tactical advantage in these situations, such as seeking cover or distancing themselves.”

NEXT: Priest laicized after violating order prohibiting contact with minors