L.A. group out to ask pope to urge Obama to push for immigration reform 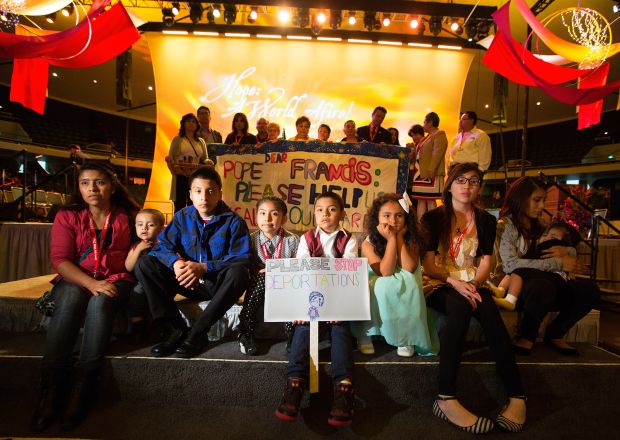 A boy in Anaheim, Calif., displays a sign March 16 that says, "Please Stop Deportations." On the final day of the 2014 Religious Education Congress, Los Angeles Archbishop Jose H. Gomez blessed the children of undocumented parents and immigration advocates who planned to travel to the Vatican. (CNS photo/Victor Aleman, Via Nueva)

The group, which included two children, left Los Angeles March 21 without an appointment with the pope, instead placing their desire in prayer while invoking the pontiff’s oft-repeated call to mercy and justice for the world’s poor and marginalized people. On March 26, they planned to attend the pope’s weekly general audience.

Obama was scheduled to meet with Pope Francis March 27 in the midst of a five-day trip to Europe and Saudi Arabia.

The four-day conference at the Anaheim Convention Center attracted 40,000 people to hear presentations, participate in workshops, and discuss ideas for evangelization and education. The first day was devoted to youth-focused activities, followed by three days for workshops and presentations.

Archbishop Gomez called on attendees during his homily at the closing liturgy March 16, the second Sunday of Lent, “to be transfigured into the image of Jesus.”

“That’s our vocation, our calling,” Archbishop Gomez said, referencing the reading from the Gospel of St. Matthew which told the story of the transfiguration of Jesus. “That’s why God made us, to be transformed and transfigured, to become more like Jesus every day of our lives until one day we are raised up in the resurrection, when he will change our earthly body to be like his own glorious body”

He told the thousands of people gathered for the liturgy that the beatitudes offer a path to grace and service for the church to follow.

Archbishop Gomez also recalled the work of Cesar Chavez, the late farmworker advocate, union leader and civil rights leader, who rose up to embrace the beatitudes and to seek justice in the world. He said Chavez can serve as an example for everyone.

“He fought for justice for his people, using the spiritual weapons of prayer, fasting and self-sacrifice. And he always urged nonviolence,” he said.

“Everything was rooted in his Catholic faith,” the archbishop added. “He once said, ‘There are three elements to my faith. It’s God, myself and my neighbor. Christ really taught us to go do something, clothe the naked, feed the hungry and give water to the thirsty. It’s very simple stuff and that’s what we’ve got to do. We’ve got to give our faith content through deeds.'”

“To me, justice for immigrants is one of the great human rights issues of our time,” he said.

Just like Chavez, Pope Francis calls the church to a “mission of mercy,” he continued. “Mercy is the face of God and the heart of the Gospel.”