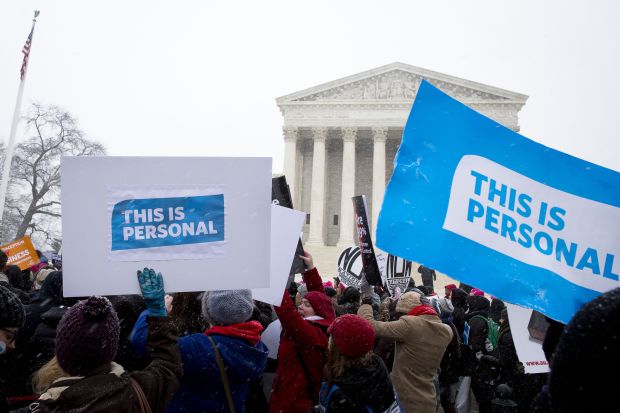 Supporters and opponents of a federal contraceptive mandate for employer health plans gather in front of the U.S. Supreme Court in Washington March 25. (CNS photo/Tyler Orsburn)

UPDATED — WASHINGTON (CNS) — Oral arguments in two cases before the U.S. Supreme Court March 25 focused on whether for-profit corporations have religious grounds to object to the new health care law’s requirement that most employers provide contraceptive coverage in their employee health plans.

Crowds on both sides of the issue gathered outside the Supreme Court on a cold, snowy morning, holding aloft signs and chanting for their cause.

(See a story on the protests here.)

Inside the court, the arguments lasted for 90 minutes, an extension of the usual 60 minutes, and the justices in their questions for the lawyers arguing the cases seemed divided on the issue. At the center was a close inspection of the 1993 Religious Freedom Restoration Act, known as RFRA, which allows for religious exceptions to general laws in certain circumstances.

The cases — Sebelius v. Hobby Lobby Stores Inc. and Conestoga Wood Specialties Corp. v. Sebelius — made their way to the Supreme Court after federal appeals courts issued opposite rulings about the companies’ claims to a religious rights exemption to the contraceptive mandate of the health care law.

At issue is the Affordable Care Act’s mandate that most employers, including religious employers, provide employees coverage of contraceptives, sterilization and some abortion-inducing drugs free of charge, even if the employer is morally opposed to such services.

Both secular businesses claim the contraceptive mandate of the health care law violates the First Amendment’s free exercise clause and their religious liberty rights under RFRA.

The 1993 law says that the government “shall not substantially burden a person’s exercise of religion” unless that burden is the least restrictive means to further a compelling governmental interest.

The legal question is whether RFRA protects a for-profit company from having to provide a benefit to which employees are entitled under federal law but to which the owners have religious objections.

Justice Ruth Bader Ginsburg, who noted that RFRA was passed overwhelmingly with support from both political parties, said it would not have gained such support if Congress thought the law would confer religious rights to corporations. 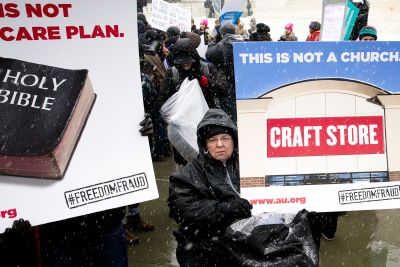 A supporter of women’s rights and health holds a sign in front of the U.S. Supreme Court in Washington March 25. (CNS photo/Tyler Orsburn)

Justice Elena Kagan said the arguments in favor of the companies’ religious rights could turn RFRA into something that would put “the entire U.S. code” under intense constitutional scrutiny for possible burdens to corporate religious rights. For example, she said companies would be able to object on religious grounds to laws on sex discrimination, minimum wage, family leave and child labor.

That point was raised by the Obama administration in its brief, saying a ruling in favor of businesses could undermine laws governing immunizations, Social Security taxes and minimum wages.

Chief Justice John Roberts noted that the exaggerated amounts of religious exemptions that could be claimed by employers could be avoided in a court ruling limited only to corporations that pass their earnings and losses to their shareholders — which would exclude bigger companies claiming religious freedom rights.

Justice Anthony Kennedy, described as the swing vote in this case, asked how the government could require the family-owned companies in question to provide the mandated insurance contraception coverage when it had already offered exemptions and accommodations to other groups, which was one of the plaintiff’s arguments.

Conestoga Wood Specialties objects to complying with any portion of the mandate. Hobby Lobby is not opposed to covering birth control in its employee health plan — and in fact already provides that benefit. What the Green family objects to is being required to cover contraceptive drugs considered to be abortifacients, such as the morning-after pill and Plan B.

Hobby Lobby’s owners have stated that their “religious beliefs prohibit them from providing health coverage for contraceptive drugs and devices that end human life after conception.”

In Sebelius v. Hobby Lobby Stores, the Green family won a ruling by the 10th U.S. Circuit Court of Appeals, which said their craft stores and Mardel, a chain of 35 Christian bookstores, could proceed with seeking an injunction protecting the companies from meeting parts of the contraceptive mandate issued by the Department of Health and Human Services as part of the health care law. The government appealed the decision.

The other case, Conestoga Wood Specialties v. Sebelius, is an appeal by the Hahn family, the Mennonite owners, of a 3rd U.S. Circuit Court of Appeals ruling that said they had to comply with the contraceptive requirement. The circuit court ruled that as a for-profit, secular corporation, Conestoga Wood and its owners are not protected by the Free Exercise clause of the First Amendment.

During oral arguments at the Supreme Court, the justices asked why the companies didn’t just avoid the contraception issue by not offering health care coverage to its employees and paying the tax penalty instead, and former U.S. Solicitor General Paul Clement, who presented the companies’ arguments, said Hobby Lobby’s owners, at least, wanted to provide health insurance and felt it would be hard to attract workers without it.

Supporters of the Obama administration’s position that the two for-profit companies should not be exempted from the mandate have argued that the businesses are claiming religious rights the Constitution gives to individuals, not corporations.

U.S. Solicitor General Donald Verrilli Jr., who presented the administration’s arguments, emphasized that if the courts allowed for-profit companies to deny mandated coverage, the employees would be denied benefits the government has decided they should have.

He repeatedly mentioned U.S. v. Lee, a 1982 Supreme Court ruling that said an Amish employer could not be exempted from paying Social Security taxes for employees of his for-profit business.

That case has been raised in many of the “amicus” briefs on both sides of the mandate issue.

In the 1982 ruling, the court found that “while there is a conflict between the Amish faith and the obligations imposed by the Social Security system, not all burdens on religion are unconstitutional,” the court said. “The court may justify a limitation on religious liberty by showing that it is essential to accomplish an overriding governmental interest.”

Dozens of groups with an interest in the outcome of the cases filed “amicus,” or friend-of-the-court, briefs including one submitted by the U.S. Conference of Catholic Bishops and another by a group of 67 Catholic theologians and ethicists.

Rulings in the two cases are expected to be handed down in June.

The court is likely to hear arguments in the fall in suits brought by nonprofit faith-based employers who believe that a narrow exemption and an accommodation offered religious employers by the government for the health care law are not broad enough. There are currently 93 lawsuits challenging the mandate.

There is an exemption for some religious employers that fit certain criteria. For those religious employers who are not exempt, the so-called accommodation allows them to use a third party to pay for coverage they find objectionable, but Catholic and other faith-based entities that have filed the lawsuits say the third-party arrangement does not solve their objection to being involved in providing coverage they reject for moral reasons.

The required coverage includes preventative services such as mammograms, prenatal care and cervical cancer screenings, but only the contraceptive coverage has prompted the objections.

PREVIOUS: L.A. group out to ask pope to urge Obama to push for immigration reform