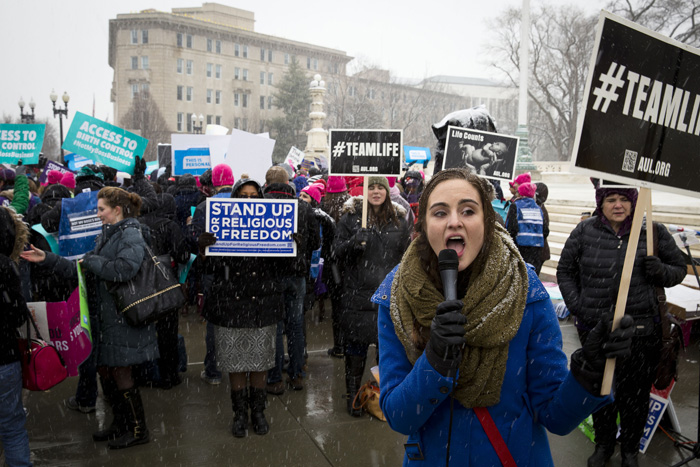 A woman leads a chant in front of the U.S. Supreme Court in Washington against the federal government's contraceptive mandate March 25. The Supreme Court heard oral arguments in lawsuits filed against the mandate by Hobby Lobby Stores and Conestoga Wood Specialties on religious rights grounds. (CNS photo/Tyler Orsburn)

WASHINGTON (CNS) — The snowy, wet concrete and throng of reporters didn’t stop Father Frank Pavone and the Rev. Patrick Mahoney from kneeling down and praying in front of the Supreme Court the morning of March 25.

“We will not compromise our faith,” Father Pavone prayed over the roaring crowds. “We will not allow the government, Oh Lord, to dissect and define the beliefs of our religion. … We will decide what moral code we will live, and we will live it freely here on this soil in the United States of America.”

The snow began around 8 a.m., but it had little effect on the hundreds who rallied outside the Supreme Court in response to the justices hearing oral arguments in the Sebelius v. Hobby Lobby Stores, Inc. and Conestoga Wood Specialties Corp. v. Sebelius cases.

(See a related story on the arguments here.)

The two key rallies stood on opposing sides. The crowd advocating for free choice in contraceptive use was nearly triple in size to its opponents and featured more than 25 speeches.

Right beside them, the religious freedom rally also hosted speakers as well as a prayer vigil.

Signs among religious freedom supporters read, “Religious Freedom: Everyone’s Business.” Many of the opposing signs said, “Not my boss’s business.”

The debate is over the Affordable Care Act of 2010 and its mandate that employers provide its workers health care that covers contraceptives, sterilization and some abortion-inducing drugs. The owners of Hobby Lobby and Conestoga Wood Specialties sued over the mandate, claiming they should be allowed a religious rights-based exemption from having to provide the contraceptive coverage.

At the rallies, David and Susan Thompson Gaines stood on the street corner with homemade signs. They traveled from Arlington, Va., to rally before going into work.

“My boss doesn’t have the right to tell me what my health care should be,” Susan Gaines told Catholic News Service. “I just want to make sure that the Supreme Court listens to the people and follows the law.”

One of the arguments in the Hobby Lobby and Conestoga Wood cases is that corporations are not people and therefore do not hold religious rights.

“It’s a mistake to go for the simple and convenient concept that a corporation is a person,” David Gaines said. “If you set that aside, then you see corporations as corporations. Corporations don’t have any more religious feelings than rocks.”

The prayer vigil led by Rev. Mahoney and Father Pavone began around 10 a.m.

Rev. Mahoney, director of the Christian Defense Coalition, welcomed people of every faith.

“We are not here imposing our values on people. That’s what they’re doing over there,” Rev. Mahoney said, addressing those at the “Not my boss’s business” rally. “We’re about freedom and choice. We’re not about coercion and force.”

The “Not my boss’s business” rally was attended by various groups, including Catholics for Choice, a group the U.S. bishops said years ago had “no affiliation, formal or otherwise, with the Catholic Church.” Some held up signs saying, “We are the 99% of Catholic women who use birth control.”

The sign referred to surveys showing that 99 percent of sexually active women who identify themselves as Catholic say they have used artificial birth control at some point in their life in opposition to the church’s prohibition on such birth control methods.

In a full-page advertisement published in The Washington Post March 25, Catholics for Choice accused the U.S. Conference of Catholic Bishops of “using fake arguments about religious freedom” and “simply trying to use the courts to impose teachings they have failed to enforce from the pulpit.”

In response, Mercy Sister Mary Ann Walsh, spokeswoman for the USCCB, said in a statement: “What is fake here is Catholics for Choice making this a contraceptive issue rather than acknowledging the fact that forcing people to pay what violates their sincerely held religious beliefs is a religious freedom issue.”

Among the speakers at the religious freedom rally was U.S. Sen. Ted Cruz, R-Texas.

“There is a reason why the very first protection in the Bill of Rights is the protection of religious liberty,” Cruz said. “The very first thing the framers wanted to protect … was the right of each and every one of us to worship God consistent with the dictates of our conscience.”

Cruz called the Department of Health and Human Services’ mandate a “disaster” and “train wreck of a law that is hurting so many millions of people.”

He referenced the Little Sisters of the Poor, a religious order that carries out a nonprofit ministry is assisting the elderly poor and has refused to provide contraceptive coverage to its employees. The order has sued over the mandate and its refusal to comply may force them to pay millions of dollars in fines to the federal government.

“The idea that we’re trying to fine Catholic nuns millions of dollars to force them to violate their faith … runs utterly contrary to centuries of tradition to the protection of our Constitution,” Cruz said.

Father Pavone, national director of Priests for Life, said he attended the rally not only to support for-profit businesses, like Hobby Lobby and Conestoga Wood, but also nonprofit religious organizations, like Little Sisters of the Poor and his own organization, whom the HHS mandate also affects.

Priests for Life launched one of the first nonprofit lawsuits at the beginning of 2012, and on March 29, the Supreme Court will decide whether to consider the case now or wait for it to go through the entire appeals process, he said.

“We believe the court will come down on the right side, both for the (nonprofit) religious groups and also for the businesses,” Father Pavone told CNS.

Father Pavone said Congress seems to be on “the wrong side of this whole concept” of religious freedom.

“It’s a narrowness,” he said. “It’s a blind spot that we need to overcome.”

When the oral arguments finished, the Rev. Rob Schenck addressed the crowd outside the court and explained some of what happened during the arguments.

He said former U.S. Solicitor General Paul Clement, who argued on behalf of Hobby Lobby and Conestoga Wood, “gave one of the most outstanding arguments I’ve heard in 20 years.”

Rev. Schenck also said that near the end of the arguments, Donald Verrilli of the opposing side “just seemed to collapse, especially under some withering questions by … Justice (Anthony) Kennedy, with whom this decision appears to rest,” he said.

The Green family, owners of Hobby Lobby, left before addressing the crowd, and both rallies ended around noon.

Most likely, the Supreme Court will hand down a decision in both cases in June.

NEXT: 12-year-old’s wish to go to Vatican, see Pope Francis to come true