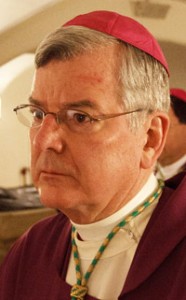 ST. PAUL, Minn. (CNS) — Archbishop John C. Nienstedt of St. Paul and Minneapolis has returned to public ministry following a thorough investigation by police of an allegation that he had inappropriately touched a male minor in 2009.

The Ramsey County Attorney’s Office announced the evening of March 11 that it has declined to file charges against the archbishop.

He voluntarily stepped aside from all public ministry in December while St. Paul Police investigated an allegation that he inappropriately touched a male minor on the buttocks in 2009 during a group photo session after a confirmation ceremony. The allegation was brought to the police Dec. 16, 2013.

In a Dec. 17 letter to the faithful, Archbishop Nienstedt called the allegation “absolutely and entirely false.”

“I am thankful to the St. Paul Police for their thorough investigation, as well as to the Ramsey County Attorney’s Office for their professional work regarding this matter,” Archbishop Nienstedt said. “I look forward to returning to public ministry during this Lenten season, especially during Holy Week and the great feast of Easter.”

At the same time, he said, “I remain committed to the ongoing work needed to provide safe environments for all children and youth.”

In a memo accompanying the announcement from the Ramsey County Attorney’s Office, Richard Dusterhoft, the office’s criminal division director, said the case was reviewed by an assistant county attorney “with many years of experience prosecuting child sex abuse cases,” who agreed that there should be no charges in the case.