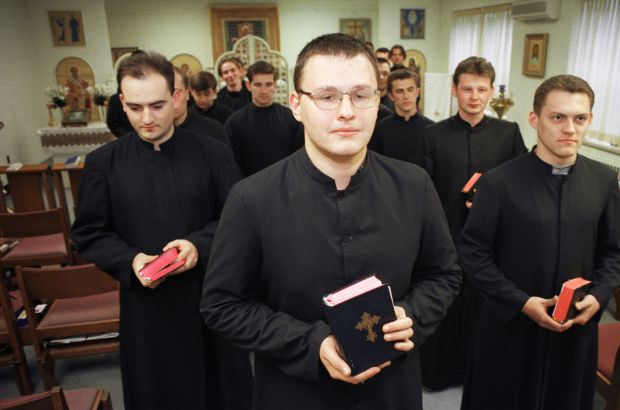 Young Ukrainian men studying for the priesthood are seen in 1999 at St. Josaphat Seminary in Washington. (CNS photo/Nancy Wiechec)

WASHINGTON (CNS) — After the fall of communism, the U.S. Catholic Church helped rebuild the people, not just the structures, of the Ukrainian Catholic Church.

In a series of phone interviews and emails, Ukrainian Catholics, whose Eastern-rite church was suppressed under communism from 1946 to 1989, detailed the help they received from Americans.

Ukrainian Catholic Bishop Ken Nowakowski of New Westminster, British Columbia, was serving as a priest in Ukraine in the early 1990s. He told Catholic News Service that U.S. church leaders “really wanted to invest in people and not so much in bricks and mortar. What we are experiencing today in Ukraine is the fact that the leadership of American Catholics really invested in (Ukrainian church) leadership.”

He recalled that Ukrainian Catholic churches were scrambling to register themselves after decades of suppression by the Soviets, when the U.S. church stepped in, helping, among other things, with monasteries and religious communities.

“Really what they did was supply us with funds for our seminaries,” Bishop Nowakowski said. “By 1992 we had four diocesan seminaries and two for monastics, a total of over 900 men studying for priesthood in Ukraine. That meant 900 breakfasts, 900 lunches, 900 suppers and snacks, plus textbooks and premises. Much of the money went to the training for the future clergy in Ukraine.”

Much of the money came through the annual Aid to the Church in Central and Eastern Europe national collection. This year’s collection was conducted on Ash Wednesday in most U.S dioceses.

Since the inception of the collection approximately $23 million in aid has been given to the church in Ukraine, taking into account both Latin- and Eastern-rite dioceses, said Declan Murphy, director of the U.S. bishops’ collection.

Other Catholic organizations and foundations have added to that sum with their own initiatives to rebuild the church.

“It should be underlined that the United States as a country has been a very big help to our church and nation in many ways,” said Father Iouri Koslovskii, an assistant professor at the theological academy in Ivano-Frankivsk, Ukraine.

After the fall of communism in Ukraine — which had included the martyrdom of many bishops, priests and religious — “a lot of resources, human and financial, were ready to be invested into our church,” Father Koslovskii said. “At that point, I was completing my school and I was thinking of entering into a seminary that was just opened in my town. The seminary administrators were priests from the U.S. They were very different form people that I knew in Ukraine. They were much more open, self-confident, independent thinking and free” — a significant change from the repression to which Catholics had been subjected for decades.

Father Bohdan Tymchyshyn, a Ukrainian priest who is a member of a Ukrainian bishops’ family commission, is developing a mentorship program for orphans. He said all of his education outside Ukraine was funded by American donors

“I’m very grateful to Bishop Basil Losten, former eparch of the Stamford Eparchy in the USA, and all people who, through him, helped me to study and get formation,” he told CNS.

Father Tymchyshyn studied at St. Basil College in Stamford, Conn., and St. Joseph Seminary in Yonkers, N.Y., before continuing his studies in Rome.

With Catholicism having been outlawed in Ukraine under communism, a push has been made to reclaim buildings and property or to buy land on which to build new churches and edifices.

Bishop Stepan Meniok of Donetsk-Kharkiv in eastern Ukraine reported a building boom financed in large part by the U.S. church.

“There is a great need in East for the support of the missionary clergy, various church projects and the building and finishing up of the church buildings for the established faith communities,” he said.

For instance, he said, U.S. donors have invested about $27,000 for a church in Kharkiv. The basement of the church is being finished and the walls of the future church edifice have been erected. In all, the total cost is expected to run between $81,000 and $108,000.

Land is also needed for a future churches Poltava and Donetsk, said Bishop Meniok. The average expense for a land plot is nearly $2,200.

Contributing to this story was Lilia Kovalyk-Vasiuta in Lviv, Ukraine.