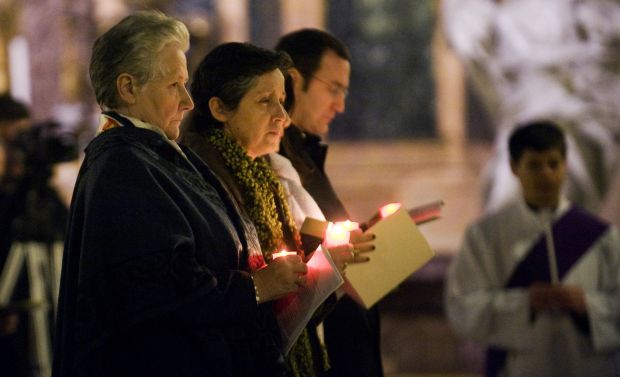 Irish abuse victim Marie Collins, left, who was assaulted as a 13-year-old by a hospital chaplain in her native Ireland, attends a 2012 vigil in Rome. (CNS photo/Alessia Giuliani, Catholic Press Photo)

DUBLIN (CNS) — The lone clerical abuse survivor nominated by Pope Francis to sit on the new Pontifical Commission for the Protection of Minors said the commission needs to achieve concrete change in order to “show other survivors that the church is going to get it right.”

Marie Collins, who was abused by a chaplain as a sick 13-year-old at Crumlin hospital in Dublin in the 1960s, told Catholic News Service that many survivors will be watching the new Vatican commission “with interest, but many will have written it off as merely a PR exercise.”

“Survivors will not be satisfied with more words or promises, they need to see real change,” she said.

Collins, who campaigns on behalf of abuse victims, said her priority is “a strong worldwide child protection policy which would include sanctions for any member of the church in a position of authority who ignored these rules.”

She added that too many bishops who have protected abusive priests have been allowed to remain in place undisciplined.

“I would like to see the way survivors and their families have been treated change. The concentration on often-abusive legalistic responses instead of caring for those hurt needs to end,” she said.

The cultural attitude within the church and laws that “categorized child abuse as a moral lapse rather than a criminal offense also have to be tackled,” she told CNS.

The Dubliner is seeking greater transparency because “the secrecy of the past led to enormous failures.”

Though it is in its early stages, she said her understanding is that the commission will make its recommendations directly to Pope Francis and will not communicate through any Vatican departments.

Asked who else she would like to see on the new commission, she told CNS she would like to see Archbishop Diarmuid Martin of Dublin because he “is the template for how child protection should be handled at ground level,” and also Auxiliary Bishop Charles Scicluna of Malta, who really “got it” when it came to addressing clerical sexual abuse.

Collins told CNS that she met another commission member, Boston Cardinal Sean P. O’Malley, in 2011 as he led the Vatican investigation of the Archdiocese of Dublin and was “very impressed with his openness and his ability to listen.”

She also worked with another member of the commission, Baroness Sheila Hollins, during the Toward Healing Symposium at the Pontifical Gregorian University in Rome in 2012.

“I feel we worked very well together. She is very devoted to the cause of the vulnerable adult and has great expertise in this field. I am looking forward to working with Cardinal Sean and Baroness Hollins.”

However, Collins said she was “disappointed” listening to Pope Francis’ recent comments when he said no one has done more on the issue of child sexual abuse than the church, and yet the church is the only one to be attacked.

“He seemed to miss the point that the huge anger directed at the Catholic Church has not been caused by the fact it had abusers in its ranks but by the unique situation whereby those in authority were willing to protect these men. This has been shown in inquiry after inquiry around the world,” she told CNS.

She said it was up to the new Vatican commission to change the pope’s mind on this.

Asked what it means to have a survivor on the commission, Collins said in the past there had been a fear of survivors and “an inability to handle their justified anger.”

At other times, survivors were seen as people who could be placated by words of apology but this “underestimated the damage done to lives and the hurt and anger and thirst for justice that so many survivors feel.”

“In this context it is a big step for the church to include a survivor on the commission, but a very necessary one,” she commented.

She has already been contacted by many survivors and survivor groups from various parts of the world. The majority responded positively, wanting her to take their particular concerns to the commission. She said some have suggested that she is a “token survivor” appointed just to give the church good public relations.

“I have remained a Catholic but not without much difficulty and struggle,” she told CNS. “There have been periods when practicing my faith has been impossible. I have tried to separate the institution of the church from the faith. My belief in God has never wavered. Being appointed to the commission has not changed anything in this regard.”

NEXT: Britain bans burning of fetuses to heat hospitals