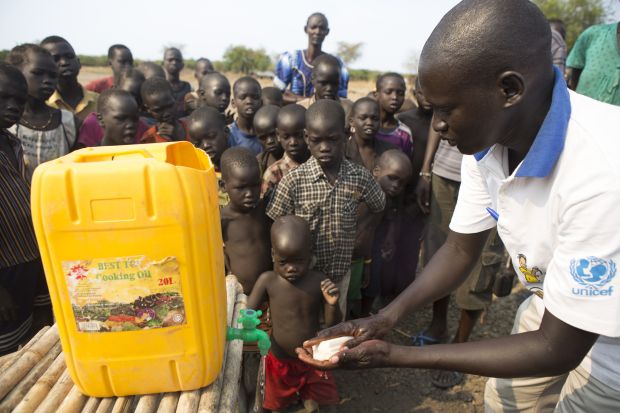 ADJUMANI, Uganda, (CNS) — It has been two months since Father Raphael Ayiga Lebu has had a good night, or a good day, of sleep.

His parish in the village of Dzaipi, 18 miles from the border of South Sudan, has become a safe haven for refugees fleeing the conflict that began in Juba, the fledgling country’s capital, in mid-December.

The greatest influx began Jan. 8. Father Ayiga said the number of the refugees was so great that he and two fellow priests at the parish felt their efforts fell far short of what the beleaguered people needed.

The priest described the scene as tragic. Most of the refugees, including mothers with young children, were hungry. At times he had to intervene during disagreements over where people slept.

“Many people slept in the open, under trees, in tents and under the verandas (porches) of our house,” he told Catholic News Service.

“Then at other times there were people who just wanted to be listened to, and that is what I did,” he said.

Father Ayiga coordinated aid until workers from the U.N. High Commissioner for Refugees arrived. The parish compound, which includes a school, church, the priests’ residence and a health clinic, served as a reception center.

International aid agencies and the Ugandan government set up large communal tent shelters at the parish. They prepared and served meals for the refugees, provided temporary pit latrines and medical services and distributed basic utensils and food.

Despite the effort, hundreds of people remained in food lines for hours and often gave up, going to sleep without eating.

One refugee, Thon Mathayo Kucha, told Catholic News Service in mid-February that since arriving from South Sudan in early January, he and his family of 13 often slept without eating and shared what little food they had with others.

Kucha, who had just returned to the parish from the U.N. operation in Adjumani eight miles away, said he was frustrated that he had been unable to secure food for his family despite repeated efforts to register as refugees. Dehydrated and hungry, Kucha described the process as cumbersome.

Kucha’s family is among the thousands who have been victimized by hostilities between South Sudan’s political leaders. He described the conflict as ethnic in nature, pitting the Dinka and the Nuer tribes against each other.

A rift within South Sudan’s ruling party led to the outbreak of violence in mid-December. Earlier in the year, President Salva Kiir, a Dinka, had ousted Vice President Riek Machar, a Nuer, and when soldiers loyal to each man reportedly turned on each other, the violence spread quickly from Juba, the capital, to rural areas. Tension between the two tribes has lurked behind the scenes since independence in 2011.

Ugandan authorities have taken the tribal rift into consideration. While the Dinka have been settled in one camp, the Nuer were sent to another with other smaller tribes, including the Madi and the Acholi, to avoid conflicts from flaring.

As the days passed, water and sanitation became a growing problem as the number of refugees swelled to about 30,000. Up to 200 people continued to arrive daily through late February. To ease the stress at the parish, relief workers opened another reception center in the nearby village of Nyumaji.

The situation raised concerns about the spread of diseases such as cholera if the rainy season started early. Father Ayiga said he notified UNHCR and local government officials about the deteriorating sanitary conditions, but no action had been taken.

The priest said he was concerned that bodies of dead refugee children were being dumped into the latrines because people could not afford a proper burial. He said there had also been a case or two where relatives abandoned the body of a dead loved one and moved on.

He said he also was troubled by the fact that refugee children were not able to go to school, because local authorities were unwilling to accept them. Language is a barrier because many children speak Arabic as their primary language. Only a few understand English, he said.

Kucha, 56, a teacher by training, said the emotional pain of children being unable to attend classes is difficult to bear.

“I have taught for the last 30 years and it hurts me to know that our children are not able to go to school because of this senseless war,” he said.

Kucha, who hails from Bor, South Sudan, explained that he has been forced to flee war three times. He said he first went into exile in 1983 when the Sudanese government in Khartoum forced people to flee to Ethiopia. He remained there till 1990, teaching in a school for refugee children operated by the Coptic Catholic Church.

“I have been running up and down — first to Ethiopia, and then to Kenya and now in Uganda. If I was not a teacher, I would have been mad,” he said with tears welling in his eyes.

PREVIOUS: It’s a go: World Meeting of Families officially coming to Philadelphia in 2015