For Peru’s Kukama people, water is more than a drink, missionary finds 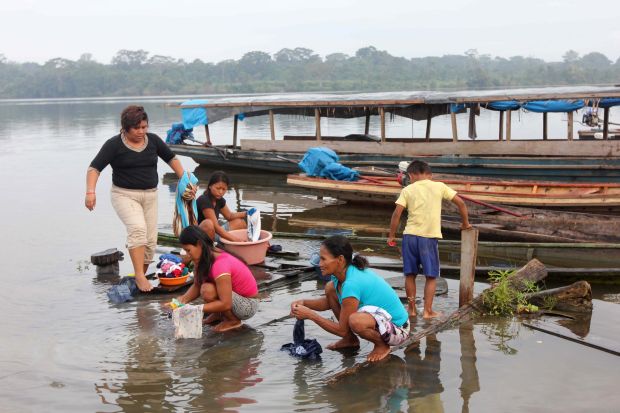 Residents of Dos de Mayo, Peru, wash their clothes in a nearby lake. (CNS photo/Barbara Fraser)

DOS DE MAYO, Peru (CNS) — It was a day Father Miguel Angel Cadenas did not expect to see. One after another, government officials stood before several hundred Kukama Indians packed into a sweltering wood-frame room in this tiny riverside village, describing the results of a study of pollution in their communities.

That they were there at all was a triumph of sorts. Usually, those meetings are held in Lima, making it prohibitively expensive for more than two or three Kukama leaders to attend.

But the news, as Father Cadenas had feared, was not good. Water, soil and sediments in the broad, snaking Maranon River, a tributary of the Amazon, contained heavy metals and other residue from more than four decades of oil production. In all 17 communities tested, the rivers, lakes or wells that provide drinking water were deemed unsafe, mostly because of bacteria associated with human waste, although some also contained arsenic.

But those are the communities’ only water source, and the officials who presented the results in mid-February offered no solutions.

Even if they had, for the Kukama people in this remote corner of Peru’s Amazon region, the impact of pollution goes beyond drinking water.

The rivers and lakes are central to the culture. They not only provide the Kukama people with food and water, but they also connect communities in a place that has no roads.

“This is a health issue, because there are no studies to show what illnesses the pollution is causing,” Father Cadenas said. But it also “has to do with the Kukama religion, with the spirits that live under the water.”

Unless the government officials understand the relationship between the people and the river, Father Cadenas said, any solution they offer will be incomplete.

That is a lesson the Augustinian missionary from Leon, Spain, has learned over 20 years of ministry among 20,000 people — most of them Kukama — scattered up and down riverbanks in a parish so large that it takes four days to go from one end to the other by boat, the only form of transportation.

“The challenges are immense,” Father Cadenas said of the work of the team in the parish of Santa Rita de Castilla, which includes Father Manolo Berjon, an Augustinian from Valladolid, Spain, as well as sisters, lay catechists and trained midwives.

In indigenous communities like these, “Christianity must enter into dialogue, be present and let the Holy Spirit do what it has to do so that people feel that Christianity is part of them,” he said.

The parish took up the environmental battle in 2000, when a huge oil slick snaked down the Maranon River from an oil field operated by Argentine-based Pluspetrol, turning the river black, Father Cadenas said.

He gradually realized that for his parishioners, the spill was even more serious than it looked.

So even if the problem of unsafe drinking water were solved, the Kukama would still see the contaminants in the Maranon River as a threat to their people, Father Cadenas said.

“The issue is one of pollution of the entire Kukama people, of their entire cosmology,” he said. “It’s a serious form of aggression.”

And it is only the most recent of a series of attacks on the Kukama people and their way of life, he said.

More than a century ago, rubber barons enslaved Kukama and other Indians in the northern Peruvian Amazon to tap trees for their valuable latex. Segundo Chuquibal, who will turn 69 in April, heard his parents and grandparents tell of Indians who were whipped or tortured for falling short of their latex quotas.

As recently as the 1960s, Chuquibal was still collecting rubber latex for a large landholder on the Maranon.

In the 1970s, prospectors struck oil in that area, and the state-run oil company ordered Chuquibal and his neighbors to move across the river. They created the community of San Jose de Saramuro, where he is now the “apu” or chief.

Because of lax environmental standards, hot, salty water from the oil wells was dumped directly into rivers and streams, and oil spills were not cleaned up. The area, a natural wetland, floods seasonally, allowing contaminants to spread, said Ricardo Segovia, a hydrogeologist who advises a local organization of more than 50 Kukama communities.

After oil production began, the wetland, an area of nearly 5 million acres, was declared a nature reserve. Indian families who had lived there for generations, scattered throughout the forest, were forced out, Father Cadenas said. Some settled in communities along the edge of the reserve, while others occupy a buffer zone just outside the reserve’s boundaries, where the Peruvian government plans to auction new oil leases.

Many still lack title to their land, however, leaving them in a legal limbo.

After hearing the results of the government testing, the Kukama leaders called on the government to stop oil production near Chuquibal’s community until a leaky, decades-old pipeline is replaced.

They also called for testing of human blood samples and tissues from fish and game, to determine the impact of the pollution on human health. And they pledged to take their case to Peru’s Constitutional Court, arguing that the contamination violates their right to a safe and healthy environment.

“We are asking for respect for our culture,” said Alfonso Lopez, who heads the largest Kukama organization in the Maranon watershed.

His group is joining with indigenous organizations in three other watersheds that are also seeking cleanup of pollution and compensation for damage from oil fields operated over the years by state-run and private companies.

Now a new threat looms along the Maranon, where the government plans to dredge sections of the river so large boats can travel farther upstream. Both the dredging and the increased river traffic will pose hazards for a people whose culture is already under pressure from outsiders, Father Cadenas said.

In late February, Bishop Miguel Olaortua Laspra of Iquitos added his voice to the protests.

“We cannot change the past, but we can do something in the present to benefit sustainable development and human health, especially for the people who, because they live along the rivers and far from big cities, have fewer resources,” he wrote in a letter to the people of the Loreto region, of which Iquitos is the capital.

“We cannot remain impassive in the face of human suffering. We must stand in solidarity with our brothers and sisters,” he wrote. “This is not a matter of faith, but of human solidarity and social responsibility.”

NEXT: Thousands of rare Vatican manuscripts to go online