Get a pocket Bible, read it during your commute, pope recommends 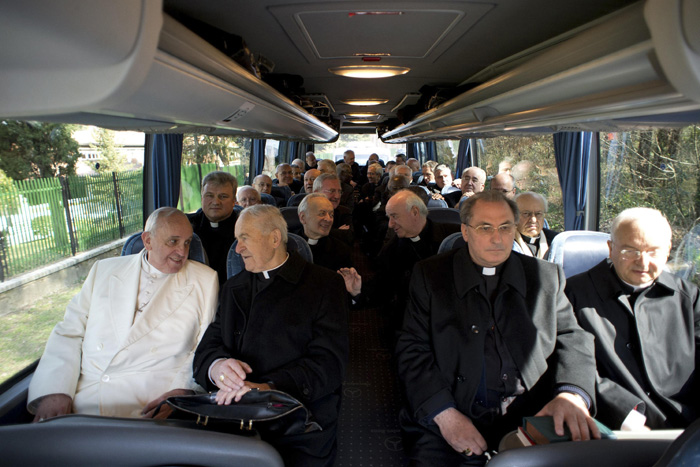 Pope Francis rides in a bus with cardinals and bishops at the end of their weeklong Lenten retreat in Ariccia, Italy, March 14. (CNS photo/L'Osservatore Romano via Reuters)

ROME (CNS) — If you get a seat on a crowded bus or train, you should use your travel time to read a few lines from the Bible, Pope Francis told members of a suburban parish filled with people who commute to Rome for work.

“A Christian’s first task is to listen to the word of God, to listen to Jesus, because he speaks to us and saves us with his word,” the pope said March 16 during a homily at the parish of Santa Maria dell’Orazione on the northeast outskirts of Rome.

Everyone should carry a small Bible or pocket edition of the Gospels and should find at least a few minutes every day to read the word of God, Pope Francis said.

The pope suggested a bus-ride reading of the Gospels, when possible, “because many times on the bus we’re packed in and have to maintain our balance and defend our pockets” from pickpockets, he said. “But when you have a seat” on the bus or a minute or so free somewhere else, “pick up the Gospel and read a few words.”

Preaching on the Gospel story of Jesus’ transfiguration, Pope Francis focused on the words the disciples heard when they were on Mount Tabor with Jesus: “This is my beloved Son, with whom I am well pleased; listen to him.”

God tells the disciples and all followers of Jesus to listen to his son “to nourish our faith,” the pope said. “He makes our faith more robust and stronger with his word.”

People listen to the radio, to television and to gossip throughout the day, but “do we take a bit of time each day to listen to Jesus?” Pope Francis asked.

The Church of Santa Maria dell’Orazione, inaugurated in 2002, was packed for the pope’s Mass. Hundreds of people lined the streets leading to the church to watch the pope pass by, and many residents went on the roofs of neighboring apartment buildings to get a glimpse of him.

Pope Francis began his evening visit to the parish with the younger generation. Father Francesco Bagala, pastor, told the Vatican newspaper the parish has more than 100 infant baptisms each year, and 450 young people are in classes preparing for first Communion or confirmation. The pope also met with the sick and people with disabilities and heard confessions before Mass.

After the Mass, he went on to the rooftop terrace of the church to greet the hundreds of people gathered outside. He asked them to pray for him that he would be a good bishop and not make too many mistakes.

Earlier in the day, leading the recitation of the Angelus with visitors in St. Peter’s Square, Pope Francis asked members of the crowd to commit to reading a few lines of the Gospel each day. “Next Sunday tell me if you’ve done this (and) if you have a little Bible in your pocket or purse to read a passage during the day.”

“This is important,” he said. “It’s Jesus who speaks to us in the Gospel. Think about that.”

Pope Francis also asked people in the square to pray for the passengers and crew members — and their families — of Malaysian Airlines flight that went missing March 8 after taking off from Kuala Lumpur on the way to Beijing.

NEXT: Pope says it’s important to have a sense of humor