Pope says it’s important to have a sense of humor 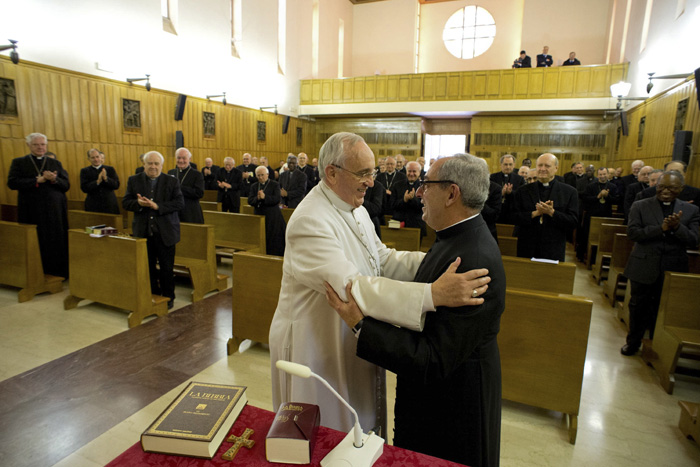 Pope Francis greets a clergyman at the and of his weeklong Lenten retreat in Ariccia, Italy, March 14. At the end of his retreat, Pope Francis said he and his closest collaborators at the Vatican "want to follow Jesus more closely, without losing hope in his promises and without losing a sense of humor." (CNS photo/L'Osservatore Romano via Reuters)

VATICAN CITY (CNS) — At the end of his Lenten retreat, Pope Francis said he and his closest collaborators at the Vatican “want to follow Jesus more closely, without losing hope in his promises and without losing a sense of humor.”

Before they left the retreat house, Pope Francis thanked Msgr. Angelo De Donatis, the pastor of St. Mark’s parish in the center of Rome, whom he had chosen to guide the Lenten retreat.

“Do you know Jesus so well through your work or are you friends?”

“We are returning home with a good seed — the seed of the word of God,” the pope told him. “The Lord will send the rain and that seed will grow. It will grow and bear fruit. We thank the Lord for the seed and for the rain he will send, but we also want to thank the sower.”

Pope Francis said Msgr. De Donatis really knew what he was doing. “He threw some seed here and he threw some there without knowing it — or pretending not to know — but he hit the mark.”

The 10 meditations offered by the monsignor focused on “the purification of the heart.”

While the meditations were not made public, the Vatican newspaper offered brief reports on their content. According to L’Osservatore Romano, Msgr. De Donatis began the final reflections March 13 talking about how no one could understand the value of God’s love using economics or commerce, which too often are the only way modern people determine the value of anything.

He told the story of a little boy in a first Communion class in his parish who asked him, “Do you know Jesus so well through your work or are you friends?” Msgr. De Donatis told the pope and Curia officials that the only way to truly know Jesus is through friendship and love.

PREVIOUS: Get a pocket Bible, read it during your commute, pope recommends

NEXT: Biggest downside of being pontiff is the paperwork, Pope Francis says