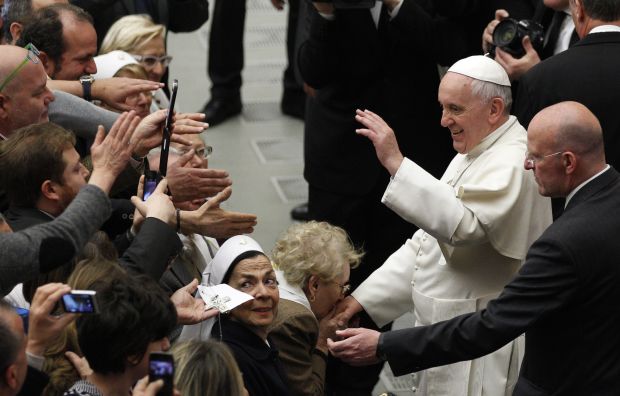 Pope Francis greets people during an audience with steelworkers and families from Terni, Amelia and Narni, Italy, at the Vatican March 20. (CNS photo/Paul Haring)

VATICAN CITY (CNS) — In making economic policies and decisions, solidarity is too often treated as “a dirty word,” yet the only way out of the global financial crisis is to put people — with their dignity and creativity — first, Pope Francis said.

Meeting March 20 with about 1,700 officials, employees, retirees and laid-off workers from a large steelworks in Terni, Italy, Pope Francis said each person will have to make some sacrifices in order to help the entire community.

“If everyone does his part, if they all put the human person and human dignity — not money — at the center of their concern, if they can consolidate an attitude of solidarity and fraternal sharing inspired by the Gospel, then it will be possible to get out of the swamp of an economic and employment situation that has been hard and difficult,” the pope said.

The workers from the Terni plant were joined by more than 5,000 family members and pilgrims from the Diocese of Terni, Amelia and Narni, including those who work with Catholic charities to distribute food, clothing and other necessities to the unemployed and their children.

Pope Francis said he had spoken to a young unemployed worker who said he and his wife and children have food thanks to their parish Caritas, “but I don’t know what it means to have the dignity of working and bringing home bread for my family.”

The purpose of a job is not just to earn money; it is one of the key ways people exercise their intellect, creativity and physical energy in order to provide for their needs and those of their families, the pope said. “If there is no work, this dignity is wounded.”

“Those who are unemployed or underemployed risk being placed on the margins of society and becoming victims of social exclusion,” he said. “Too often those without work — and I’m thinking particularly of young people without work today — slide into chronic discouragement or, worse, apathy.”

Unfortunately, the pope said, the current economic system “no longer seems able to create jobs because it has put an idol called money at the center of attention.”

The solution, he said, must be creative and courageous choices by business owners, entrepreneurs and artisans combined with solidarity and generosity on the part of the entire society.

NEXT: Pope to Mafiosi: Turn away now from the road to hell