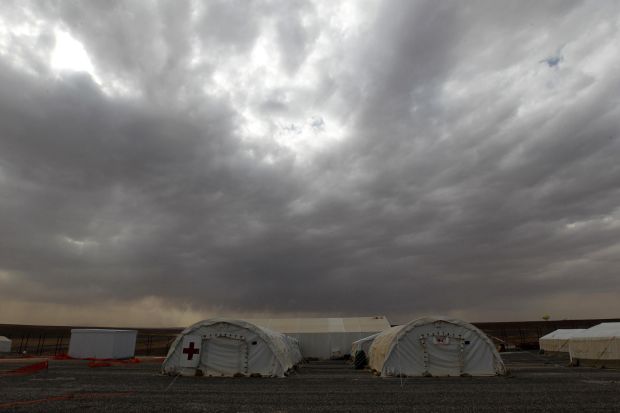 A view of part of the hospital at new Azraq Syrian Refugee camp, which is under construction, east of Amman,Jordan, March 25. Azraq Refugee Camp will open April 30, according to a U.N. official. (CNS photo/Muhammad Hamed, Reuters)

AZRAQ, Jordan (CNS) — This desolate dusty patch of desert near Jordan’s borders with Syria and Iraq is soon to be home to the latest victims of Syria’s three-year civil war.

U.N. officials warn that with increasing numbers of Syrians fleeing daily to Jordan — almost 800 in one 24-hour period in March — the opening of yet another refugee camp is imperative.

“This is what we are expecting to continue for the months to come,” Andrew Harper, U.N. refugee agency representative to Jordan, told reporters at the new Azraq camp.

“Zaatari (Jordan’s biggest camp with some 120,000 Syrians) and the host communities are completely full, so we need to mitigate the pressures on the host communities by establishing this camp,” he said of $64 million dollar facility, some 62 miles east of the capital, Amman.

But there’s a catch: a huge shortfall of international funds and money needed to run the camp. The international community has pledged just 16 percent of the $1.2 billion the U.N. has sought to help Syrian refugees in Jordan.

“How can we continue to do what we are doing if the international community is largely ignoring Jordan or taking it for granted?” Harper asked. He said the refugees are not solely Jordan’s problem, but are an international one, as the Syrian conflict shows no signs of letting up.

Both the United Nations and the Jordanian government admit that the bulk — about 80 percent of the 600,000 registered Syrian refugees — live in communities concentrated mainly in the northern border area, but are also scattered throughout the country.

The Catholic charity Caritas serves refugees in the various communities, because Syrians can become isolated in Jordanian towns and cities and are not aware of the services provided.

“Caritas is trying to help by working in different sectors to cover the gaps,” Omar Abawi of Caritas Jordan explained, adding that nearly half of the urban refugees are registered with his organization. Some have received first-time aid, while many more are multiple aid recipients. Refugees make use of Caritas’ medical clinics, receive hospital referrals, obtain some educational benefits in addition to basic necessities like milk, diapers, food.

Abawi said Caritas supports 36,000 families or 157,000 individuals — more than half women and children. But he admitted that many gaps remain in providing services for the Syrian refugees.

“They are suffering from exploitation. Only one-third of the urban Syrian refugee children attend school, while two-thirds are out of school, and this is one of the big problems,” he told Catholic News Service March 25.

“Mainly, they are working as child earners who assist their families with food and rental fees. Rent in the northern governorates has increased by 300 percent,” Abawi said, criticizing the exploitative practices by some Jordanian landlords against the Syrians.

“It’s a long-term conflict. All the emergencies programs will continue and become relief projects,” he added.

“We are coordinating with the U.N. agencies and other nongovernmental organizations to fill in the gaps as much as we can through coordination and case referrals,” he said.

Caritas is also experiencing a funding gap for the Syrian refugees.

“In 2013, we made 23 projects totaling $18 million. This year’s projection is around $16 million, but already Caritas has used $10 million out of the $16 million. We are still working to cover the other things,” Abawi explained.

The U.N. said the new Azraq camp will be three times bigger in size — about the space of 2,070 soccer fields — than Jordan’s largest refugee camp at Zaatari, some 31 miles away.

Zaatari is the second-biggest refugee camp in the world and Jordan’s fifth-largest city.

“But Azraq won’t be like Zaatari in so many ways,” said Bernadette Castle-Hollingworth, UNHCR senior field coordinator.

Zaatari seemed to spring up overnight in July 2012 when thousands of Syrians streamed over the border, and there was nowhere to put them. It has been plagued with water and electricity problems, rioting in the initial phase, and now dangerous sewage in its alleyways.

Castle-Hollingworth said Azraq’s first 5,300 housing units using “green” solar power energy will be filled around April 30, when the camp is expected to open its doors.

“Some lessons were learned from Zaatari. With the numbers of refugees arriving there is huge pressure on the response to provide services and infrastructure on time,” he said. “So it’s crucial now to develop this site as quickly as possible.”