Philippine cardinal praises both sides in peace deal for ‘wisdom’ 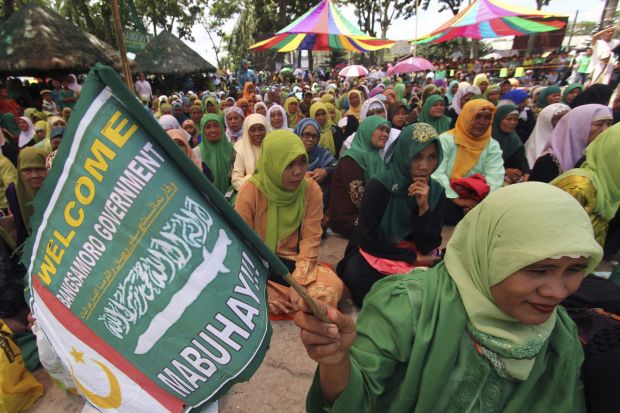 A Moro woman holds a flag of the Moro Islamic Liberation Front during a gathering in Pikit, Philippines, March 27. (CNS photo/Keith Bangcoco, Reuters)

MANILA, Philippines (CNS) — The Philippines’ newest cardinal was among 1,000 guests who witnessed the peace agreement between the government and the country’s largest Muslim rebel group.

Cotabato Cardinal Orlando Quevedo’s archdiocese in the southern island of Mindanao includes the main administrative camp for the rebels of the Moro Islamic Liberation Front. A number of ranking members of the front attended Oblate-run Notre Dame University, where the cardinal served as president. They have noted his long-standing empathy and understanding of the plight of the Muslims.

Cardinal Quevedo told reporters on the sidelines March 27 that he admired the determination of negotiators for the rebels and the government and “also their wisdom because the Bangsamoro has finally achieved their own fundamental aspiration for self-determination.”

In a speech, Al Haj Murad Ebrahim, chairman of the Moro Islamic Liberation Front, called the pact “the grandest articulation of our aspirations.” He said it finally restored the identity, powers and resources of all residents of Muslim-majority Mindanao, called “Bangsamoro.”

“These three things, which have been ours since time immemorial, unjustly taken through colonization and occupation, are now returned to us,” Murad said at the ceremony on the grounds of the presidential palace in Manila.

For nearly 40 years, the Muslim rebels fought for the right to self-determination, engaging government troops in skirmishes and forcing millions of residents to flee their homes. Approximately 120,000 people were killed.

The pact, which officials call the “Comprehensive Agreement on the Bangsamoro” creates a self-governing region in Mindanao.

The region to be called Bangsamoro — a name coined by the rebels for all residents of Muslim-majority Mindanao, including Christians and indigenous peoples — will have a parliamentary form of government. It will be able to generate its own revenues, collect a significant portion of royalties from natural resources in the area and form its own law enforcement, among wide-ranging powers. The central government in Manila will maintain national defense, currency and postal services.

This new region will supersede an existing autonomous region that was born out of a 1990s peace pact between the government and a smaller Muslim rebel group. That region, the Autonomous Region in Muslim Mindanao, is the poorest part of the country, and Philippine President Benigno Aquino called it a “failed experiment.”

“The huge imbalance between Muslim Mindanao and the rest of the country served to breed resentment and consequently insurgency,” Aquino said at the signing. “When the Bangsamoro people felt that they had no redress within the system, they then tried to address their grievances from outside of the system. We must therefore give them a significant boost up, so that they can catch up.”

Officials say the economic problems that plague the region now are a long way from the Christian versus Muslim conflict that dominated the struggles in the southern Philippines during Spanish colonial times through the early part of the 20th century.

Still, Cardinal Quevedo acknowledged there was room for even better understanding on the part of Catholics in the region.

“I know that living together with Muslims, which has been part of my long life in Mindanao, is something I appreciate very much, when I used to have my Muslim students interact with me at the university,” said Cardinal Quevedo. “So at the grass-roots level, in the marketplace, be friends with one another. Pray for one another. Live together in the community, and all those biases and mistrust can be somehow significantly reduced.”

“Let’s pray for the success of this peace agreement that promises lasting and just peace in our region of Mindanao,” said Cardinal Quevedo.

In a statement, Archbishop Socrates Villegas, president of the Catholic Bishops’ Conference of the Philippines, said the conference rejoiced “with our countrymen” over the signing. He urged the implementers of the agreement to pay special attention to “those who feel marginalized,” including smaller rebel factions not happy with the deal, and he pushed for development in the affected region.

“The promotion of total human development is long delayed. It cannot wait further. The people of Mindanao have been suffering for decades,” said Archbishop Villegas.