One can’t dialogue with Satan, pope says; the Bible is the best defense 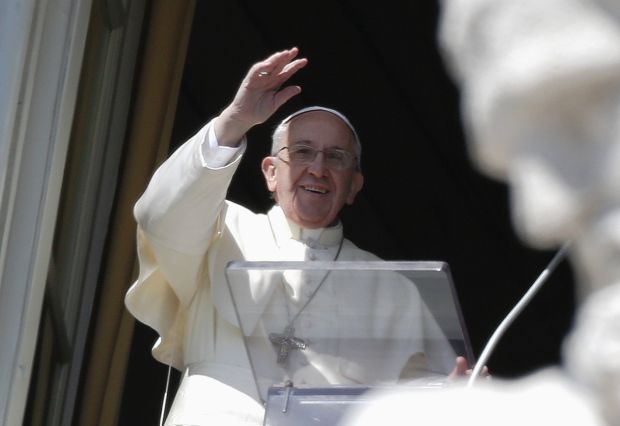 Pope Francis waves as he leads the Angelus from the window of his studio overlooking St. Peter's Square at the Vatican March 9. (CNS photo/Max Rossi, Reuters)

VATICAN CITY (CNS) — When temptation comes your way, don’t try to “dialogue” or argue with the devil, Pope Francis said, but seek refuge and strength in the words of the Bible.

Addressing tens of thousands of people gathered for the Angelus in St. Peter’s Square March 9, Pope Francis spoke about the Gospel of Matthew’s account of Jesus’ temptation in the desert.

“The tempter tried to divert Jesus from the Father’s plan, which was the path of sacrifice and love, of offering himself in expiation, and instead convince him to take the easy way of success and power,” the pope said.

Each time the devil tempts Jesus — asking him to transform stones into bread, throw himself from the top of the temple and see if angels would rescue him, or worship Satan in exchange for earthly power — Jesus responds by reciting Scripture, the pope said.

“Remember this,” Pope Francis told the crowd, “at times of temptation, in our temptations: No arguments with Satan; defend yourselves with the word of God.”

Pope Francis said Lent is a time for everyone to set out on the path of conversion and to prepare to renew their baptismal promises, including “renouncing Satan and all his works and his seductions — because he is a seducer — in order to walk the pathways of God.”

The pope also asked those gathered in St. Peter’s Square to pray for him and his collaborators in the Roman Curia during their March 9-14 Lenten retreat.

With more than 80 cardinals, archbishops and other top officials of Vatican offices, Pope Francis boarded a bus in the late afternoon to travel the 20 miles to a retreat house in Ariccia for joint reflection, prayer and silent meditation.

NEXT: Pope says religious must be witnesses to Gospel even in use of money