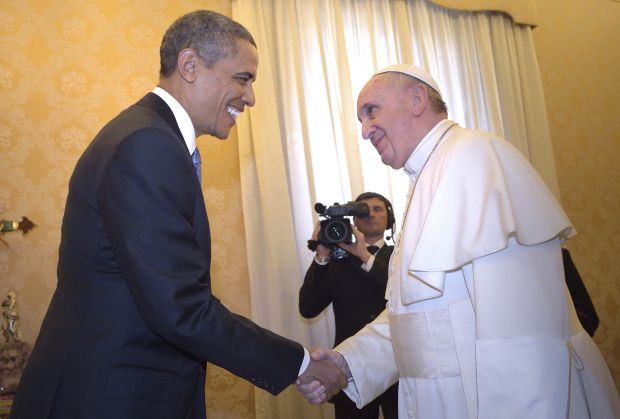 UPDATED -VATICAN CITY (CNS) — In their first encounter, Pope Francis received U.S. President Barack Obama at the Vatican March 27 for a discussion that touched on several areas of tension between the Catholic Church and the White House, including religious freedom and medical ethics.

During an unusually long 50-minute meeting, the two leaders discussed “questions of particular relevance for the church in (the U.S.), such as the exercise of the rights to religious freedom, life and conscientious objection as well as the issue of immigration reform,” the Vatican said in statement.

The mentions of religious freedom and conscientious objection presumably referred to the contraception mandate in the new health care law, which has become a major source of conflict between the administration and the church.

According to the Vatican statement, Pope Francis and Obama also had an “exchange of views on some current international themes, and it was hoped that in areas of conflict, there would be respect for humanitarian and international law and a negotiated solution between the parties involved.”

In September, Pope Francis launched a high-profile campaign against Obama’s proposal for military strikes to punish the government of President Bashar Assad for its presumed use of chemical weapons. The pope wrote to Russian President Vladimir Putin, host of a G-20 summit, decrying the “futile pursuit of a military solution,” and a few days later led a prayer vigil for peace in Syria that drew some 100,000 people to St. Peter’s Square.

The Vatican did highlight two points of harmony with Obama in the discussions: immigration reform, on which the administration’s position is closer to that of U.S. bishops than that of the Republican opposition; and a “common commitment to the eradication of trafficking in human persons in the world.” 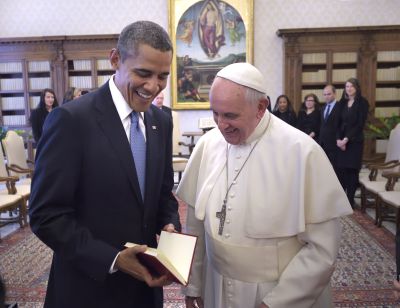 U.S. President Barack Obama accepts a gift from Pope Francis during a private audience at the Vatican March 27. The pope gave the president a copy of his apostolic exhortation, “Evangelii Gaudium” (“The Joy of the Gospel”). (CNS photo/Stefano Spaziani, pool)

Later in the day, at a joint news conference with Italian Prime Minister Matteo Renzi, Obama said he had spent the “largest bulk of the time” with the pope discussing “issues of the poor, the marginalized, those without opportunity and growing inequality” and the “challenges of conflict and how elusive peace is around the world,” particularly in the Middle East.

Obama said Pope Francis “did not touch in detail” on the contraception mandate, but that in the president’s subsequent meeting with Cardinal Pietro Parolin, Vatican secretary of state, “we discussed briefly the issue of making sure that conscience and religious freedom was (sic) observed in the context of applying the law.”

“I pledged to continue to dialogue with the U.S. conference of bishops to make sure we can strike the right balance” on the issue, Obama said.

At the end of their talk, Pope Francis gave Obama a bound edition of his apostolic exhortation “Evangelii Gaudium” (“The Joy of the Gospel”), published last November. The gift prompted the president to respond: “You know, I actually will probably read this in the Oval Office when I am deeply frustrated, and I am sure it will give me strength and will calm me.”

“I hope,” the pope replied with a laugh.

In a December speech, Obama quoted a passage from the exhortation in which the pope lamented: “How can it be that it is not a news item when an elderly homeless person dies of exposure, but it is news when the stock market loses two points?” 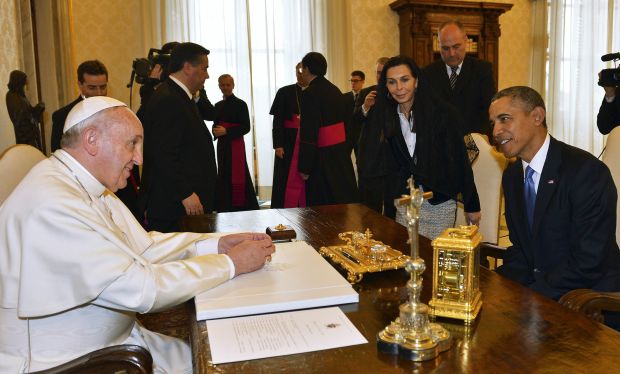 Pope Francis also presented Obama with a pair of bronze medallions, one commemorating the 17th-century construction of the colonnades around St. Peter’s Square; another portraying an angel that brings together the world’s North and South in “solidarity and peace founded on justice.”

“This gift is from the pope,” Pope Francis said of the first medallion. “But this other one is from Jorge Bergoglio. When I saw it, I said: “I’ll give to Obama, it’s the angel of peace.”

The president’s gift to the pope was a selection of fruit and vegetable seeds from the White House garden, in a box made from reclaimed wood used to build Baltimore’s Basilica of the National Shrine of the Assumption of the Blessed Virgin Mary, the first Catholic cathedral in the United States.

“If you have a chance to come to the White House, we can show you our garden as well,” Obama said.

“Of course,” the pope replied.

Organizers of the September 2015 World Meeting of Families have voiced hopes that Pope Francis will attend that event, which could be the occasion for a state visit to the U.S.

“I invited and urged him to come to the United States, telling him that people would be overjoyed to see him,” Obama said later.

Obama’s visit to the Vatican came in the course of a six-day international trip that included stops in the Netherlands and Belgium and was scheduled to end in Saudi Arabia. The day before his meeting with Pope Francis, Obama met with European Union and NATO officials in Brussels, where he discussed economic and strategic responses to Russia’s invasion of Ukraine earlier in the month.

The president’s motorcade entered the Vatican a few minutes after 10 a.m., under cloudy skies with temperatures in the low 50s. Archbishop Georg Ganswein, prefect of the papal household, greeted him in the San Damaso Courtyard of the Apostolic Palace, then led him upstairs to the pope’s private library, followed by Obama’s entourage, which included U.S. Secretary of State John Kerry; Susan Rice, the national security adviser, and Ambassador Ken Hackett, the U.S. envoy to the Holy See.

The pope greeted the president outside his library a few minutes before the appointed time of 10:30.

“Wonderful meeting you, I’m a great admirer,” Obama told the pope as they shook hands.

Inside the library, the two leaders sat down on either side of the pope’s desk, each with an interpreter beside him. Through his interpreter, Msgr. Mark Miles, the pope, who spoke in Spanish, could be heard telling the president: “I’d like you to feel really at home here.”

During an extended handshake at the end of the meeting, Obama told the pope: “My family has to be with me on this journey. They’ve been very strong. Pray for them. I would appreciate it.”

After his meeting with the pope, Obama met with Cardinal Parolin for more than half an hour. Kerry, Rice and Archbishop Dominique Mamberti, the Vatican’s foreign minister, also participated in that meeting.

The Obama administration requires that nearly all health insurance plans, including those offered by most Catholic universities and agencies, cover sterilizations, contraceptives and some abortion-inducing drugs, all of which are forbidden by the church’s moral teaching. The U.S. bishops have strenuously opposed the contraception mandate and have rejected existing exemptions as inadequate.

Legalized abortion and embryonic stem-cell research, which Obama supports and Catholic teaching forbids, have also been sources of conflict between the president and the church since the start of his administration, and were among the major topics of discussion during Obama’s 2009 visit with Pope Benedict XVI.

NEXT: Philippine cardinal praises both sides in peace deal for ‘wisdom’