Pope, in interview, suggests church could tolerate some civil unions 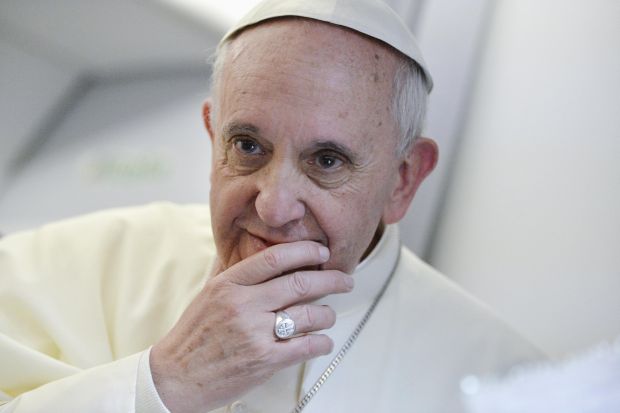 VATICAN CITY (CNS) — Pope Francis suggested the Catholic Church could tolerate some types of nonmarital civil unions as a practical measure to guarantee property rights and health care. He also said the church would not change its teaching against artificial birth control but should take care to apply it with “much mercy.”

In the wide-ranging conversation with the paper’s editor-in-chief, Ferruccio de Bortoli, the pope defended the church’s response to clerical sex abuse and lamented that popular mythology has turned him into a kind of papal superhero. He also addressed the role of retired Pope Benedict XVI and the church’s relations with China.

“Matrimony is between a man and a woman,” the pope said, but moves to “regulate diverse situations of cohabitation (are) driven by the need to regulate economic aspects among persons, as for instance to assure medical care.” Asked to what extent the church could understand this trend, he replied: “It is necessary to look at the diverse cases and evaluate them in their variety.”

Bishops around the world have differed in their responses to civil recognition of nonmarital unions. The president of the Pontifical Council for the Family said in February 2013 that some legal arrangements are justifiable to protect the inheritance rights of nonmarried couples. But until now, no pope has indicated even tentative acceptance of civil unions.

In the interview, Pope Francis praised Pope Paul VI’s 1968 encyclical “Humanae Vitae,” which prohibited the use of contraception.

In contradicting contemporary pressures for population control, Pope Paul’s “genius was prophetic, he had the courage to side against the majority, defend moral discipline, put a brake on the culture, oppose neo-Malthusianism, present and future,” Pope Francis said.

But he also noted that Pope Paul had instructed confessors to interpret his encyclical with “much mercy, attention to concrete situations.”

“The question is not whether to change the doctrine, but to go deeper and make sure that pastoral care takes account of situations and of what each person is able to do,” Pope Francis said.

The pope said birth control, like the predicament of divorced and civilly remarried Catholics, would be a topic of discussion at the Vatican in October at an extraordinary Synod of Bishops on the family. He said the synod would approach all such problems “in the light of profound reflection,” rather than casuistry, which he described as a superficial, pharisaical theology focused exclusively on particular cases.

The pope said he had welcomed the “intense discussion” at a February gathering of cardinals, where German Cardinal Walter Kasper gave a talk suggesting divorced and civilly remarried Catholics might sometimes be allowed to receive Communion even without an annulment of their first, sacramental marriages.

“Fraternal and open confrontations foster the growth of theological and pastoral thought,” he said. “I’m not afraid of this; on the contrary, I seek it.”

“Values are values, period,” he said. “I cannot say that, among the fingers of a hand, there is one less useful than another. That is why I cannot understand in what sense there could be negotiable values.”

Pope Francis said cases of sex abuse by priests had left “very profound wounds,” but that, starting with the pontificate of Pope Benedict XVI, the church has done “perhaps more than anyone” to solve the problem.

“Statistics on the phenomenon of violence against children are shocking, but they also clearly show the great majority of abuses occur in family and neighborhood settings,” Pope Francis said. “The Catholic Church is perhaps the only public institution to have acted with transparency and responsibility. No one else has done more. And yet the church is the only one attacked.”

Reflecting on his own colossal popularity, the pope criticized “ideological interpretations, a certain mythology of Pope Francis. When it is said, for instance, that he leaves the Vatican at night to go feed the tramps on Via Ottaviano. That never even occurred to me.”

“To portray the pope as a kind of superman, a type of star, strikes me as offensive,” he said. “The pope is a man who laughs, weeps, sleeps soundly and has friends like everybody else. A normal person.”

He acknowledged that he has continued his longtime practice of phoning people who write to him with their problems, including an 80-year old widow who lost her son, whom he calls once a month.

Pope Francis said he has sought out his predecessor Pope Benedict for advice and encouraged him to “go out and participate in the life of the church,” most recently by appearing at a Feb. 22 ceremony with the College of Cardinals in St. Peter’s Basilica.

“The pope emeritus is not a statue in a museum,” Pope Francis said. Noting that bishops never retired until after the Second Vatican Council, but that the practice has since become the norm, Pope Francis said the “same thing should happen with the pope emeritus. Benedict is the first and maybe there will be others. We don’t know.”

Asked about the Vatican’s lack of diplomatic relations with China, whose government requires Catholics to register with a state-controlled Catholic Patriotic Association and punishes members of the clandestine “underground” church, Pope Francis said he had written to Chinese President Xi Jinping “when he was elected, three days after me. And he answered me. There are some relations.”

NEXT: Catholic clergy in Crimea defend Ukraine’s right to self-determination