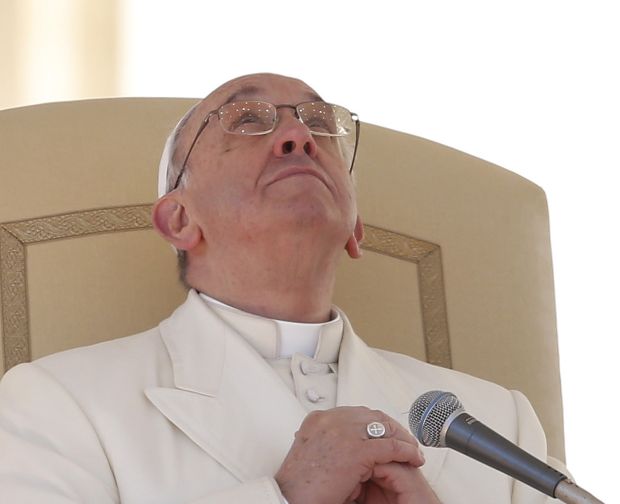 Pope Francis looks up as he leads his general audience in St. Peter's Square at the Vatican March 5. (CNS photo/Paul Haring)

VATICAN CITY (CNS) — Because his cassock doesn’t have a breast pocket, Pope Francis said he wears a cloth pouch under his white robes to carry the crucifix he took from a deceased priest.

Meeting March 6 with pastors of Rome parishes, Pope Francis said that while he was vicar general of the Archdiocese of Buenos Aires he went to pay his last respects to a Blessed Sacrament priest, an extremely popular confessor, who had died in his 90s.

In the crypt of the church, the priest’s body was lying there, but there were no flowers, he said. “I thought, this man forgave the sins of all the clergy of Buenos Aires, including mine, and not a single flower. So I went out to the florist’s.”

Then, the pope “confessed” that he “started preparing the coffin with the flowers and I looked at the rosary in his hand. Immediately that robber that is in each of us came out and while I arranged the flowers, I picked up the cross of the rosary and with a little effort, I pulled it off. I looked at him and said, ‘Give me half of your mercy.'”

He put the crucifix in his breast pocket and carried it there until his election as pope March 13, 2013. “But a pope’s shirts don’t have pockets,” so now he carries it in a cloth pouch under his cassock. “And when I start having a bad thought about someone, I always put my hand here,” he said, showing the priests where the crucifix is.

The pope’s annual Lenten meeting with Rome pastors focused on the priest’s call to be a minister of mercy. While he followed a prepared text, he added comments and anecdotes from his own life and ministry.

Repeating his frequent call to go out into the world and meet people where they are, Pope Francis told the priests that their ministry of mercy, which reaches its highest point in the sacrament of penance, is especially needed by “people who have left the church because they don’t want anyone to see their wounds.”

“There are many wounded people, people wounded by material problems, by scandals, including scandals within the church,” he said.

Pope Francis urged the pastors to devote time to hearing confessions and to avoid being either very lax or very strict.

“It’s normal that different confessors have different styles, but these differences cannot be ones of substance, that is, involving healthy moral doctrine and mercy,” he said.

Neither the very lax nor the very strict priest witnesses to Christ, because “neither takes seriously the person in front of him,” he said. “The rigorist, in fact, nails the person to the law as understood in a cold and rigid way; the indulgent, on the other hand, only appears merciful, but does not take seriously the problems of that person’s conscience, minimizing the sin.”

The first, he said, is “Do you cry?” Jesus was moved by people who seemed like “sheep without a shepherd,” and those in spiritual or physical pain, he said. A priest must be a “man of mercy, compassion, close to his people and the servant of all.”

“Aseptic priests — those who seem like they are working in a laboratory and are all clean and perfect — don’t help the church,” he said. The world is messy and filled with people who have been bloodied by the battles of life. “We priests have to be there, close to the people.”

The sick, the aged and children, he said, help priests learn to be merciful. “Do you know how to touch them? Or are you embarrassed,” the pope asked.

“At the end of time, those who will be allowed to contemplate the glorified flesh of Christ are only those who were not embarrassed to touch the flesh of their injured and excluded brothers and sisters,” he said.

Priests, he said, must have the compassion and the strength to “suffer for and with people, like a father and a mother suffer for their children and worry about them.”

Pope Francis spoke about another Buenos Aires priest, one who is a little younger than he is and a very popular confessor, who said that whenever he had scruples about forgiving too many people, “I go into the chapel and I tell (Jesus in) the tabernacle, ‘Sorry, it’s all your fault because I’m just following your example.'”

The pope also asked the priests if they prayed for their people in front of the tabernacle and pleaded with God to spare their parishioners just like Moses and Abraham argued with God to spare their people. Using the Italian word “pantaloni” — trousers — Pope Francis said the two Old Testament patriarchs “had guts,” and today’s priests must as well.

NEXT: The pope said what about civil unions?