Vatican to display Bibles on parchment, vellum and microchip 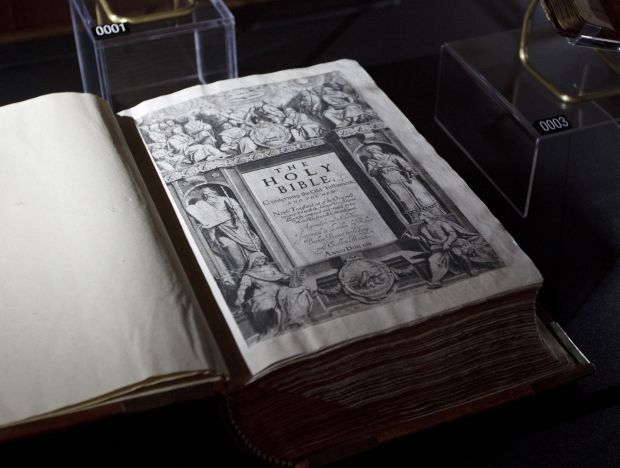 A 1611 first edition of the King James Bible is seen in the "Verbum Domini" exhibit of rare biblical texts and artifacts at the Vatican Feb. 29. (CNS photo/Paul Haring)

VATICAN CITY (CNS) — Nearly 200 rare Biblical texts on parchment and vellum are among the artifacts on view at the Vatican from April 2 through June 22, in the exhibition “Verbum Domini II: God’s Word Goes Out to the Nations.”

Along with three fragments of the Dead Sea scrolls and an original copy of the King James Bible, printed in 1611, visitors to the free exhibition will see the microchip Bible that traveled to the moon and back on Apollo 14 in 1971.

The Vatican Library is also putting on view, for the first time, an original folio from the Bodmer Papyri. Dating from around the year 200, the folio contains the Gospels of Luke and John. The library keeps this and other rare and fragile parchments in a specially built underground bunker maintained at very low humidity.

This exhibition is only the second on the Bible to be held inside the Vatican. The first, also mounted in the Braccio di Carlo Magno hall next to St. Peter’s Basilica, took place two years ago to mark the 400th anniversary of publication of the King James Bible.

“We enjoyed the overwhelming response to that exhibit and so we decided to do another, considerably expanded,” said Cary Summers, chief operating officer of the Museum of the Bible, which is scheduled to open in Washington, D.C., in 2017.

“Such an exhibit is a way to breach barriers between Catholics, Protestants and Jews,” said Summers at a news conference March 28. “The Bible has shaped and reshaped the world.”

The University of Cambridge has loaned a manuscript of the Bath Gospels from the 11th century, the sole complete translation of the Gospels in medieval English.

Showing the global reach of the Bible as well as the Jewish roots of Christianity is a copy — one of only three in existence — of a mid-17th century Torah that once belonged to the Jewish Kaifeng community in China.

“The study of art history and of history itself is impossible without study of the Bible. Yet many people know the Greeks myths but not the Bible,” said Msgr. Melchor Sanchez de Toca y Alameda, undersecretary of the Pontifical Council for Culture.

Until the Second Vatican Council, Catholics were not generally encouraged to study the Bible. Catholic Bible studies flourished for a time after Vatican II, but their popularity has waned in Western countries. According to Jesuit Father Jose Maria Abrego de Lacy, rector of the Pontifical Biblical Institute, 70 percent of Catholic Bible students today are in Africa and Asia.

Summers said a Bible exhibition in Havana in February attracted some 30,000 visitors to the city’s cathedral and was filmed by Cuban TV for broadcast on the state network.

NEXT: Surprise: Pope leads by example, is first to go to confession