Surprise: Pope leads by example, is first to go to confession 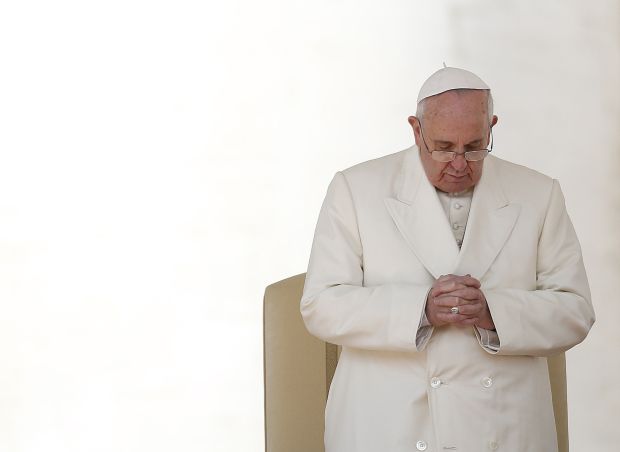 After an examination of conscience March 28, the pope and 61 priests moved into confessionals or to chairs set up against the walls to offer the sacrament to individual penitents.

However, as Msgr. Guido Marini, master of papal liturgical ceremonies, was showing which confessional the pope would be using to hear confessions, the pope pointed to another confessional nearby, indicating that he himself was going to first confess.

The pope, dressed in a simple white alb and purple stole, spent about three minutes kneeling before the priest’s open confessional and received absolution. The priest also clasped the pope’s hands and kissed his simple silver ring.

Pope Francis then went to another confessional and spent about 40 minutes hearing confessions.

In his homily, the pope said following God’s call to conversion is not supposed to happen only during Lent, but is a lifetime commitment. He also spoke about two key characteristics of Christian life: putting on a “new self, created in God’s way” and living in and sharing God’s love.

Renewal in Christ comes with baptism, which frees people from sin and welcomes them as children of God and members of Christ and his church, he said.

“This new life lets us see the world with different eyes without being distracted anymore by the things that don’t matter and that can’t last for long,” he said.

Shedding sinful behaviors and focusing on the essential become a daily commitment so that a life “deformed by sin” can become a life “illuminated by grace” from God.

When hearts are renewed and “created in God’s way,” good behavior follows, he said, for example: “always speaking the truth and steering clear of all lies; no stealing, but rather, sharing what one has with others, especially with those in need; not giving in to anger, rancor and revenge, but being meek, magnanimous and ready to forgive; not taking part in malicious gossip that ruins the good name of people, but looking mainly for the good side in everyone.”

The second aspect of Christian life is living in God’s eternal love, the pope said. God never tires of looking out for his children, both those who have lost their way and those who have remained faithful by his side.

Jesus, in fact, calls on everyone to imitate this same merciful love and become “credible disciples of Christ in the world,” he said.

God’s love cannot be held inside, “it’s open by its very nature, it spreads and is fruitful, it always generates new love,” he said.

In that missionary spirit, the penitential liturgy opened an initiative called “24 Hours for the Lord,” sponsored by the Pontifical Council for Promoting New Evangelization.

The council asked dioceses around the world to have at least one parish open all day and night March 28, so that anyone could go to confession and take part in eucharistic adoration. It’s part of the pope’s focus on celebrating God’s mercy and power of forgiveness.

Young people belonging to different parishes and different movements in Rome were to be out on the streets during the night, inviting their peers to go into the churches to pray, to confess or just to talk to a priest.

In his homily, Pope Francis praised the initiative and those who would be hitting the streets to share the joy of God’s mercy and invite others to discover a deeper relationship with Christ.

“Tell them that our father is waiting for us, our father forgives us, and even more, he celebrates,” the pope said.

Even with all of one’s sins and mistakes, God, “instead of scolding us, he celebrates,” the pope said. “And you have to tell this, tell this to lots of people today” so they can experience God’s mercy and love.

PREVIOUS: Vatican to display Bibles on parchment, vellum and microchip