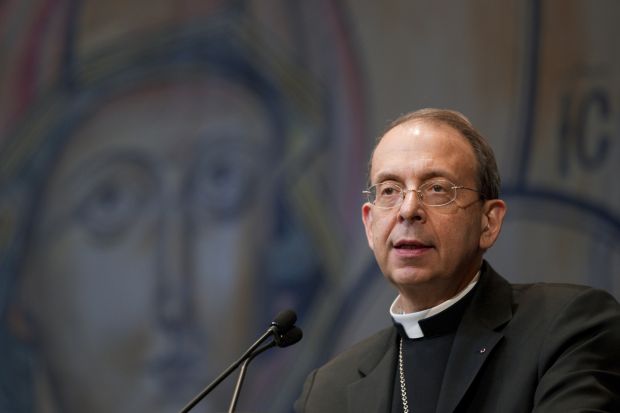 WASHINGTON (CNS) — Bearing witness to life involves living and sharing the good news of Jesus, and reflecting Christ’s love to those around us, Baltimore Archbishop William E. Lori said in an April 1 talk at The Catholic University of America in Washington.

Speaking to students, university staff and guests, Archbishop Lori connected what Blessed John Paul II called the Gospel of life with the new evangelization, saying that when Catholics understand the God-given dignity of life in all its stages, they are called to joyfully witness to their faith and share it with their friends and family, and, on a wider scale, through new means like social media.

“We need one another, we need the church, we need the Lord if our witness to the Gospel of life is to bear fruit, to change minds and hearts,” said Archbishop Lori.

Blessed John Paul “really exerted enormous influence on my priestly life and ministry, and in particular, he more than any other helped me to see what it truly means to be pro-life,” Archbishop Lori said. He noted he would be attending the April 27 canonization of Blesseds John Paul and John XXIII — “along with 4 million other people.”

He said Blessed John Paul purposely titled his 1995 encyclical “The Gospel of Life” (“Evangelium Vitae”) because our faith’s insights on God’s gift of life and love “flow from the very heart of the Gospel,” from the story of our being created in God’s image, and from the story of Jesus redeeming mankind through his life, death and resurrection.

From that understanding, the future saint called on people to prevail over our world’s “culture of death” by fostering a “culture of life” and promoting the dignity of human life in all its stages, from conception to natural death, Archbishop Lori said.

Pope Francis and Pope Benedict XVI have likewise called on Catholics to bear witness to life, he added, noting how Pope Francis has warned of a “throwaway culture” that threatens vulnerable human life.

The current pope, he said, has emphasized that witness must take place in “the context of Christ and his love for us”; Pope Benedict said Christians’ lives are changed “as the result of an encounter with the person of Christ.”

Archbishop Lori warned people to beware of labels and slogans that are often deceptive when it comes to life issues.

He noted that the group formerly known as the Hemlock Society now calls itself Compassion & Choices but only promotes the choice of taking “one’s own life with or without the help of a physician.” The archbishop also said the term “‘pro-choice’ … cloaks that we’re dealing not merely with a choice but a child.”

As chairman of the U.S. bishops’ Ad Hoc Committee for Religious Liberty, he has helped lead the church’s opposition to the federal Affordable Care Act’s mandate that would force Catholic institutions to violate their faith by providing employee health insurance coverage for abortion-inducing drugs, contraceptives and sterilization procedures.

Pointing out the interconnected threats to the defense of life and religious freedom, he said, “With constrictions on religious liberty, there is a growing danger that even those who conscientiously oppose abortion on moral and religious grounds, will be implicated in providing for abortions through health care insurance plans or in the use of their tax dollars.”

Those who struggle to promote life, traditional marriage and religious freedom should not let culture speak for them or define them, he said.

They should stand up “as an emergent movement in our culture that is eminently reasonable, rooted in faith, young and joyful, a movement determined to make a profound difference in our culture in the years ahead,” Archbishop Lori said.

He praised the witness to life offered by a growing number of youths and young adults every year at the March for Life in Washington, which he said resembles the enthusiasm and spirit of faith in the pope’s World Youth Day gatherings.

Archbishop Lori encouraged young Catholics to look to Mary for strength and guidance as they bear witness to Christ and his Gospel of life.

“Thank you for your devotion to the Gospel, to the cause of life, to human dignity,” he said. “You give us all so much hope for the future!”

Zimmermann is editor of the Catholic Standard, archdiocesan newspaper in Washington.