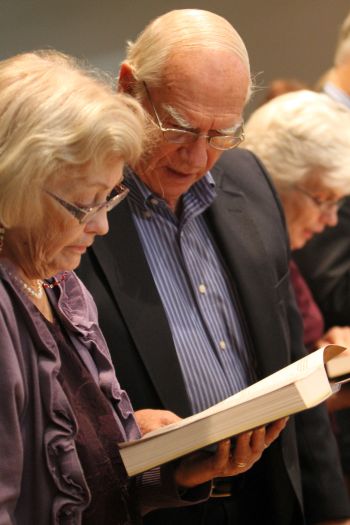 Cathy and Richard Freiburger read the profession of faith during Mass at St. John Nepomucene Church in Bohemia, N.Y., on the first Sunday of Advent in 2011. That day marked the first time the new English version of the Roman Missal was used in parishes throughout the U.S. (CNS photo/Gregory A. Shemitz, Long Island Catholic)

WASHINGTON (CNS) — A survey of attitudes among priests and lay parish leaders about the revised Roman Missal found just under half dislike the changes to the Mass introduced in the U.S. in 2011, and 75 percent think the language is “awkward and distracting.”

Priests, more strongly than laypeople, dislike the liturgical changes, the survey said, with 52 percent saying they don’t like the new texts. Among the lay leaders, 29 percent said they dislike the texts.

Three quarters of the survey participants agreed that the language of the new text is “awkward and distracting,” and half said the translation “urgently needs to be revised.” Just 23 percent said they were confident “that the views of priests will be taken seriously in future decisions about liturgical translation.”

Msgr. Richard Hilgartner, executive director of the Secretariat of Divine Worship at the U.S. Conference of Catholic Bishops, told Catholic News Service that the survey suggests “there are some things that need to be examined, because clearly there is divided opinion.” But he added that there has been no impetus from among the U.S. bishops to change anything and he cautioned that the survey leaves many unanswered questions.

For instance, he said, it’s impossible to tell from the data released whether respondents object to the more formal style of the translation overall or to specific words chosen. He also raised questions about whether the number of responses represent a meaningful sample of sentiment about the translation.

Msgr. Hilgartner’s office oversaw the process of translation and adoption of the new missal in cooperation with the Vatican and the International Committee on English in the Liturgy.

The survey conducted by Georgetown University’s Center for Applied Research in the Apostolate analyzed responses from 519 people to an invitation sent to 6,000 randomly selected parishes for the center’s National Survey of Catholic Parishes.

Participants were asked to choose among several responses to questions about their attitude toward the new texts. The five choices were:

— “I haven’t noticed much difference between this text and the previous one,” chosen by 6 percent overall, by 5 percent of clergy and 13 percent of lay leaders.

— “Before it was introduced I was apprehensive about it and I still don’t like it,” chosen by 38 percent overall, by 41 percent of clergy and 19 percent of lay respondents.

— “Before it was introduced I was looking forward to it, but I’ve changed my mind and don’t like it,” chosen by 11 percent overall, including 11 percent of clergy and 10 percent of lay leaders.

— “Before it was introduced I was apprehensive about it, but I’ve changed my mind and I like it,” chosen by 17 percent overall, including 15 percent of clergy and 26 percent of laity.

— “Before it was introduced I was looking forward to it and I still like it,” chosen by 28 percent overall, including 27 percent of clergy and 33 percent of laity.

Participants also were asked whether they agree or disagree with eight statements about the Revised Missal, using a five-point range for how strongly they feel. That’s where 75 percent were counted as agreeing that the text is awkward and distracting and half said it “urgently needs to be revised.”

The questions dealing with the missal were commissioned by St. John’s School of Theology Seminary in Collegeville, Minn., to be included in CARA’s regular survey.

A similar survey of priests about the translation released last May found 59 percent of priests who responded disliked the translation. That survey was conducted by the Godfrey Diekmann, OSB Center for Patristics and Liturgical Studies, also at St. John’s.

NEXT: Faith leads young man with cancer to resolve to live life to the utmost